This is submission about what happened last night at Loy Kratong.

Last night I went out for Loy Kratong to the Chao Phraya River with my long-time girlfriend. While we had a good time initially, one thing really pissed me off. My girlfriend had gotten us both two beautiful Krathongs and after lighting the incense sticks, candles and waiting for her to do her prayers, we handed them to a guy who would lower them to the water for us (too far to reach by hand). Both feeling good, we watched them float away and then something happened I hadn't counted on. About 5-10 meters down river on a concrete support pylon for a bridge a couple of gutter rats were busy fishing them back out of the water (see picture at the end) and looking for any coins that might have been placed in them. They didn't do this in any respectful way either, they just grabbed them out of the water, tipped them into a sieve and threw any leftovers back into the water like garbage.

This pissed me of for two reasons. Firstly, both of us had taken the time to show our respect for what Loy Kratong meant. Secondly, and more important to myself, my girlfriend knew that a close family member of myself (whom she has met) was very sick and she had said that she wanted to say a special prayer for them too. The way those guys behaved, tossing the remnants of the Kratong after their coins search into the water like garbage, right in view of the people that had put them into the water, would be about the same as if someone back home had grabbed the flowers from a funeral, while the funeral was still going on! I was ready to grab the nearest thing and throw it at those bastards. She said that many people didn’t like it that this was happening, but no one did anything. Best of all, there were quite a few police about and none of them cared one little bit.

To sum it up, I was utterly disgusted with the behaviour of those two guys. The fact that my girlfriend had specially asked me for the full name of my relative so she could include them in her prayer, I felt like those guys had pissed on that prayer.

I know that Thai people are very tolerant, but in this case I came only up with WTF?!? If someone would treat offerings that were left at a spirit house or temple that way, I am sure most regular Thais would find a way to stop them, if not beat the s**t out of them. I’m also certain that if someone very important was to place his Kratong in the river and this was to happen, the police would probably show theses bastards the error of their ways immediately!

One thing is for sure, if we go down to the Chao Phraya River again next year, my girlfriend will organise the Krathongs for us again, while I will organise several shopping bags of over-ripe tomatoes. So if any of you readers happen to be around for Loy Kratong next year and spot a farang along the river using this gutter trash for target practice, feel free to come up and join in. Thais that are pissed of with this gutter trash throwing their Kratong back into the river like garbage are also most welcome to join in. I would love to get feedback from any of your Thai readers to hear if they feel what these guys did is appropriate.

Maybe the TAT should consider using the picture provided as advertising Loy Kratong, as this is what farangs get to see.

In case you’re wondering, yes I am still pissed off! 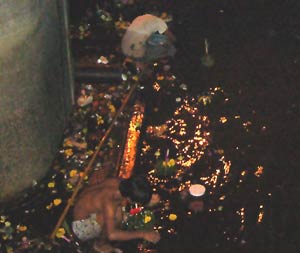 Not good at all.