When I last submitted an entry I was heading back to Australia for radiation therapy. So after 2 months of daily doses I was back in Thailand for all of September to recover a bit – before I start chemo. Before I went to Australia I had produced several diagrams and plans of a house to build on our land behind the woodyard. The wife engaged an engineer to convert these into detailed plans ready for us to start building.

The wife had a bit of an argument with the family, so decided she didn’t want to live next to the woodyard. So she bought a plot of land in the village and got the engineer to commence work. Started by building a playground for the kids; grass lawn with sprinkler system, small swimming pool, and mushroom shaped playhouse.

Then when I got back we redesigned our original plans to scale things back to a small (by farang standards) house with basically 3 rooms. Kitchen (with attached small bathroom), living room [7x11mtr] and a large bedroom [4×8.5mtr] that’s upstairs but at right angles to the living room. There’s plenty of empty space under the bedroom for garage/workshop/gym/whatever. The last thing we did before we left for Australia was to add a decent sized bathroom. But the main feature when seen from the road is the playhouse for the kids, with its bright red roof.

The construction is known in the village as “Bahn Dog Het”, which simply means “Mushroom House”. But it sounds in English so much like “Dogs Head” that in the family it’s referred to as “Bahn hua ma”, which in Thai is “Dog Head House”. And the wife hates this name with a passion – so of course it’s going to stick.

I had expressed my desire to have the upstairs bedroom constructed of wood, so while I was in Australia the wife bought an old house to get some decent flooring. Even though we have a woodyard most of the timber is imported as saw logs from Malaysia and is of fairly low quality with a tendency to warp and split. The old house was duly pulled apart 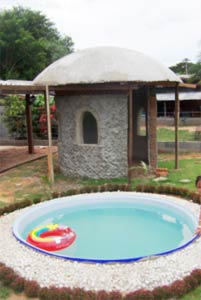 and transported to our site, where the timber is being reused. The house was being sold as the grandpa who lived there had died and his family now wanted something a bit more modern. So the wife organised a pig’s head and a ceremony to convince the spirit of the old man to stay with his family and not come with the house.

There are so many building scams in Thailand that the wife has had a tight control over the building process. The engineer is on a fixed price for his crew to provide all the manpower, and the wife buys all the materials. She’s known by all the suppliers in town as the daughter of the woodyard, so gets trade price for everything and there’s no room for collusion or price-fixing between the supplier and builder as normally happens.

And it’s not only farang who get caught in scams. One of the suppliers is also building a new house – it’s a huge 6 million baht affair with room for the business underneath. The first builder they employed was going well until they overpaid him on progress payments, and he skipped out leaving all his workers unpaid. They had real trouble getting another builder, as most would just look at the site and declare that the construction was such a mess that it wasn’t worth their reputation getting involved. Finally they found a new builder but he doesn’t seem able to read plans or take advice and is busy building something that he wants – much to the consternation of the owner. I just thank my lucky stars that the wife is in the building industry and has such a gift with words that she could convert the pope to Buddhism.

I love driving in Thailand. The roads are generally of a reasonable quality and there are few real hassles. In Australia it’s usual to stick the vehicle into cruise control and the brain into neutral, but in Thailand you must be fully alert at all times. It’s nothing to be barrelling along at speed and have a farm truck just pull out in front of you doing about 5k. I normally like to travel at 110 to 120 kph, but most traffic travels a lot slower (representing the number of pickups doing 80 – 100) and all heavy trucks which by law are not allowed to exceed 80. But many are so overloaded that they have trouble doing even 10 kilometres up any hill. But it’s also a country where money controls everything, so it’s nothing to be passed by a procession of Mercedes and BMWs doing 160-180. It would be a brave cop who pulled them over.

As with everything in Thailand there is a degree of corruption in building the roads; so even a brand new road will have been built of sub-standard materials so will not stand up to overweight loads. Consequently will require patching and fixes within a few months. For instance it was just 3 months ago Stick commented with relief that the highway improvement up to Korat had finally been finished, but even now sections of this new work are already being patched.

After 2 months of daily radiation doses aimed into my lower abdomen, it’s fair to say I have a reasonable case of the shits. So travelling around Thailand bought me into frequent contact with the usual toilet of Asia – the squatter. One of the good things about travelling in Thailand is that every petrol station will have (reasonably) clean restrooms, albeit with the infamous squatter. We all remember our first experience of trying to have a crap on one of these. You get half-way through and are then seized by devastating cramps in the thighs. You can’t stop and you can’t continue; an excruciating dilemma. I would strongly recommend to any first timers who plan to get away from the tourist resorts to spend some time before travelling practising both squatting and sitting cross legged.

While we’re waiting for our house to be completed we are renting a place in town. Unfortunately my need for chemotherapy means the wife and I returned to Australia leaving her younger sister looking after our 2 infants and our 15 year old. Couple days before we were due to fly back to Australia it comes to light that the older daughter has been wagging school and gallivanting around on her motorsai. So as part of her punishment she was sent back to live with the grandparents at the woodyard. Sometimes I wish I believed in a god, then I could say “God save me from the antics of teenagers”. She eats a packet of Panadol and ends up in hospital.

While we’re at the hospital the local emergency service (a tatty old diesel pickup that roars around town and probably kills more people from the horrific black smoke that gushes from the exhaust than they save by taking people to hospital) turns up with a pile of injured and dieing. Seems that a couple of local gangs of youths had a bit of a fight at one of the restaurants. In a bout of exaggerated bravado one of the youths tossed in a grenade. Wrong move. He didn’t chuck it far enough and was one of the 2 boys killed by the blast, while a bunch of the others received shrapnel wounds. Som Nam Naa – serves him right, but generally shortened to just Som in conversation.

One of the main problems with Panadol is that it can cause severe problems to the liver and kidneys. So in a small-town hospital in outback Thailand the treatment involves flushing the system for 4 days with an orange drink being delivered through the nose. I think the treatment is as much to teach the patient a lesson as it is to fix them. Let’s face it, simply drinking the mixture would have the same effect but wouldn’t deliver the same message. So there’s the young girl lying in bed for 4 days having orange drink (nam som) delivered by a tube in her nose. Som nam naa.

But it’s still a very worrying thing to have to fly out while your daughter is still in hospital after a suicide attempt. I just have to get this chemotherapy behind me so we can get back to Thailand and try to bring a bit of stability back to the family in our new house.

All of the locals I have spoken to seem to consider it normal that building costs spiral during construction of a house. I have been told that the rule of thumb is two times the initial estimate (NOT a fixed quote). Seems crazy!

Thai Lies And Wondering Why