On a past trip to Bangkok I stayed at the Bourbon Street Hotel, Soi 22. I'd been staying there lately because I usually have my lady's daughter and sister with us, at least part of the time, and the "bar scene" is much less in-your-face around there, yet, being close to Sukhumvit, it is easy to get around to see my expat friends in the area at night when I hang around in Bangkok a couple days, before heading up to Surin. It's a smaller hotel, inexpensive, but well kept up. It's owned by an American guy from New Orleans, named Doug, a nice and friendly guy, who has a great Cajun/Creole restaurant on the bottom floor, named, appropriately enough, The Bourbon Street Restaurant. They also have great Thai food according to the wife, who is an expert, and many fine and tasty farang foods and dishes as well. They have a baked Red Snapper in white sauce that is the best I've ever had, anywhere, and I'm from Boston. We take our fish seriously there.

I had booked three rooms at the Bourbon Street Hotel for this trip. Two rooms for the night of the 26th of December, the night my friend and I were supposed to arrive, and one room for the morning of the 29th, when my lady, her sister, and daughter were to arrive. One room for me and my lady, one room for my buddy, and one room for Sis and daughter. The night I arrived, late on the 26th, I re-confirmed these reservations with the lady at the desk, and was told that we were all set. "No plublum Mr. Cent."

Well, there was a problem. Seems on the 28th a fellow staying at the hotel had taken sick. He wasn't going to check out now on the 29th as he had planned, as he was too ill. Mr. Cent is then informed, the morning my family was to arrive, of this little "plublum". The hotel is booked. There will be no third room. Not for two days. Maybe. Shit! It's New Year's weekend. Everything seems to be pretty much booked up. Oh, there was a room available for the 29th. But only for that day. The 30th and 31st were booked solid. I argued a bit with the boss lady over this, but didn't get anywhere. "Man sick. Man not check out. Have no loom." went the argument. So a few possibilities were explored for alternative accommodations. Seems only the more expensive places had rooms available.

The family arrived later that morning. We got the room for the one day, and got them settled in. I explained to Sis about the rooms, and we decided to walk around the area, and check out the other hotels. If they needed to go to another hotel we wanted it to be as close as possible. Logistics you know.

Later in the afternoon, after we ate some lunch, we did just that. We left the hotel and went into different hotels to check them out, and get some prices. My friend had used a small hotel nearby for a short stay once. He said it was real close, actually right behind, the Bourbon Street Hotel, down a small alleyway of a Soi. He said it was cheap, but clean, and seemed safe enough for a couple of days stay. We decided to check it out. What the hell. It's only for a couple of days right?

We followed my friend as we left Bourbon Street Hotel, walked around the corner to the left and onto Soi 22. Walking maybe 30 yards, there was a Soi, actually a wide alley, on our left. We turned into the Soi and started walking down the street towards the end, where my friend said the hotel was. This Soi was a dead end street. The hotel was the last building on the right.

As we approached the place I was already a bit dubious about the nature of this area. There were many Thai people sitting around in front of the buildings along the Soi, all seeming to stop whatever they were doing to watch us as we passed by. There seemed to be a lot of younger guys hanging around, not doing much of anything from what I could see. It seemed we had stepped into a totally different Bangkok, the real Bangkok. Nothing at all like the touristy area on the main road, Soi 22. Seedy would be the word to describe the feeling I got here I guess. But, we were there already, might as well check the hotel out. Turned out it was not suitable, to say the least.

Cheap? Yeah, 450 baht a day I think it was, maybe even 350. It was cheap. We checked out an available room. Yeah right! No windows, no rug, tiny bathroom, etc. Typical "short time" hotel really. I told my friend, "What the hell were you thinking? I can't let my daughter and Sis stay here!"

"Well it is cheap, and close, and only for two days." he says to this.

"Yeah, okay. You stay here then, and they can take your room!" I quipped. He didn't seem to like that idea did he? No. So I thank the girl for showing us the room, and we leave to walk back to Soi 22.

As we stroll on down the Soi toward the main street I notice a cage hanging out front of one of the many small wooden shops along the sidewalk. I amble over, and see there is a mammal, quite large actually, inside the cage. Looked to me like a small-ish weasel, or something similar. Sis and my friend come over once I called to them, "C'mere. Look at this!" My friend and I checked out the little beast, talking with each other, wondering exactly what the heck it is. I turn to Sis and say, "What is it?"

"Oh yeah?" I say, and continue talking to my friend. We realize it's the Thai version of a mongoose. I question Sis some more about this, and what she tells us confirms our conclusion that, yep, it's some sort of Asian mongoose.

It was a beautiful creature really. Very sleek and muscular, a pointed snout, it had black shiny eyes that gleamed with an obvious intelligence. The face on it looked rather like a racoon's, without the markings and thick fur. It had little whiskers twitching around it's moist black nose, which sniffed at us like a puppy would. It was kind of like a large ferret, which a lot of people in the states have taken to keeping as pets. A curious, amusing, and friendly animal.

"What the name for this? How do you say in Thai?" I ask Sis.

She looks at me and says, "Pang pawn."

"What? Say again." I say, trying to catch the correct pronunciation for the creature.

Then, turning her chubby cheeked, smiling face up to me, she says, "Thai eat."

It figures, doesn't it? 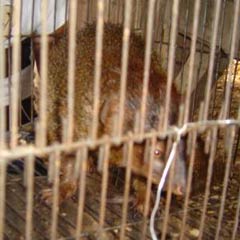 PS We did get a nice room at a decent rate in the Regency close by for them.