I've been back from the LOS now for three weeks. I hate it. I miss the village life and sunshine. I miss fishing every afternoon / evening. I'll be back for a couple weeks though around the 9th of April. So I guess I can't whine too much really. If it snows one more time here in Boston though I'm gonna fucking run down the street screaming, tearing hunks of hair outta my skull!

I did get to miss all the excitement one Tuesday a couple weeks ago at the Isaan village house. For which I may be thankful for, and which may even have saved me from a serious injury, possibly.

The wife called me one Tuesday night from Isaan. Woke my tired, still jet lagged, and stressed out ass up. She sounded funny, as though she was trying to remain calm, but actually was excited about something. I know my woman quite well now, and can usually pick up on her hidden signals and emotions now-a-days. Wait'll I write about the fights! (One between me and her, and one between her and Sis) Trouble in paradise you say? Nah. Interesting story though.

My wife tells me on the phone this night that we had a "snay 'n how" …………. which I finally interpreted, after a few minutes confusion, to mean "a snake in the house!"

"Holy shit! Where?" I queried her in excitement.

"In kighen" In the kitchen!

"Where in the kitchen?"

"Wife, is this a snake you bought to eat?"

"NO! NO! NO! Not insigh, no eat darling. (This said in exasperation, as if she would never deign to eat a snake. How the fuck am I to know? She'll eat damned near anything else! I thought maybe she was excited about a new dish to eat, maybe.) Under the refrige!"

"Uh, which refrigerator darling?" (We have three in the kitchen areas.)

Oh. That's right. We have four reefers, including that one. How the hell did it get inside there? I just put up a good batch of chicken wire on the blue painted steel bars that surround around the whole kitchen area. To keep out the cats and the fucking chickens. The steel bars keep the crooks out. Mainly because one morning I went out to the sink to get my coffee cup and stepped on a big pile of green chicken shit I was still too sleepy to notice underfoot. I vowed that day to suspend the chickens kitchen privileges, and went out and bought a roll of chicken wire. It was up that same afternoon.

"Wife, how'd the snake get inside through my new chicken wire fencing?"

Great, I go to the trouble to fix this problem and Mama just leaves the gate open for her friggin' cat. Silly village folk.

"What kinda snake was it, Wife?"

Same her arm? What the hell?

"Big. Okay, but what kind of snay dear?"

Ah shit. Now I got a fucking cobra, a big one, maybe what, a very poisonous King Cobra, under the refrigerator of my Isaan kitchen? Great. Maybe an Isaan Spitting Cobra? The very reefer, now shut off, as it is not being used at present, that we have stowed some tools and supplies in. The very same reefer that I was rumaging around in and under just last week it seems while putting up said chicken wire fence. Shit!

"Where is the snake now, Wife?"

"How did you see it under the frige?"

(This is a commercial reefer, such as the ones you open the top front and get your beer, cola, whatever, from down inside, very deep, and if a snake got under it and went back to the wall it sits against it would be very hard to see the damned thing, until it bit your damned ankle as you stand there disturbing the venomous fucker underneath.)

"Mama's cat see! I see cat look under frige. Not go away. Make want to kill snay. (Hissing and growling at the snake I interptet this to mean.) Me look under fridge where cat look. See snay!"

"What did you do when you saw the big cobra dear?"

"So did the men from the village eat the snake darling?"

(I know someone ate the damned thing. No way they just killed the thing and threw it away! I imagine it'd be tasty with the right noodles and sauces.

Nothing like getting the weekly news from back home in Isaan.

Jesus. I ain't never had a cobra in my kitchen before. That's a first after all the years I've been up there. Anyone know where I can buy an anti-venom kit for Cobra bite? 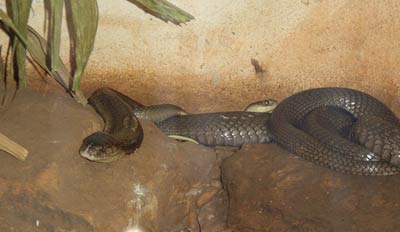 Sounds like you chose the right time to be back in Boston.

Bringing Her Back Home

Who Would Have Thought Part 2?