After the first day with the family in the paddy fields, the sun had gone down and my lady and I were waiting for a lift to the city of Roi Et. She knew of a hotel in the city, but we hadn’t been there yet and it had not been booked, so I was doubtful if we would be able to stay there.

At last the brother-in-law was ready and off we went. There were four adults including me, and three children in the vehicle.

We arrived outside the hotel in Roi Et, imaginatively called the Roi Et City Hotel. Actually I was pleasantly surprised. It is a very nice hotel. We were able to check in to one of the best rooms at 990 baht per night. During the check in the family were milling around, and I wondered what they were waiting for. My lady friend explained that they wanted to see the room. They had never been in a hotel before.

So everybody trooped up to the room. They were suitably impressed, but in the meantime I was longing for a shower. As explained in a previous article, I had been up since 6.30 a.m., travelling for 6 hours, and then whisked off to see the family with no break for a shower and a bit of R & R. So while they were admiring the f**king room I went for a quiet dump. Oh what a relief to sit on Mr. Crapper’s best invention for a few minutes, and dreaming of the “family” taking a hike. (One small complaint about the hotel – they didn’t have the bum spray that most hotels in LOS have. That is one thing I really like about LOS. Most hygienic)

No such luck. When I emerged it was explained to me that I should take them all for a meal. OK I wanted some fodder anyway, but I would have preferred a different priority. We ate at a little restaurant just around the corner, and I suppose it cost me about 1,000 baht. I was just imbibing my second beer when the “family” suddenly got to their feet, and went. Rather a sudden move but WTF, at least they’re gone.

So at about 9.30p.m. I’m able to go to the room at last and indulge in what I was dreaming of for most of the day. A lovely night after that, and I leave the details to your imagination.

Rose at about 8.30a.m., and went for breakfast which was included in the room price. I had a very good “American” breakfast. (wherever you go the same breakfast is called “English” in England and Wales, “Irish” in Ireland, and “American” in most other places throughout the world) As is my wont, I cleared the plate, and the lovely head waitress was quite concerned and asked me if I wanted another breakfast to fill myself up. I couldn’t eat any more, but it was very nice of her to offer, and she did the same every day we were there. I asked my lady friend if I would have to pay for another plate and she said no, the waitress wanted me to be satisfied, and I would not be charged. What a great service!

The plan that day was to visit the family farm again, but I wanted to spend as little time out there as possible, so I dragged out the time as much as I could. Looked around Roi Et for a bit, found an internet cafe, and spent time messing around on the internet.

OK, I couldn’t drag it out any longer, so we asked the hotel to get us a taxi. No taxis! Ok we had a minibus and driver.

Stopped on the way to buy beef!!!! Until that time every Thai I had met would not touch beef. Obviously this family were not practising Buddhists. So I paid for a pile of beef, a slice of something black with white markings (which was obviously off a cow), and a clear plastic bag of blood. The sort of bag they give a goldfish in at fairgrounds.

When we arrived at the farm the bag of goodies were handed to the old lady, and she proceeded to cut up the meat, and start cooking.

I won’t bore you with the events of the day, but there were a few things which amazed me, and I have to explain.

At one point the old lady was squatting in amongst the stalks where the rice had already been cut, and she was digging into the earth with a small shovel. I asked what was happening, and was told to watch her up close. Now bear in mind that the fields are bone dry. Obviously in the rainy season the fields fill with water which is held in by the dykes while the rice grows, but it is now dry. (November)

I watched her, and she was digging down maybe about 30 cms., and pulling out small crabs!!!! I hear you ask how she knew where to dig, and I asked the same question. Well there are holes through which the crabs breath, and she dug there. I attach a photo of a hole, and circled it in red. I had a go, and when I grabbed the crab it had me with its little pincers and drew blood between my thumb and index finger. Little bastard. They are only small –body about 5 or 6 cms. diameter – but they are very quick, with quite a grip. Made me f**king jump anyway, which gave everybody a laugh. They were then thrown into a bucket and used for food. 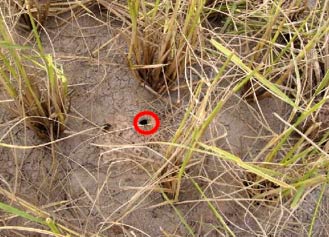 A section of the fields is probably deeper than the other fields and water remains there forming a pond which is teeming with fish. They had a pole with four nasty looking metal spikes at one end. So they speared some fish to add to the pot. It was absolutely amazing to me that these rice fields produce rice, crabs and fish – a pretty good diet.

That night we got a lift back to Roi Et again, and again the truck was full. This time we met in Roi Et a cousin who was 18 years old and her friend. They were both students. Yes, you guessed it. They came for a meal also, and they guided us to a seafood restaurant. That meal cost me 3900 baht!

Well this story is going on much longer than I thought. I’ll end it here which is at the end of the second day, and continue in my next submission. The next one will include a story about hiring a pick up truck – unbelievable. Only in Thailand.

I thought the whole family was going to stay in the hotel room for the night! Sounds like they were taking the piss with that second meal…