Well I’ve travelled North with my current lady, and a long and tedious journey it was.

We arrived at the house that her mother owns, her father being dead some time. I looked at the place in fascination. Her brother-in-law had gone to the fields, and nobody else was there to see my obvious curiosity apart from my lady friend.

There was a large yard, and the house was built to one side. It was completely built of wood, and on stilts about 9 feet (3 metres) off the ground. There were some rickety wooden steps leading up to the entrance, but these steps were roughly 1 ft. 6 in. (45 cm) between steps. That is a very high step even for a farang, and how the old lady managed to get up them surprised me. I suppose they make them high to keep out as many rodents and snakes as they can.

It was pretty bare inside, and the toilet facilities (underneath the house) were primitive. I’m sure you can imagine.

After looking around for a while we set off for the fields where all the family were working. It was about 500 metres away (1/2 mile), and it was a very hot walk. By the time we arrived I was uncomfortably hot, and the only shelter was at the little open sided hut in the centre of the fields. Each “farm” had their own hut and these were erected on top of the dykes which surrounded the fields. 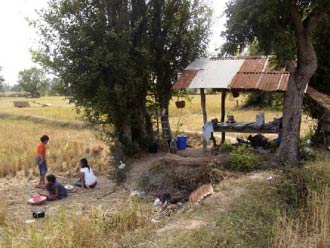 So I got underneath the shelter, and sweltered quietly with a bottle of beer. There was an old, bent lady working away close to the shelter preparing food, but I was not introduced to her, so I thought she was one of the workers. In fact I wasn’t introduced to anybody, which was quite impolite of my lady friend, but maybe that’s how they behave, I don’t know. It did make me feel a little awkward however, because when they all came in from the field they all smiled at me, but I had to ask who everybody was, apart from her brother-in-law, who I had met previously.

Just prior to them all arriving, the old lady had started a fire and was cooking food in a big blackened cooking pot. I don’t know what went into it altogether, but there was some meat, spices, soi sauce (I think) and something that looked like blood was poured in. It didn’t take long to cook, and they all sat around, got stuck in and ate from a communal dish by grabbing a lump of sticky rice and then dipping it in the main dish.

They all had a good chat about the farang, and all had some beer, which was obviously a treat for them. Meanwhile I sat like some kind of trained monkey at the little hut, under the welcome shelter of the roof. To be fair to the family, one or other of them kept opening the bottles of the beer I had bought, and kept topping me up before helping themselves. Hmmm… shouldn’t that have been the other way round? Oh well, this is Thailand. What can one expect?

After a while they all went back to work, and my lady and I were left to our own devices. So she showed me the extent of her mother’s “farm”, and pretty impressive it was. The old lady must own a piece of land about 200 metres square. All of the land is set out in fields surrounded by dykes which hold the water in the field when the rains come, and the rice is growing. The fields are about 50 metres square. Fascinating stuff right? Well it interested me. I’ve seen paddy fields in movies and TV, but never “in the flesh” so to speak. So it is quite a big area, and there were 6 people working at harvesting the rice. My friend’s sister and her husband, and two other couples who were employees. Strange to see husbands and wives work together. I don’t know if this was just a peculiarity of that farm or if that is how it is done in Thailand as a whole.

At about 3.30 p.m. all the kids came out of school, and the kids belonging to the people working in the fields all came out there to be with their parents. When they saw me, the trained monkey, they all came to have a look. Not too close because they hadn’t seen a farang before.

My lady friend had already told me that I was the first farang to visit the village, and she seemed proud that she had achieved this distinction. I just hoped she hadn’t told them that I was going to marry her, which would cause her problems of “face” when it didn’t happen. I had already explained to her that it wasn’t on my immediate agenda, and I would have to know her for a long time to even think about it. So I shouldn’t feel any guilt, but I did feel a bit uneasy about exactly what she had told the family.

Anyway the kids came to have a good “butchers” (cockney rhyming slang ­ butchers hook/look). Most of them were a little bit nervous ­ well wouldn’t you be? – “It is a trained monkey, but it’s so damned big”. Apart from one little girl whose name was Piew (pronounced Pee You, but with the two words run together). That little girl had the widest and wildest smile I have ever seen. I was smitten by her immediately, and she was the only one not nervous of the big monkey. All the kids were so sweet, but she was really different. 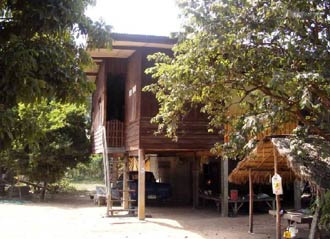 I took pictures of them all, and as my camera is digital, showed them their photos, which gave them a thrill. One of them said she was on TV!!! Well it does look like a little TV screen. I was loving it. Better than the boredom of waiting for something to happen, under the little hut.

After a while the kids scattered to see their parents who worked for about another hour and then finished cutting the rice for the day. They all gathered at the little hut, and took off all their head wrappings, Wellington boots, and trousers, and stripped down to their normal clothes underneath all the layers. I don’t know how they could survive the heat in all those clothes. And why do they wear Wellington boots when there is no water in the fields?

So we all slowly made our way back to the house (the brother-in-law’s house was right next door), and the workers took their showers, and came back out for a chat with the family until it got dark.

Well this episode has become rather long winded (I try not to type more than 2 pages in Microsoft Word for any one story) so I’ll save the rest for a later edition. Watch this space ­ if you are interested.

Next Time You’re On The Skytrain

Songs Of The Dead