Men like women and men like Patpong. But seeing all of a woman up too close isn't always endearing. The sight of a woman in a gynecological chair with her ankles in stirrups and her legs as far apart as is physically possible leaving her without a shred of dignity is a sight few men wish to see. And so it was last night at Patpong where the main soi was visible to all, with no night market because of the curfew. The bars were open for business in Bangkok's oldest bar area. Bars were open as were some shops and most of the restaurants. But Patpong soi 1 without the night market didn't look the same, didn't feel the same. The night market takes up most of the main Patpong soi and conceals much of what goes on from view. Without it, Patpong soi 1 was wide open for all to see, its soul bared – and it wasn't pretty. 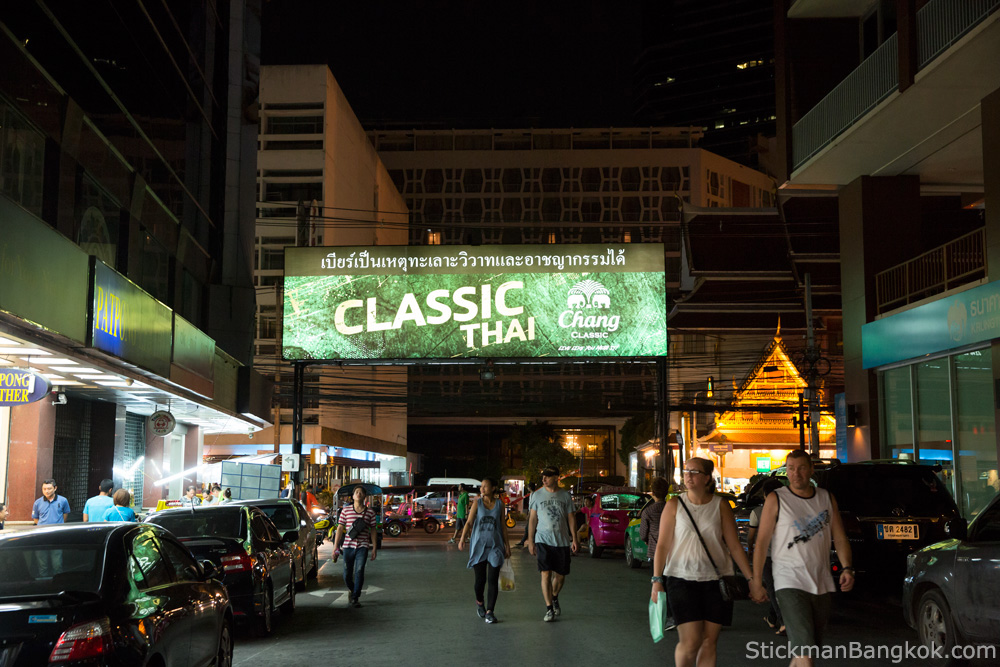 At the Suriwong Road end of Patpong.

Bangkok bar and nightspot owners are growing in confidence and flouting the curfew. In Patpong it's business as usual with bars open hours beyond the 10 PM curfew.

But the message has not got through to bar customers and Patpong is quiet, deathly quiet, probably a mix of few tourists in town and most probably assuming nightlife attractions are closed. 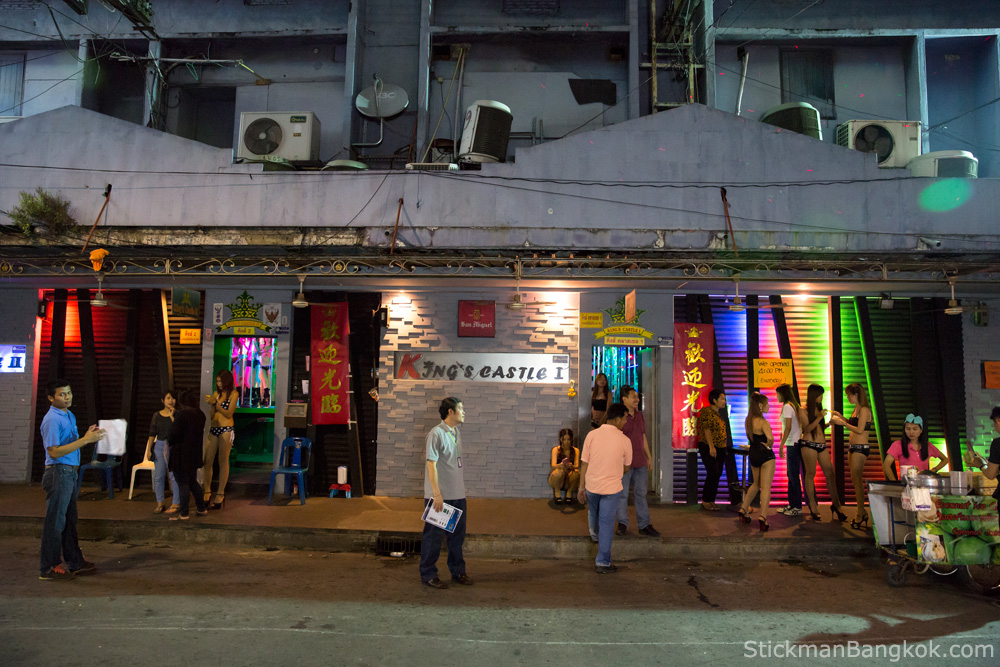 But there were few punters about.

There were more touts on Patpong soi 1 than customers and the touts were clearly frustrated they would not be making much money (some – especially those who work for upstairs bars – are on a commission). I faced real aggression from some touts for taking photos of the bar, something which very seldom happens. The crowds were absent, the vibe was off and there is aggression in the air. One tout animatedly pointed at the camera and made the throat-slitting gesture. Charming. 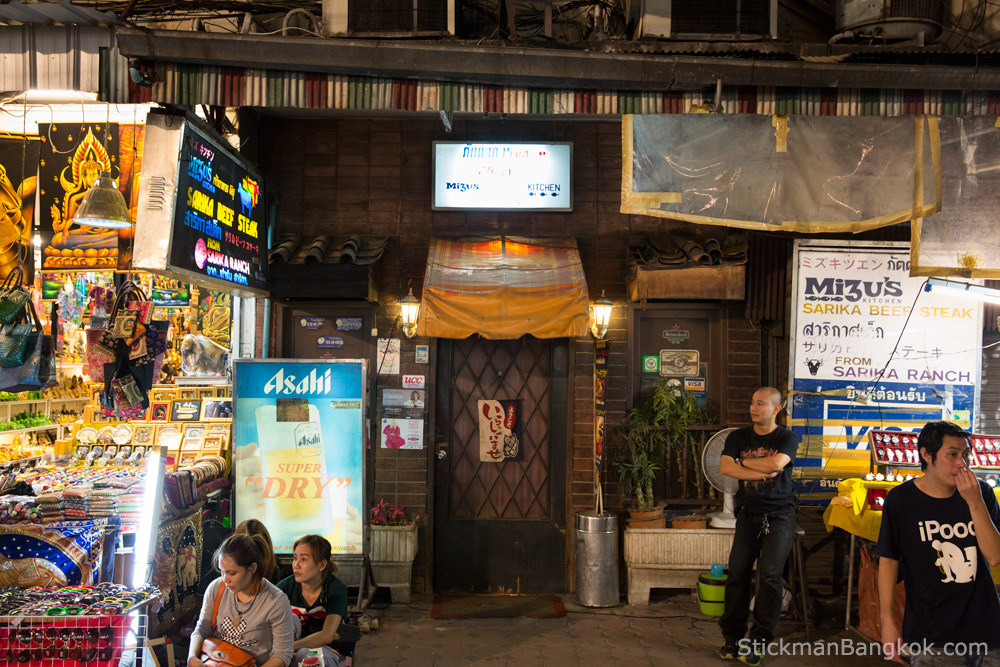 Mizu's Kitchen, near the Suriwong Road end of Patpong soi 1.

Restaurants in Patpong and the general area are open although unlike restaurants in the Sukhumvit area they aren't doing well as visitors stay away.

Some Sukhumvit Road eateries are busy earlier as folks rush out to get a meal before they close for the curfew. To my eyes some eateries are actually busier than usual, at least early in the evening.

In the Silom / Patpong area it seemed rather different and many businesses had few customers. The restaurant at Foodland in Patpong had not a single customer and even the street-side food vendors near the Suriwong end of Patpong soi 2 were dead. 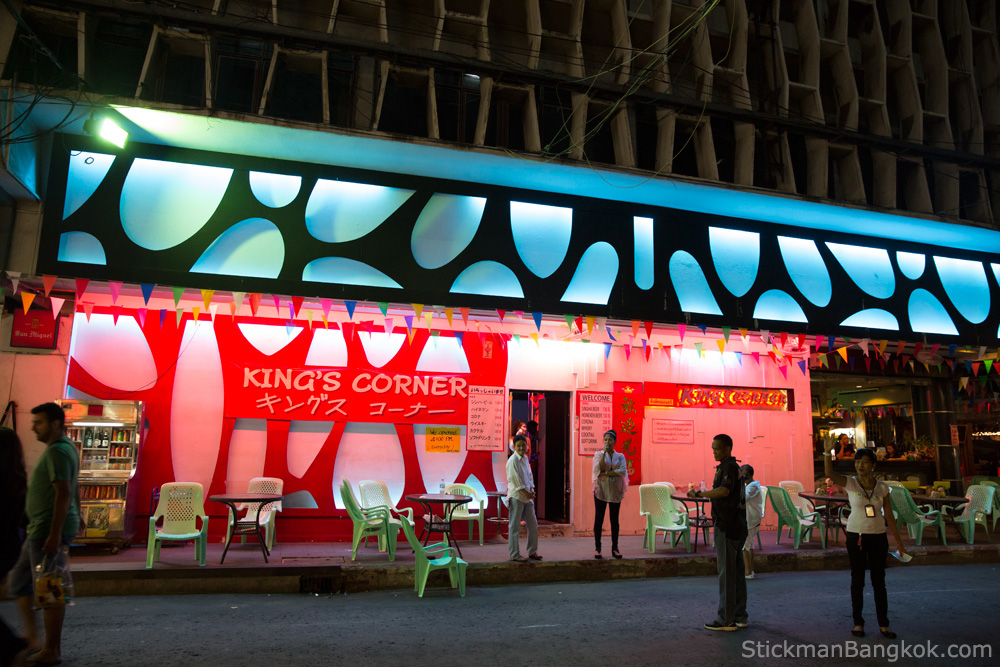 Customer numbers are not even half what they usually are – and that is saying something for Patpong soi 1 hasn't seen decent customer numbers for years. 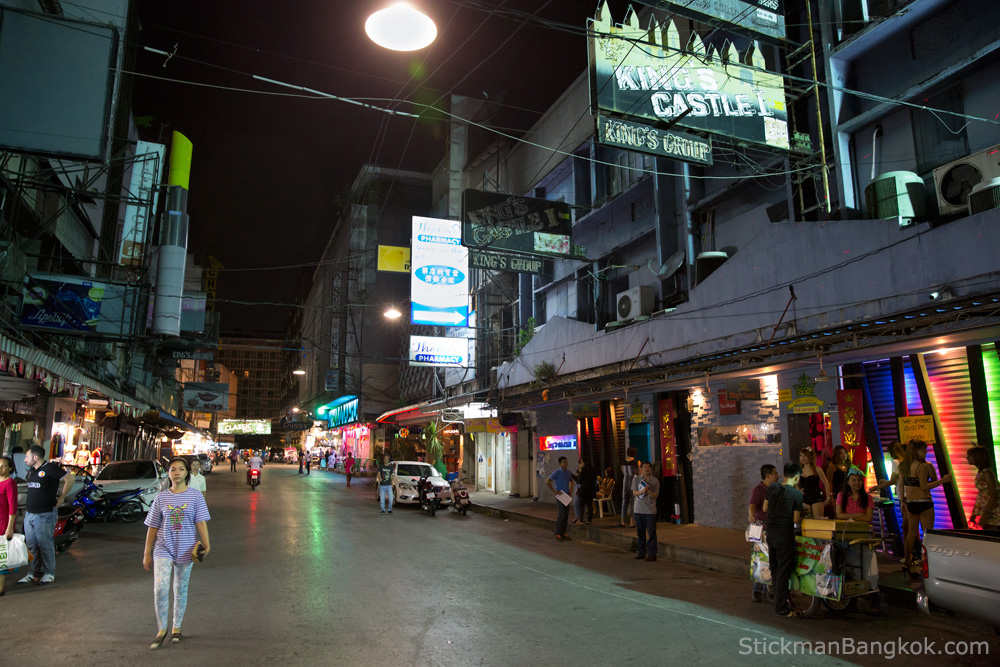 It's not until they get close to you that you realise that many of those lingering on Patpong soi 1 are Thai males. They carry a laminated menu outlining the filthy tricks and shows taking place upstairs. So desperate are they to earn a commission that they are not easily shaken off. 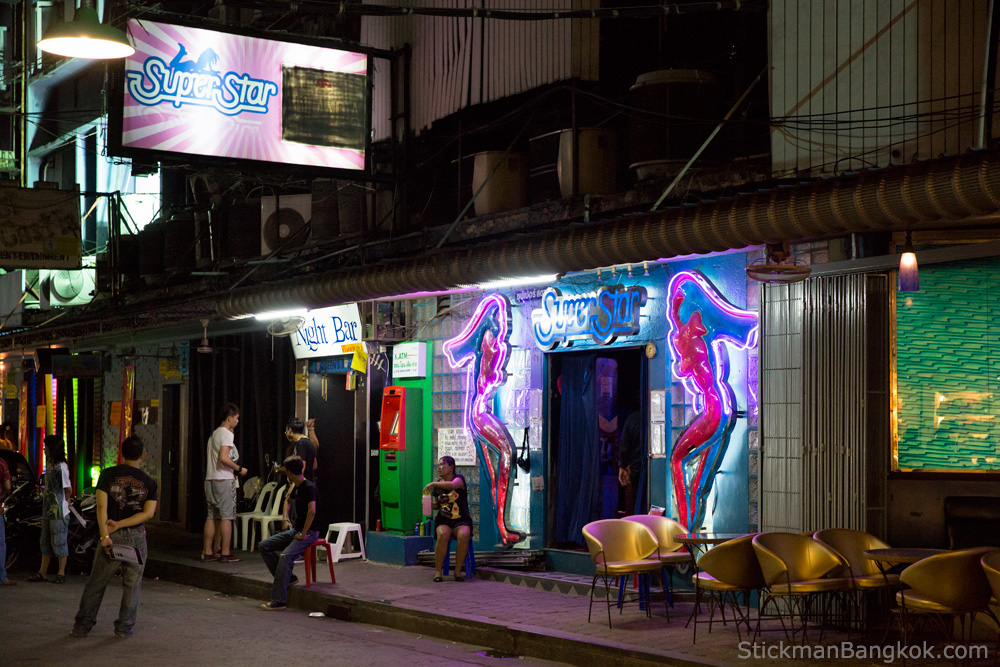 Superstar is the only bar on soi 1 which has opened every night through the curfew.

Different bar areas fall under different jurisdictions and when one bar area is open, across town another area might be in darkness. The lights were on last night in Patpong but partygoers were absent. 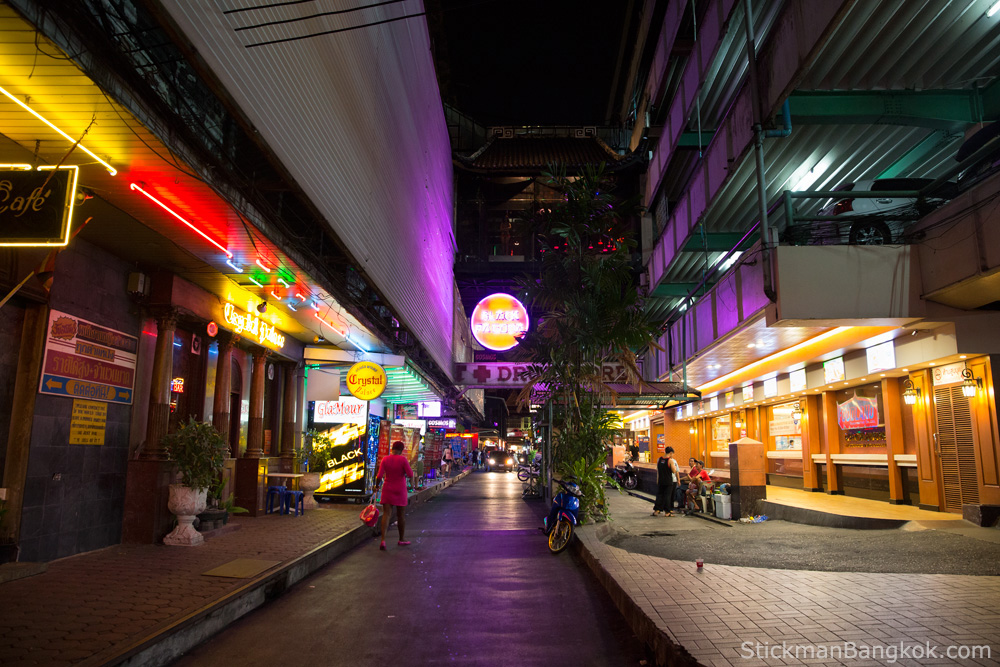 Patpong soi 2 is largely free of vendors and a casual glance makes it seem that it's business as usual. It too is quieter than usual but Bar Bar, Black Pagoda, Club Electric Blue, Bada Bing and The Strip are all open.

Of the bars that are open – which is most – the girls seem friendlier than usual. The cynic in me says that they are more desperate – good news for those who do venture out. 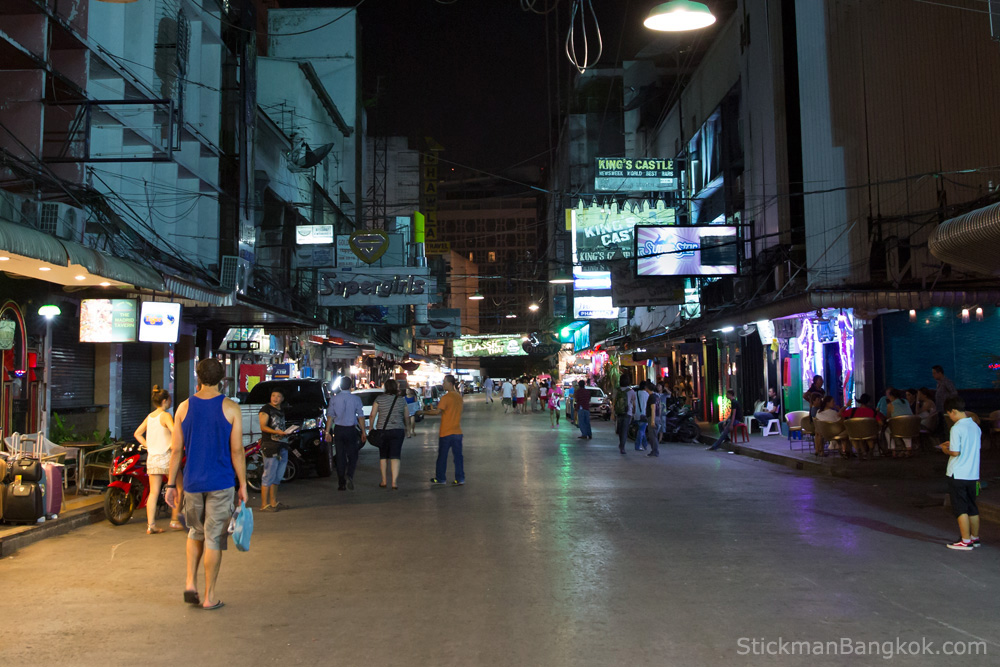 
Across town at Nana Plaza, the Nana Group bars (Angelwitch 1 & 2, Billboard, Lollipop and a bunch more) are open each night until 11 PM, as are many other bars in the area.

One reason for not opening later is the trouble girls are having getting home. Girls who finish work after midnight would usually take a taxi home but with a curfew in place getting home is proving difficult as taxi drivers try to maximise their earnings. Some taxi drivers have been demanding 1,000 baht to take working girls from Nana down Sukhumvit Road to Prakanong and Onut – where many live – for what should be a fare of less than 100 baht. This is something which needs to be considered if you're out late at night. You might have to budget a whole lot more for a cab ride than usual, and complaining may well fall on deaf ears if it is during curfew hours because you should not be outside in the first place!

So, yes, there are still nightlife options in Bangkok for as many bars flout the curfew order and open the doors. I do wonder about the wisdom of that…but what would I know? Opening after the hours of the curfew and encouraging customers to come out is, at this time, illegal.

Coup d’état in Bangkok, How The Coup And The Curfew Have (Not) Affected Me