It's hard to know quite what to make of the Bangkok Shutdown so far. A massive statement was made on Monday when huge numbers joined the protest but from the next day the numbers fell off. With what I have seen with my own eyes, at the Asoke intersection at least, the numbers dropped off even more today. 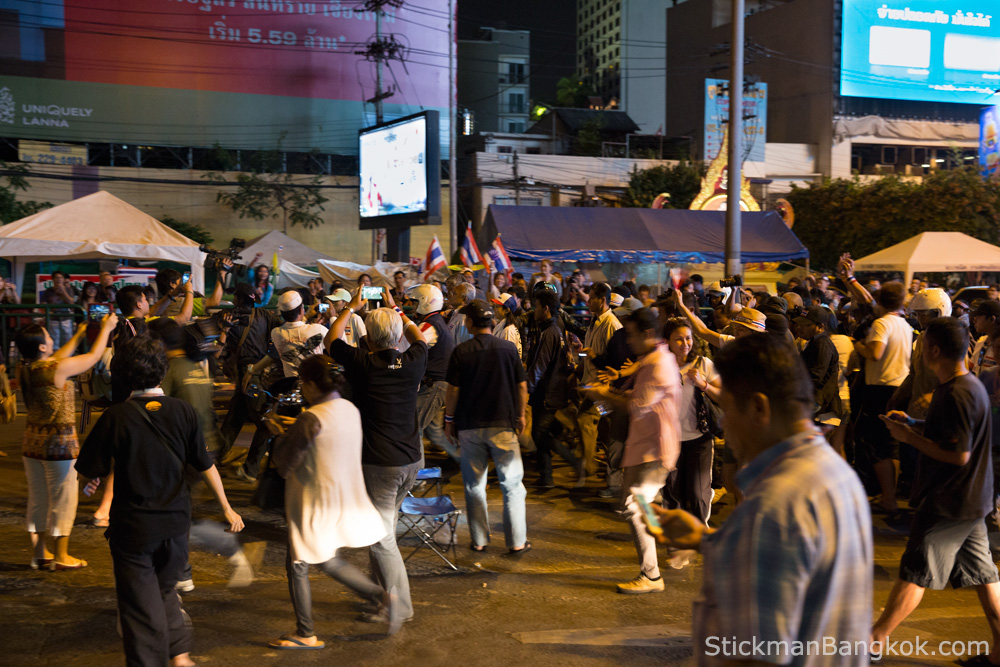 Last night, Suthep, the leader of the movement, strode south of the Asoke intersection towards Exchange Tower. He was flanked by his bodyguards who from appearances are a real ragamuffin-looking bunch. Tatty jeans, motorbike crash helmets and some belching out what I can only describe as macho noises like Tarzan pounding his chest while followers tried to keep up, young fathers bouncing a child on their shoulders and screaming out soo, soo <Fight, fight!>. It was a bizarre scene! 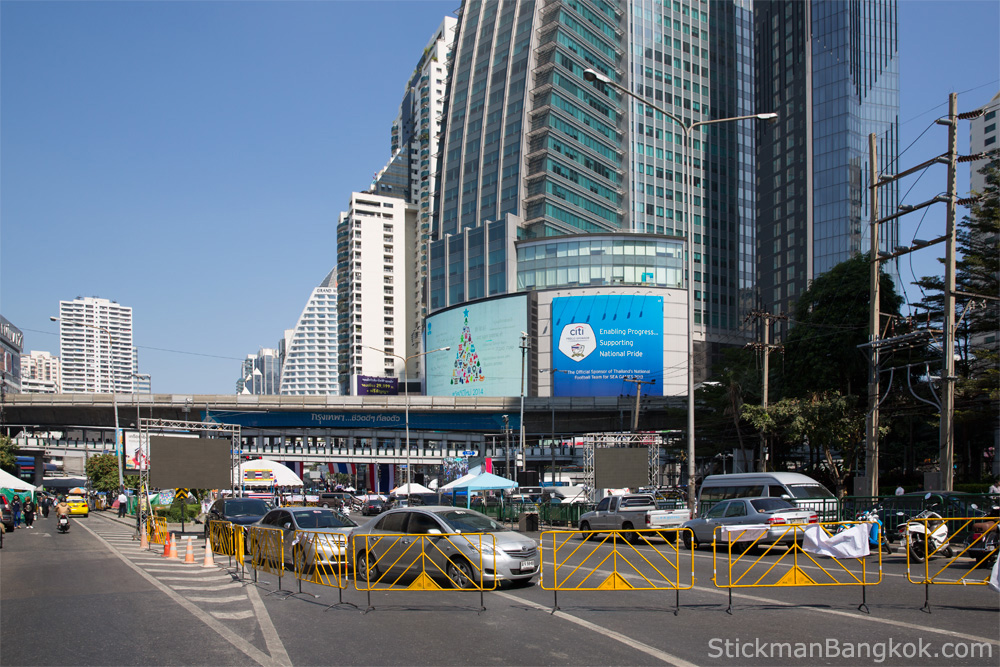 Just a couple of hundred metres south of the Asoke intersection this morning, looking north. Protesters had set up a basic roadblock and were channeling traffic to the intersection left on to Sukhumvit Road. It was not possible to go straight ahead or turn right. Making a u-turn was possible. 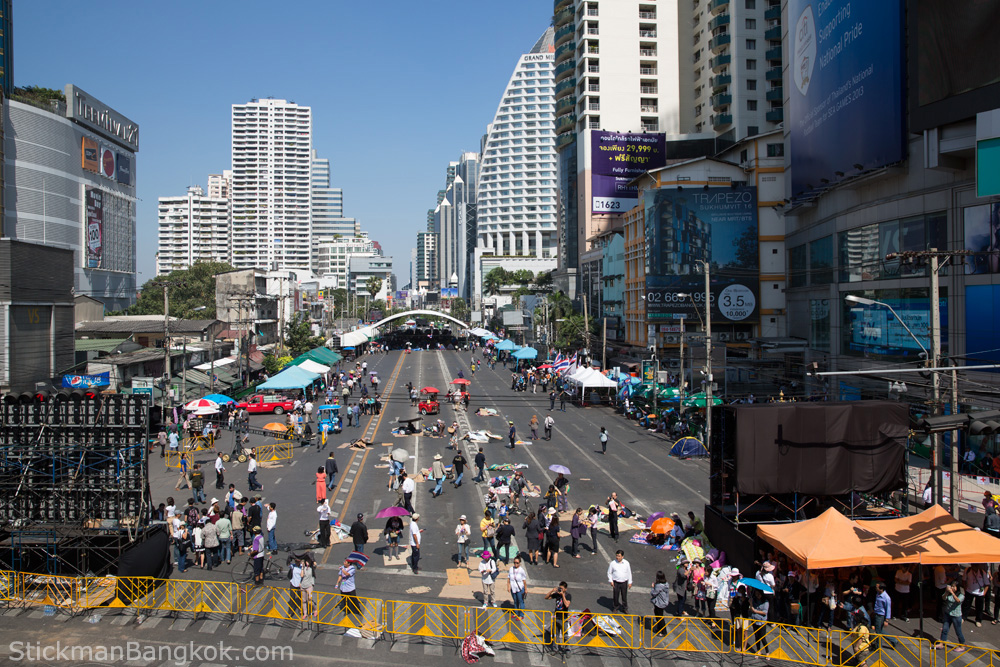 Dwindling numbers at Asoke was the first thing I noticed this morning. On Monday morning this area was jam-packed, but this morning's photo hardly shows impressive numbers, does it? With that said, Suthep took many followers from this intersection on a walk east towards Ekamai so that might may well account for the lack of protester numbers at the site. Further, the Asoke site seems to be popular with the office crowd and numbers swell after office hours. 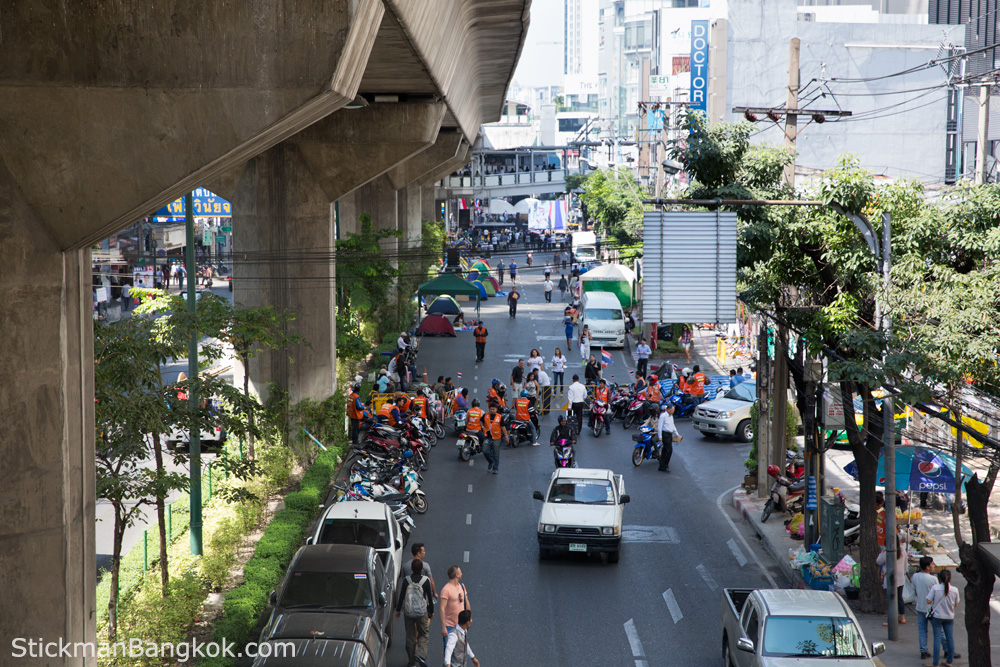 This is Sukhumvit Road looking west towards the Asoke intersection, the photo taken from the overhead pedestrian walkway between sois 23 and 25. 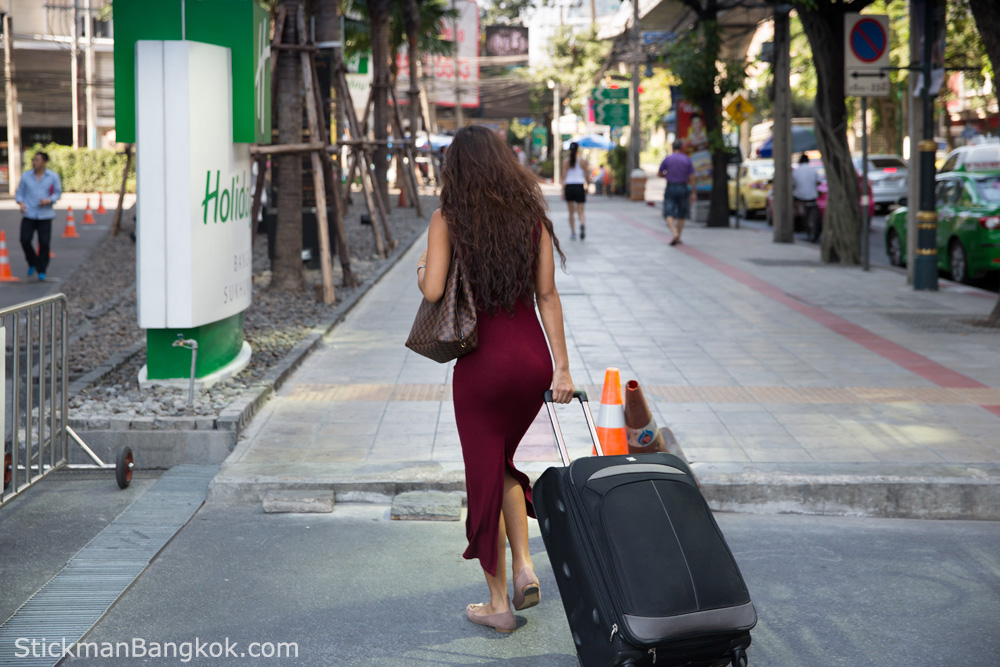 Travellers hauling their luggage on their way to or from accommodation is not an uncommon sight. I didn't spend that long out today but I saw several people just like this. She looked even better from the front! 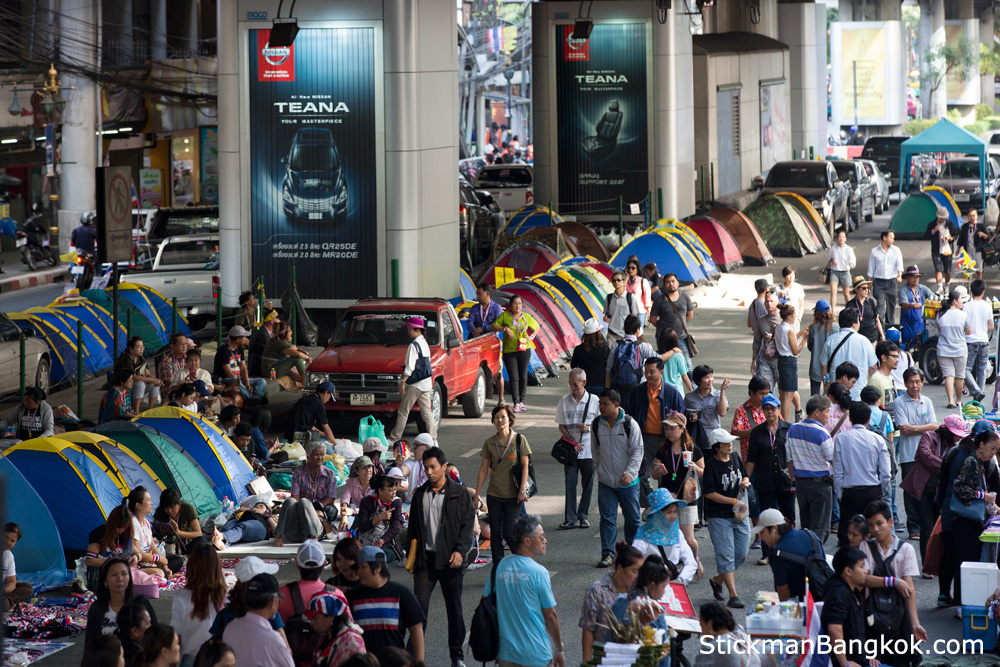 Under the Asoke BTS station this afternoon there were perhaps a few hundred protesters and a good few protest site tourists! Many people seemed to be milling around without any focus. The usual rhetoric was coming from the stage but most protesters seemed to be doing their own thing. 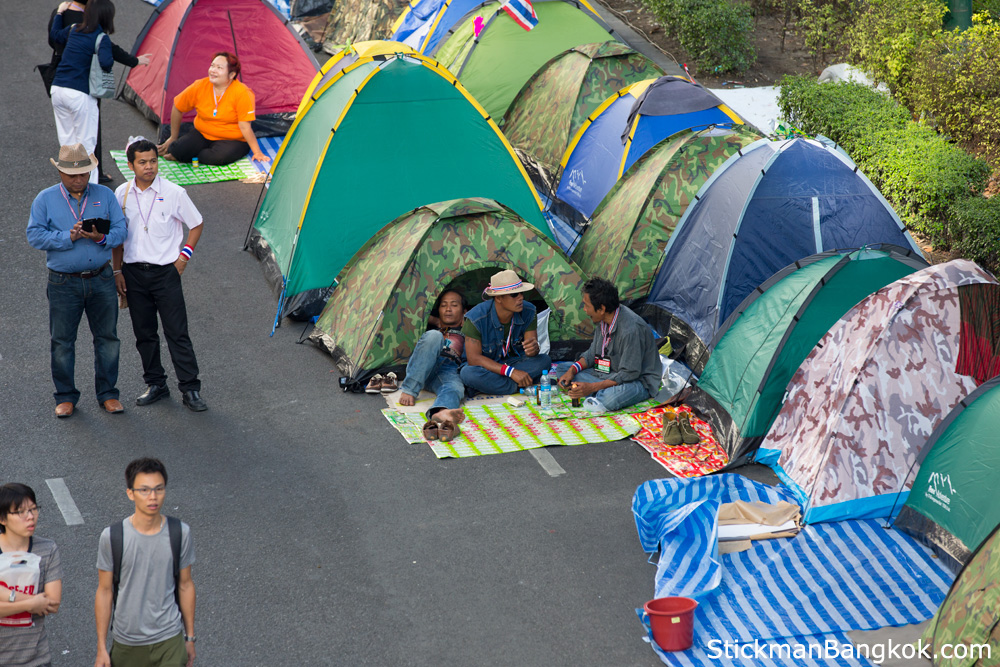 Those who are sleeping at Asoke for the most part seem to be under the large marquee tent on Rachadapisek Road, up from Soi Cowboy. A few dozen small tents are set up on the main Sukhumvit Road, between the Asoke intersection on soi 23. 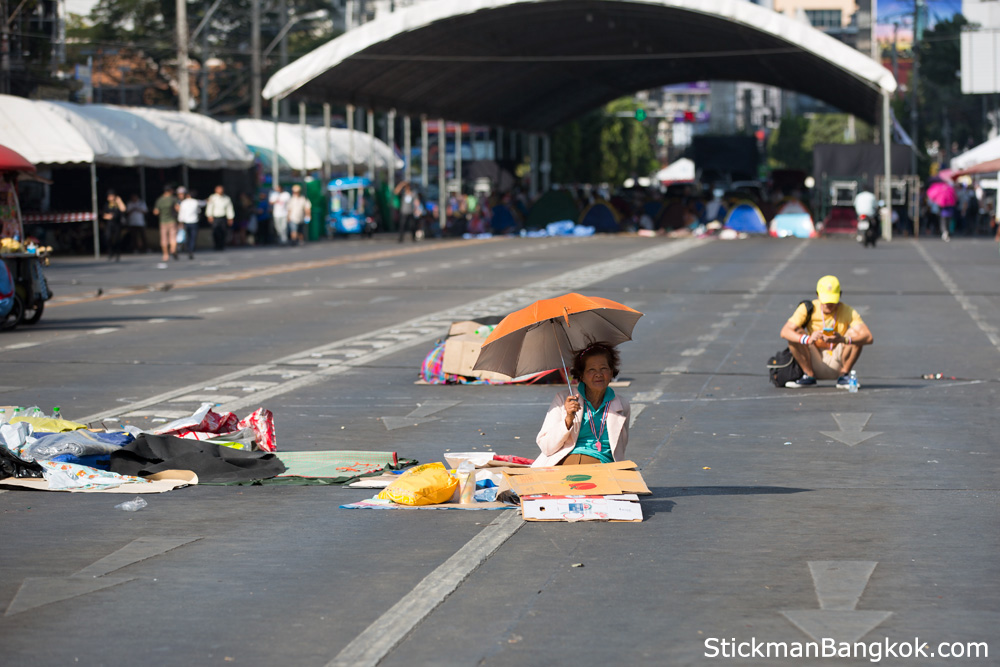 Grandma cuts a lonely figure, sitting out in front of the stage at Asoke all on her lonesome. Full marks for dedication, but surely someone could sit with her and keep her company? 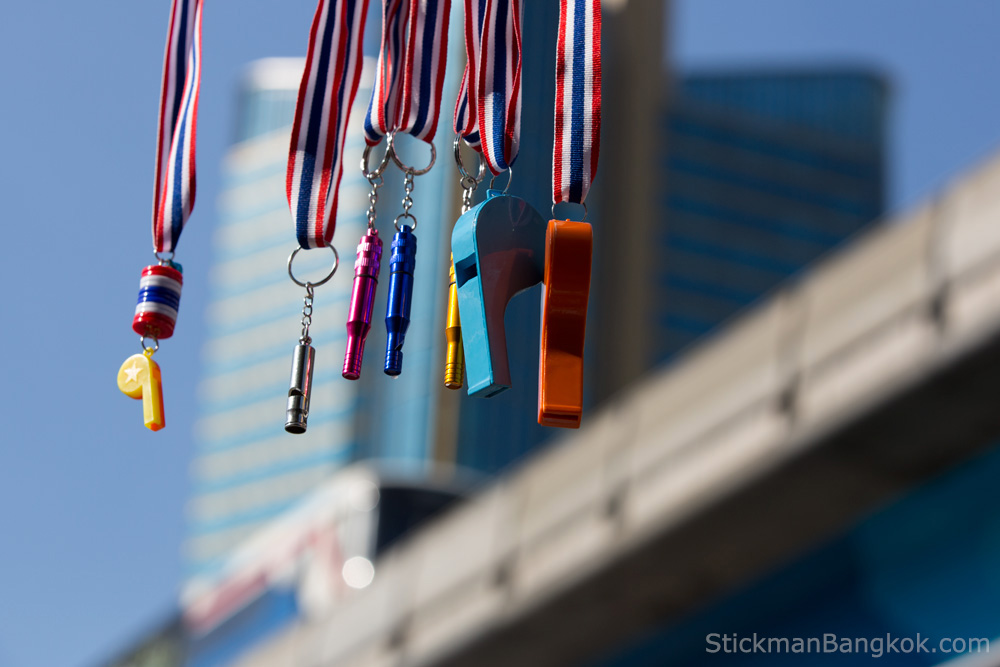 You can never rule out danger in these situations but for the time being it seems that the biggest hazard at the Asoke protest site is the deafening sound of whistles being blown at the same time.

On Monday I wrote that now doesn't seem like a good time to visit Bangkok. But today, just 2 days later, things seem to have eased off a bit. Fewer protesters, less congestion, cars being allowed to pass through some occupied intersections and no sign of mass business closures, be it bars, restaurants, shops or tourist attractions. One could reasonably ask why shouldn't one visit at this time?! Today almost felt like a normal day in downtown Bangkok. A quiet day, but – if there is ever such a thing in Bangkok – a normal day.

I don't want to appear fickle and flip flop back and forth. This is simply a case of a changing situation in Bangkok. You would have to say that, as at the time of publishing, there is an argument to visit Bangkok at this time. Things feel, like I say, almost normal at the moment. I bet there are many in Bangkok (mainly those well away from downtown and who have no reason to go downtown) who haven't noticed any disruption at all.

The real issue, of course, is that anything could happen and the effects of that could range from mild inconvenience to genuine danger.

The Bangkok Shutdown, It’s Getting Bigger!