And there I was thinking that Asoke was quiet today. Well, it was quiet by day, but come nightfall everything changed again at Asoke went totally nuts.

The movement's leader, Kamnan Suthep, had led a few thousand followers on a long walk down Sukhumvit Road to Thonglor, Ekamai from where they did a loop and returned to Asoke, the 10 km journey taking them approximately 10 hours. When they returned Suthep was met to a rapturous welcome by his adoring followers in emotional scenes where most of the crowd was cheering and screaming, some so overcome with emotion they were reduced to tears. 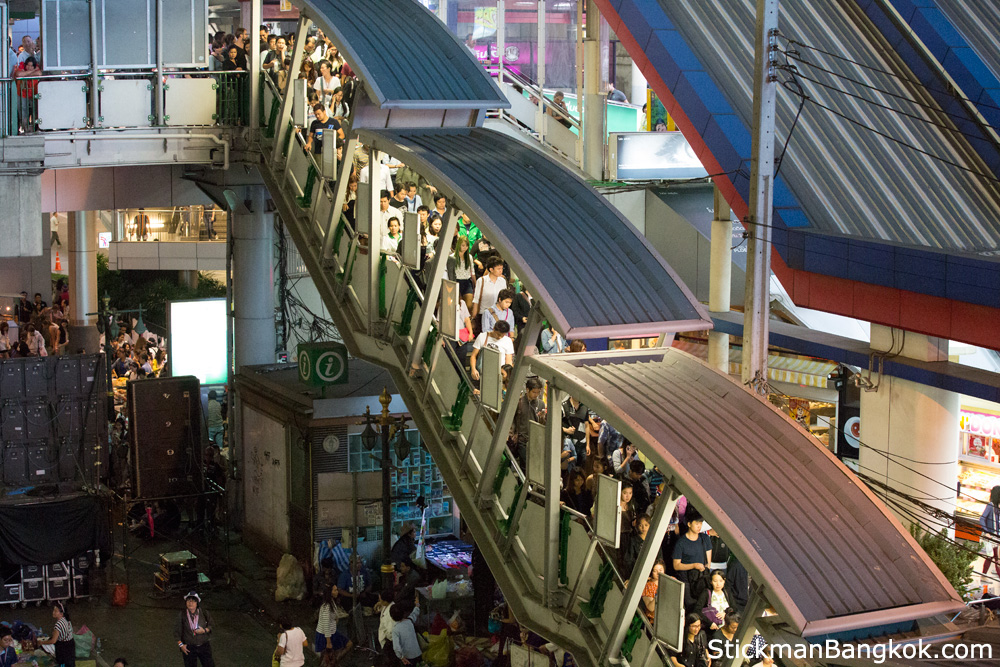 Asoke was mobbed and there were streams of people getting off the skytrain and going down to ground level. While some traffic was allowed through the intersection during daylight, after nightfall no traffic could pass. 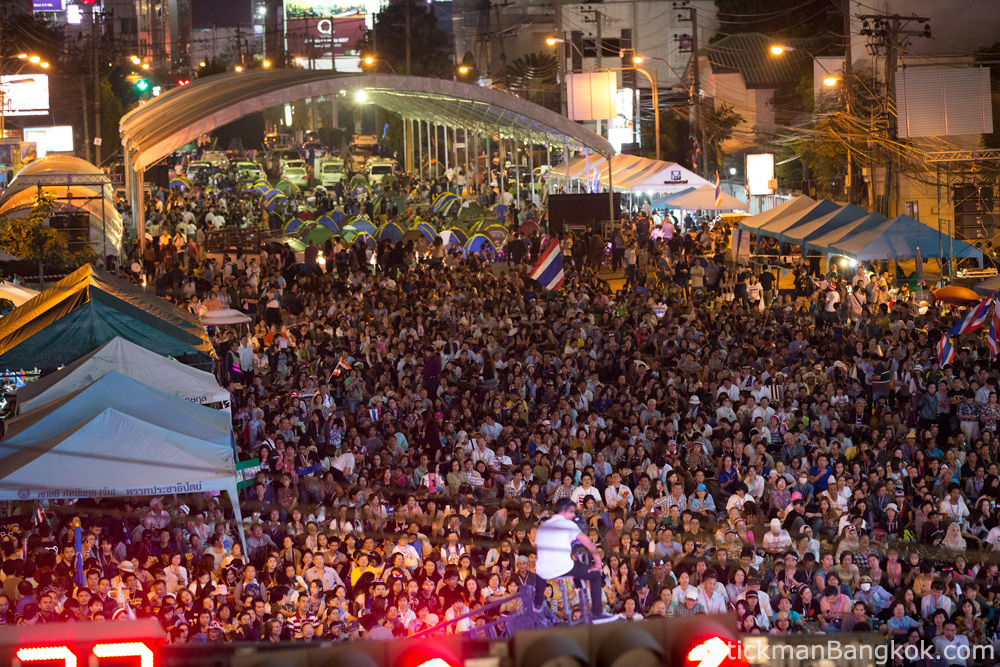 From the Asoke overhead walkway, where earlier in the day the Asoke intersection had been quiet, tonight there was a sea of people with similar numbers to Monday. This shot was taken with a telephoto lens and shows only part of the crowd. There were thousands more people out of shot, closer to the stage. It was mayhem – and this is, at best, the forth busiest stage. How busy were the other stages?! 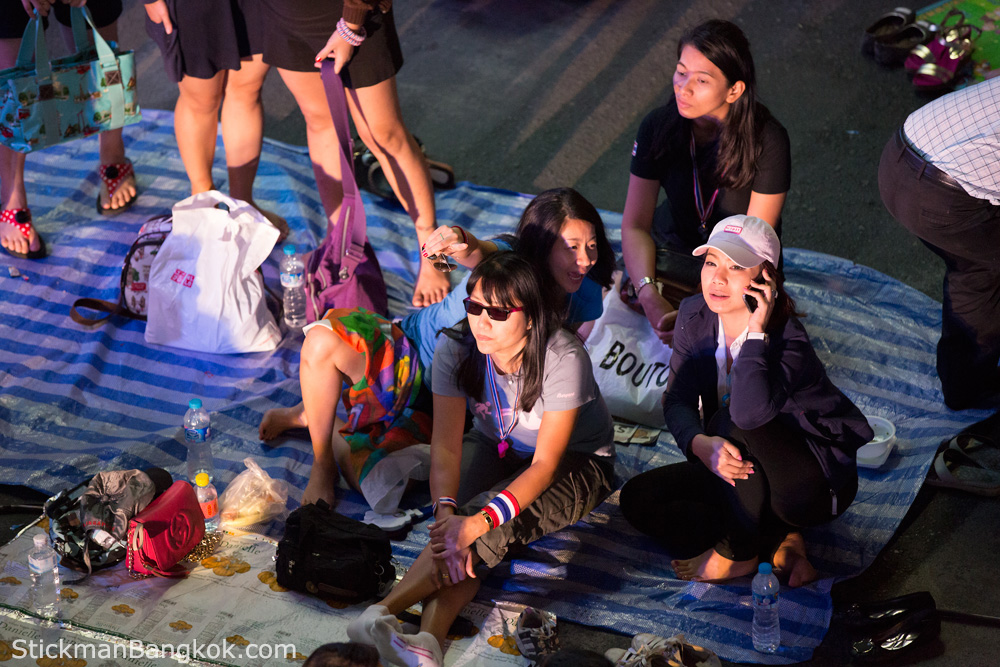 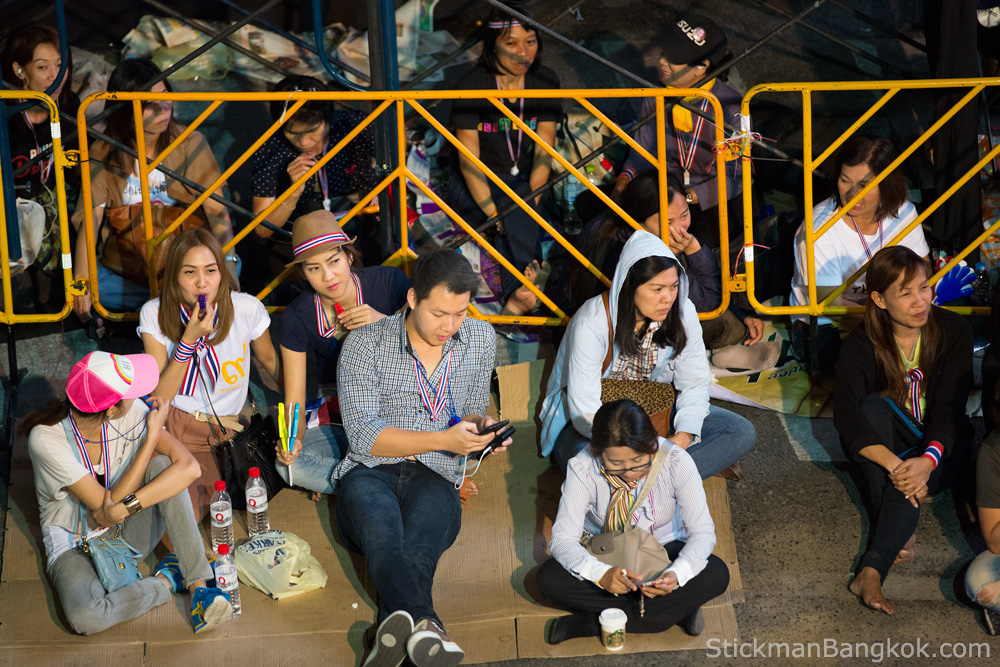 Asoke is very much an office crowd with middle class types attending once their work day has finished. 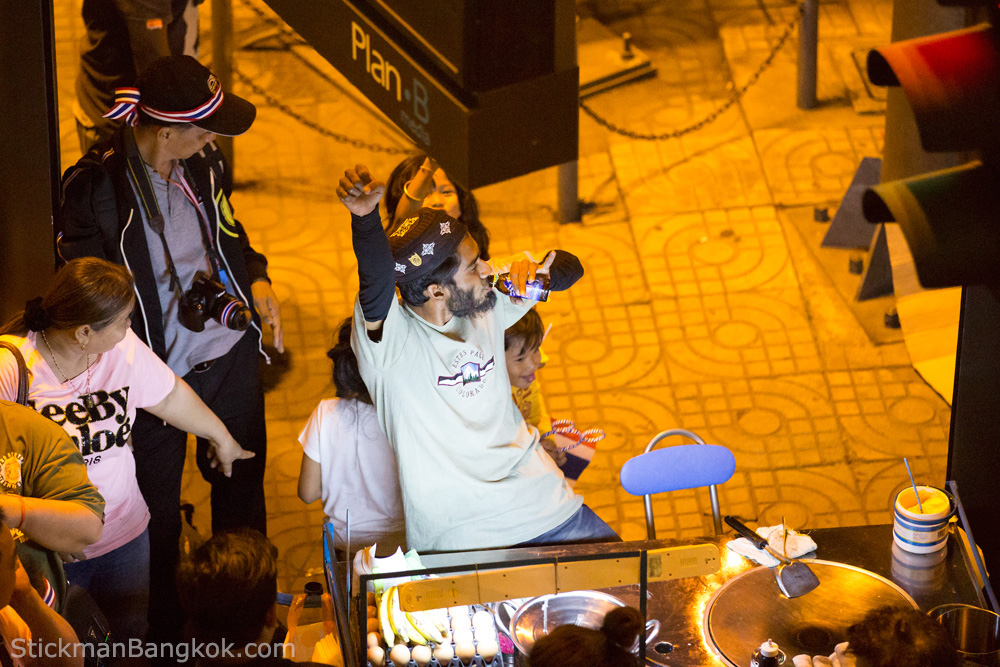 People were joyous, some were dancing, all in great anticipation that their leader was about to arrive. 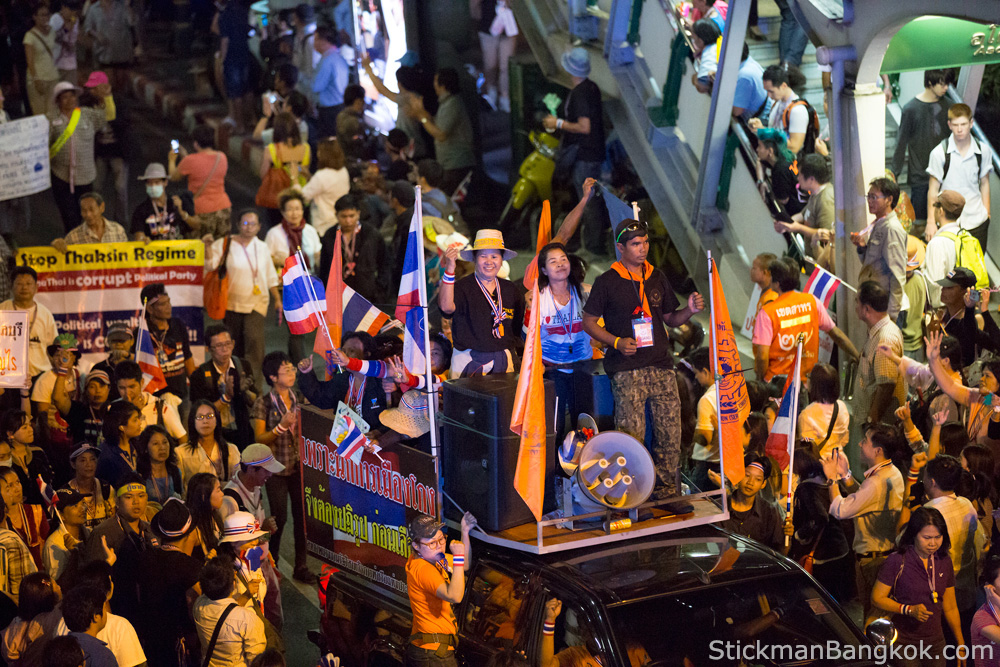 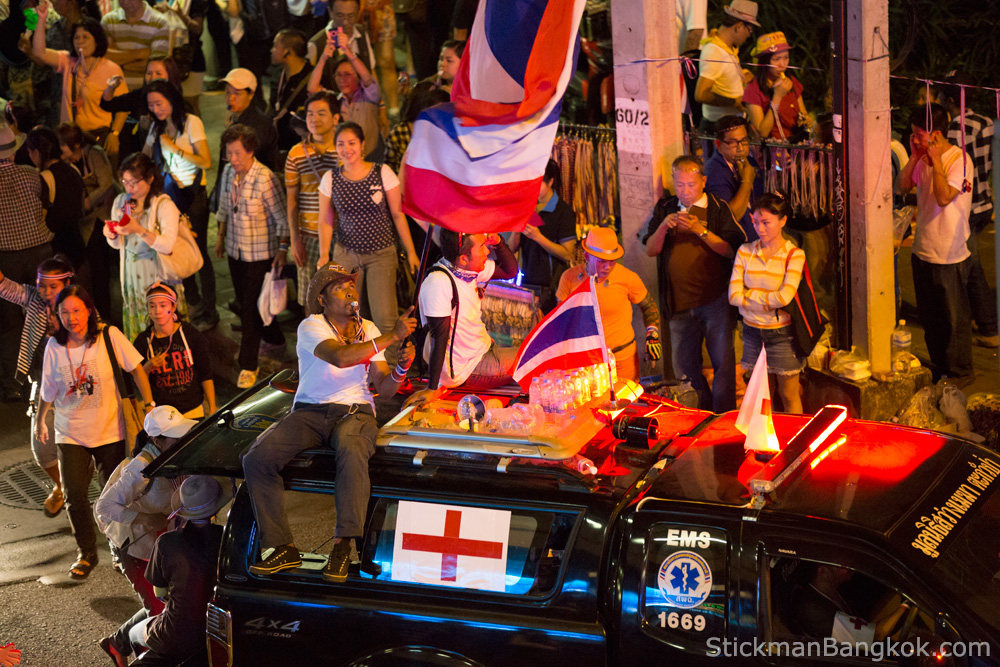 A stream of people, trucks and other vehicles approached from the east. 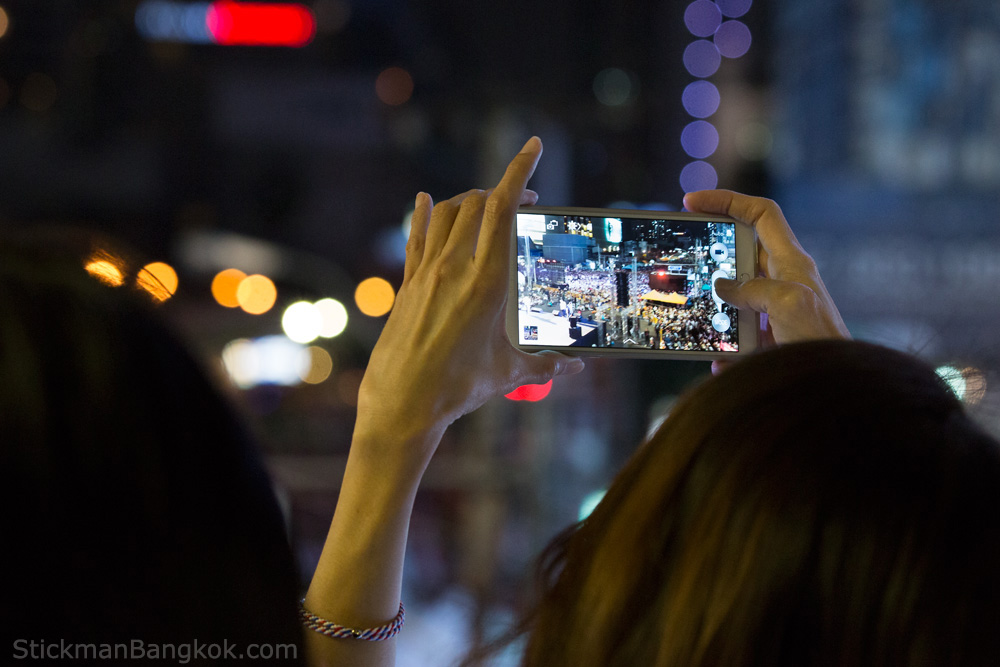 Vantage points were hard to come by and even taller foreigners could find themselves so far back they could not look out over the crowds. 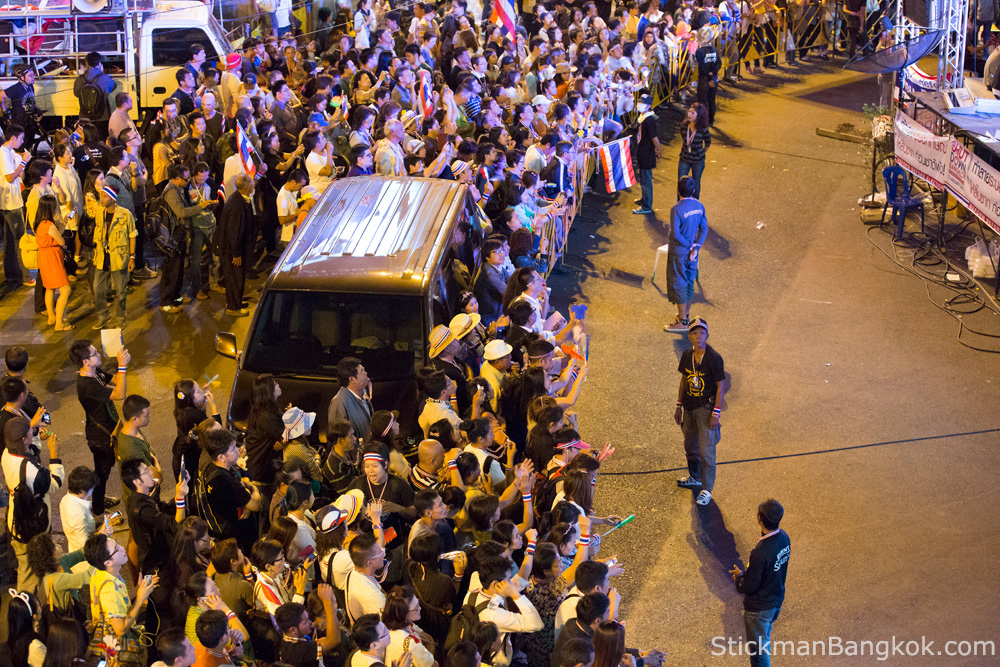 Suthep is coming and behind the barriers the crowds are fixed on the many large screens strewn around the area. 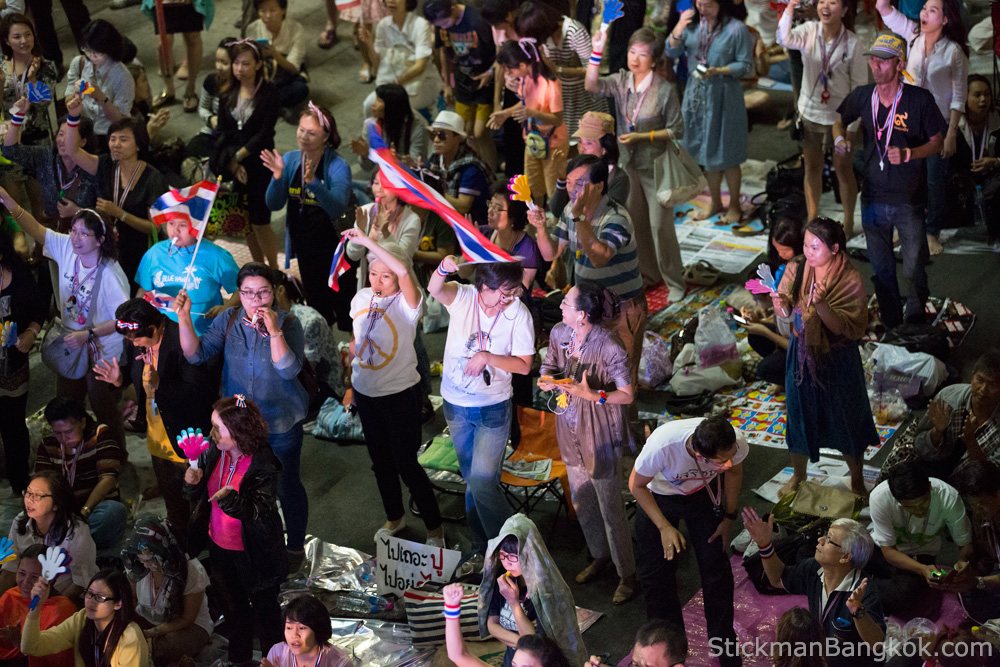 As he gets closer the crowds get to their feet. It's pandemonium as all around me whistles are being blown, people are screaming and some have tears streaming down their face. It's surreal, an emotional fervour I have never seen at a political event. 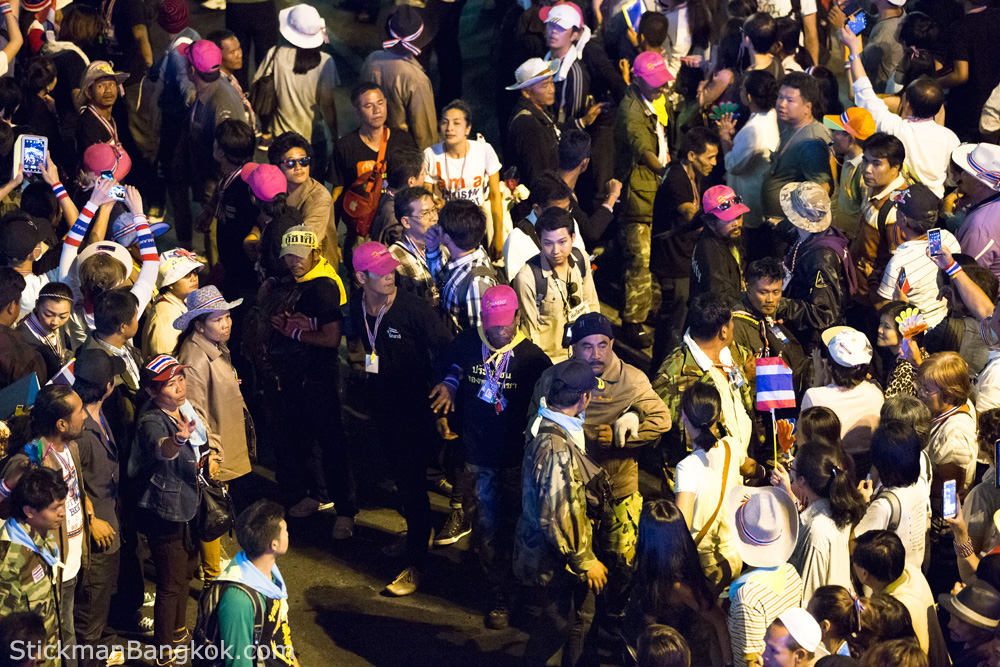 The guards, three chains deep on either side form a path for Suthep to make his way through towards the stage. 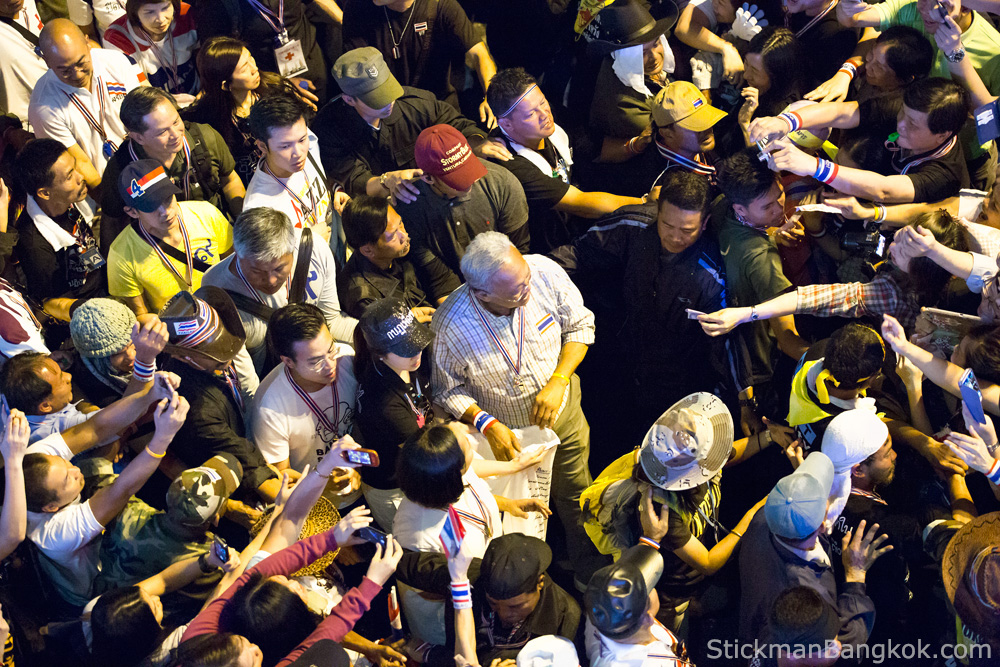 As Suthep reaches the Asoke intersection the noise is deafening, a cacophony so loud and so sustained that you cannot help but be caught up in the emotion of it. There is a crush as his followers thrust towards him. 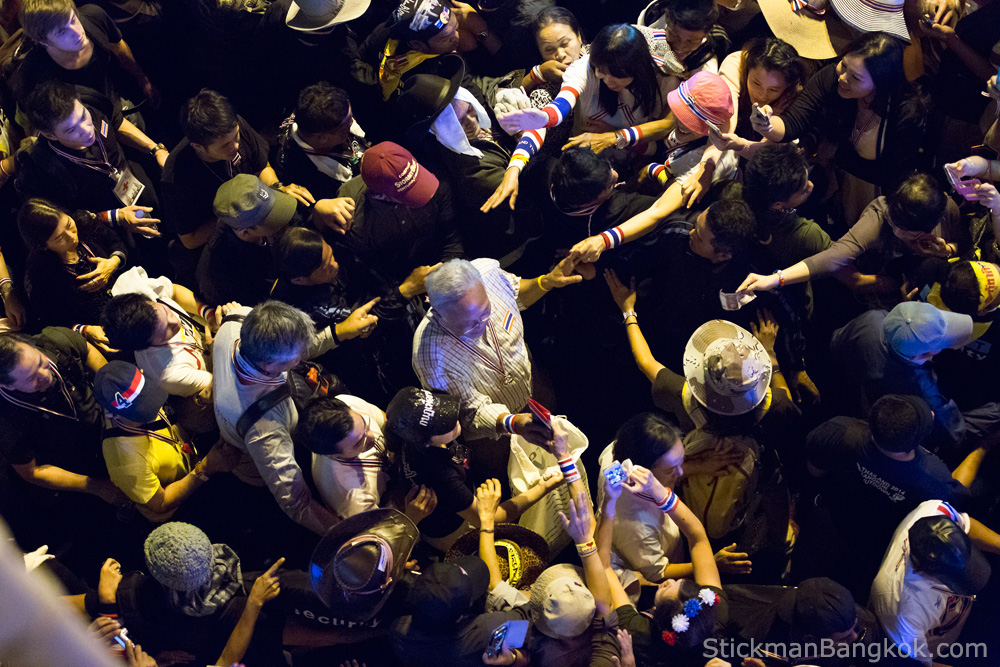 As Suthep strode through surrounded by a three layer ring of security. Supports tried to grab his hand and many passed donations, often wads of banknotes. It was an absolute frenzy and words fail me to describe the hysterics in the crowd. 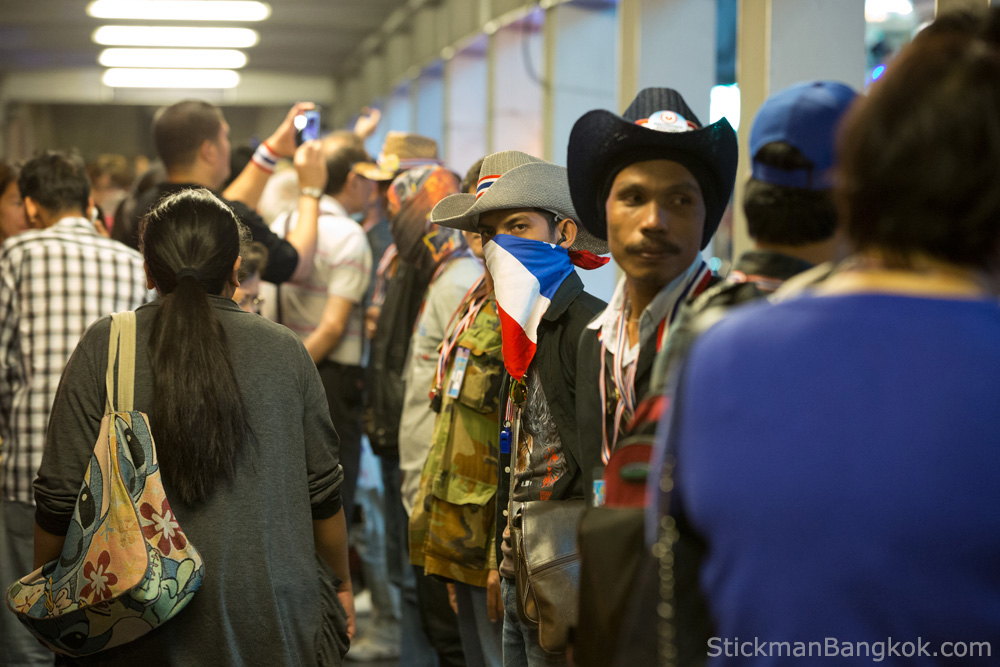 The guards form a chain up on the walkway to prevent anyone from getting close to the stage while Suthep is speaking. Apparently the concern is someone could throw something down below. With Suthep the energy driving the movement, he is now a closely
guarded man. 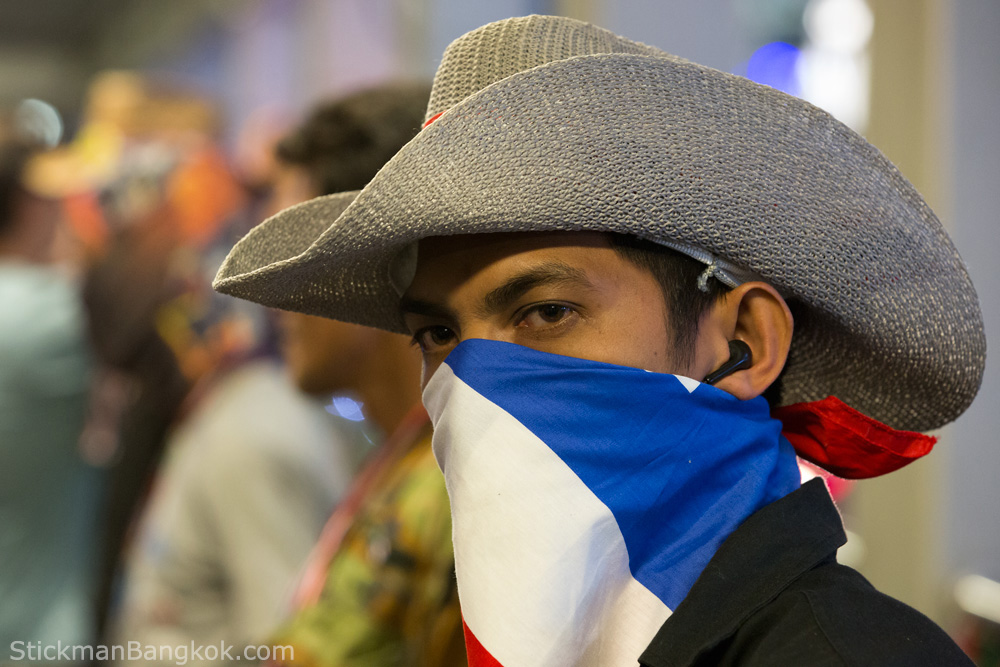 I can usually get a smile out of Thais, but this lot really looked like they meant business. No small talk on my part! 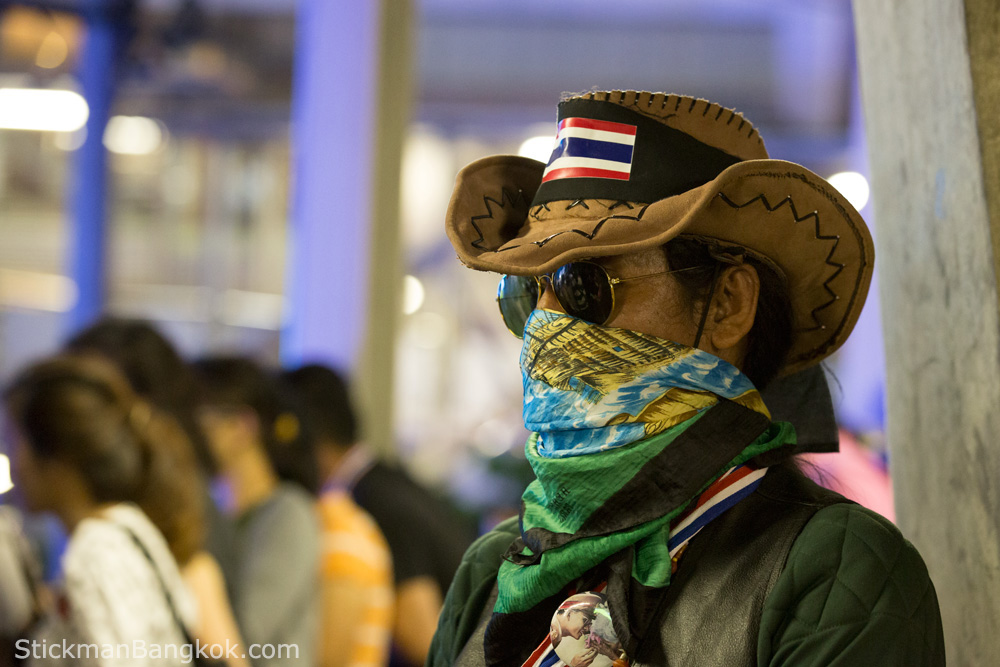 This guy was probably the scariest of the lot. Mouth and eyes covered. 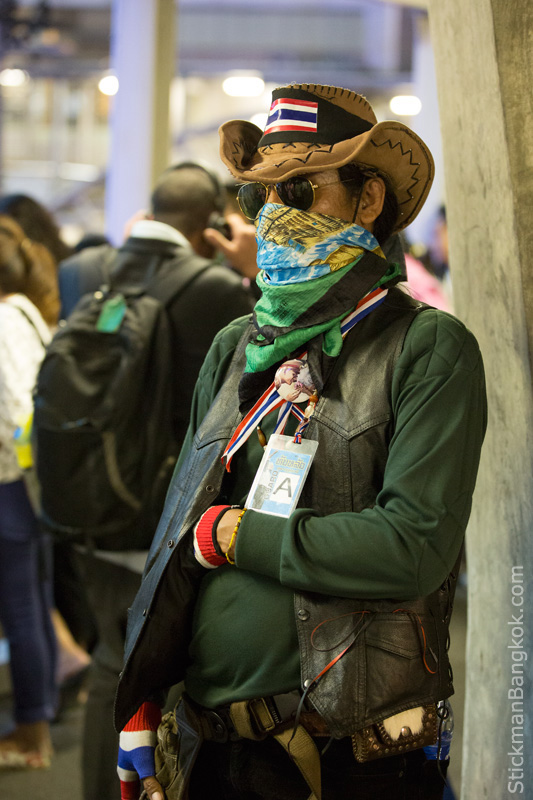 Umm, what has he got inside his jacket?! 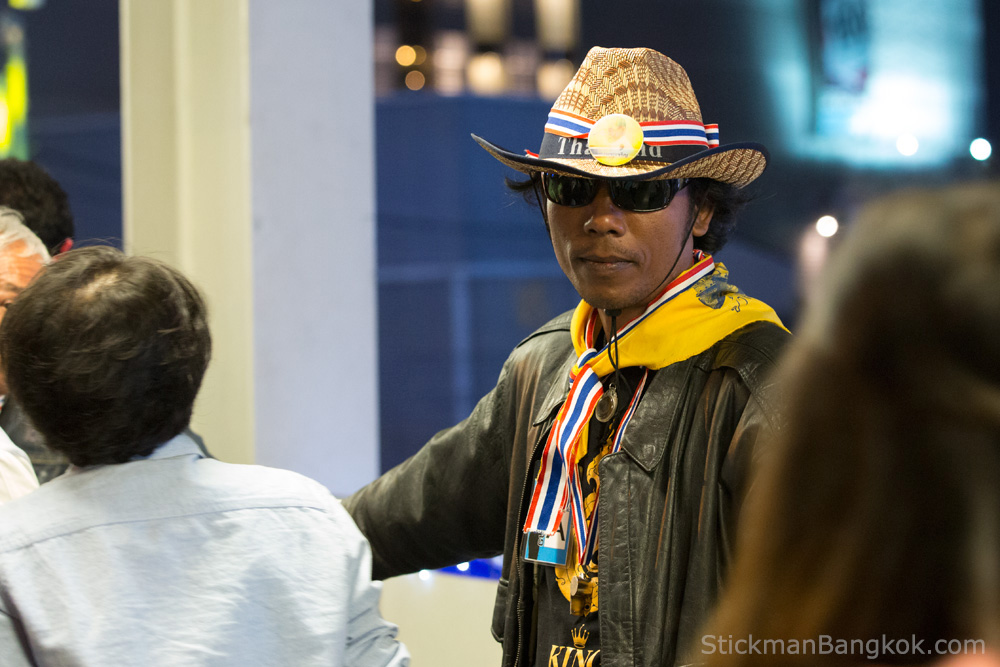 And this guy didn't look like the friendliest fellow either. 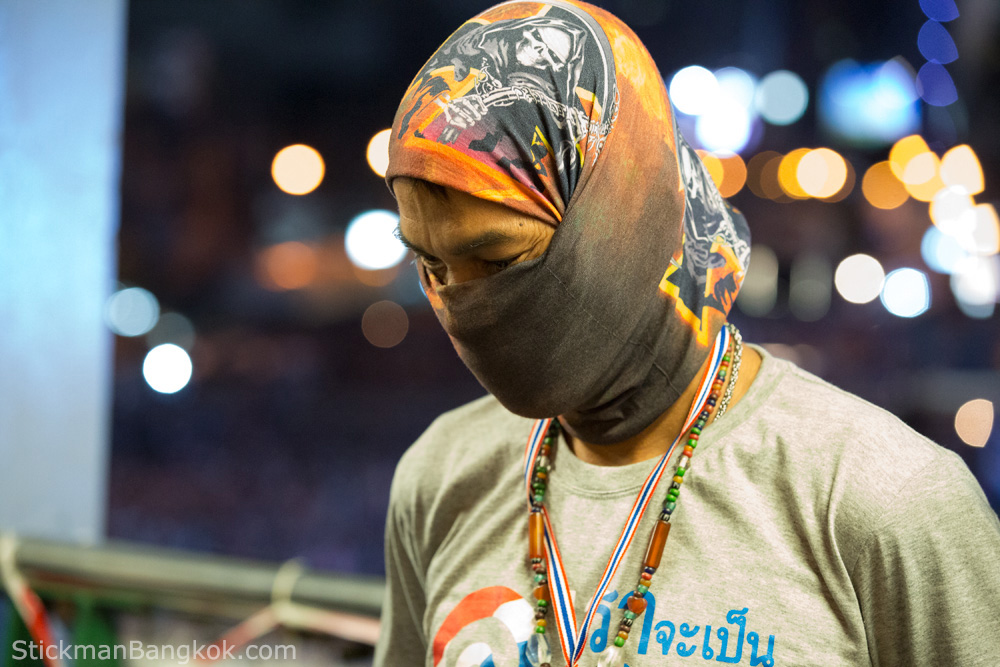 Asoke may have been quiet by day, but it was bedlam by night. Forget what I said about dwindling numbers. Wednesday night saw at least as many supporters out as Monday.


The brief 10 minutes or so that Suthep was on stage and the half hour preceding his arrival saw massive crowds at Asoke. The skytrain and underground were mobbed and streams of protesters used Soi Cowboy as a short cut to get to and from
the protest area. These are the sorts of scenes you can expect in downtown Bangkok if you are out and about at this time – and you just don't know when and where. As per today's previous update, Asoke was very quiet even late afternoon,
and then early evening it was chaos. Like I said, the situation is fluid.

The Bangkok Shutdown, It's Getting Bigger!