I hadn't intended to visit the Lumpini Park protest site last night, but my weekly Patpong visit was cut short. I was in the area so why not take a stroll around the protest area, see what was going on and get a feel for the vibe. 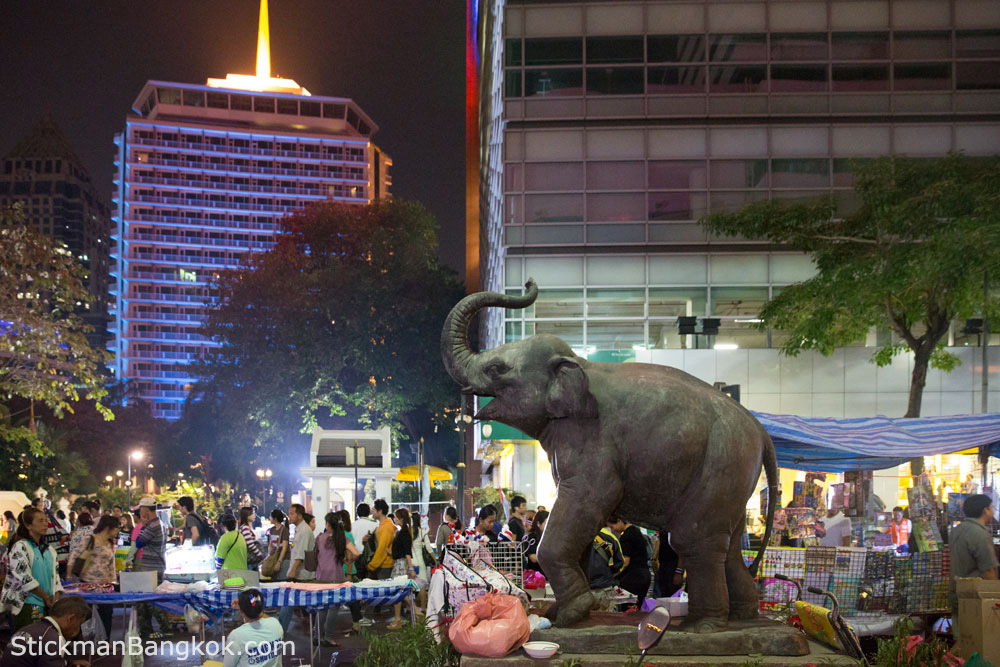 The top of Silom Road is closed. From the Sala Daeng skytrain station all the way up to Lumpini Park has been turned in to a walking street with a street market. Everything is sold from food to clothes to protest-themed apparel and whistles. There are even vendors selling items specifically for protesters like ear plugs and fold-cup chairs.

The Rajadamri / Rama 4 / Silom intersection is closed, as is the overpass above it, meaning you can walk from Patpong to Lumpini Park right up the middle of Silom Road without any worry of being hit by a vehicle. 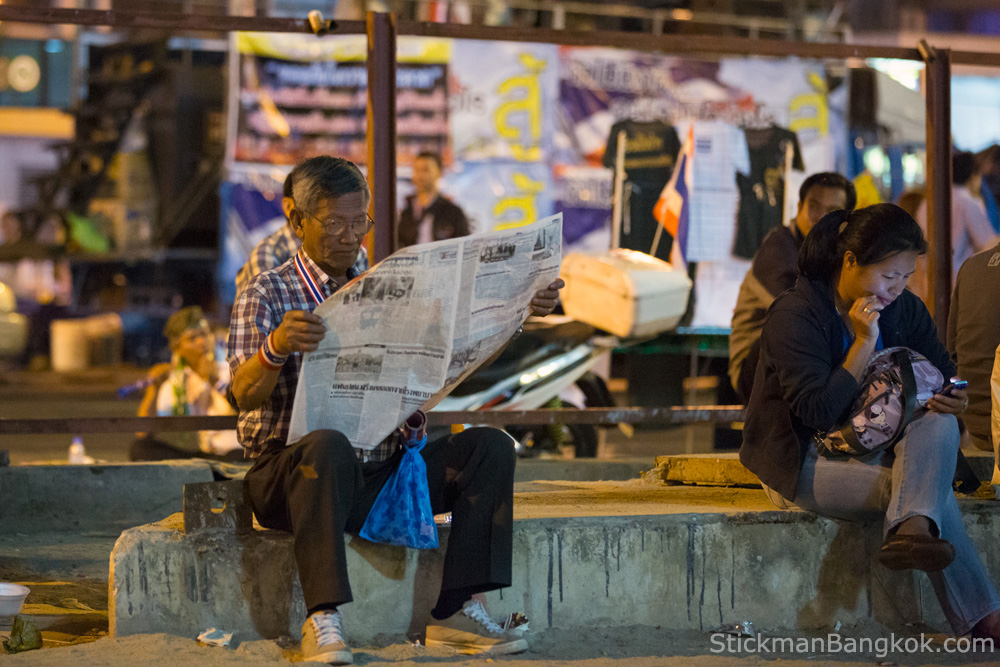 The crowd at Lumpini Park was light, with perhaps several hundred people assembled in front of the stage, listening to speakers and watching entertainment.

You hear all sorts of estimates about the number of people attending the protests but I doubt the crowd numbered more than a thousand. There were more people in the area no doubt, some sleeping, others lingering, guards on patrol etc but it was still a relatively small number. 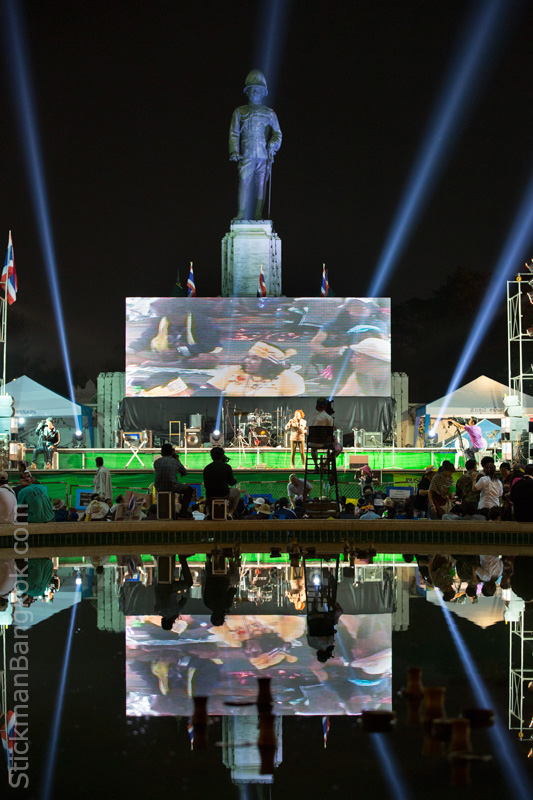 With the pond out the front of the park, the statue of King Rama VI behind the stage and searchlights shining in to the night sky, the Lumpini Park protest site makes a striking sight at night. 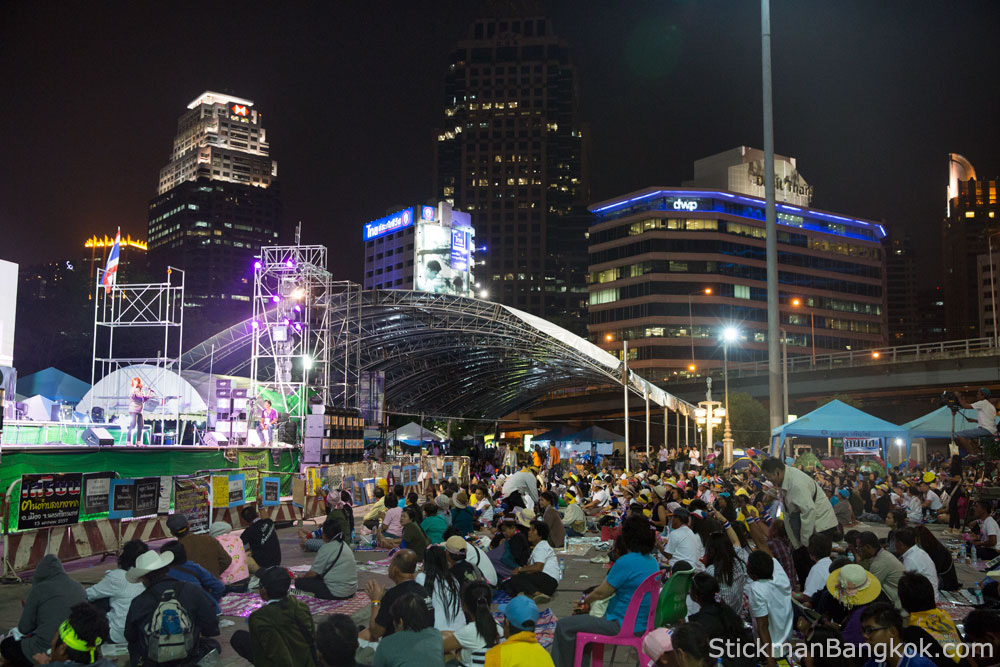 The large marquee tend is new and provides a sheltered sleeping area for those who don't have a tent.

In the background is the Dusit Thani Hotel and various commercial buildings on the southern side of busy Rama 4 Road. 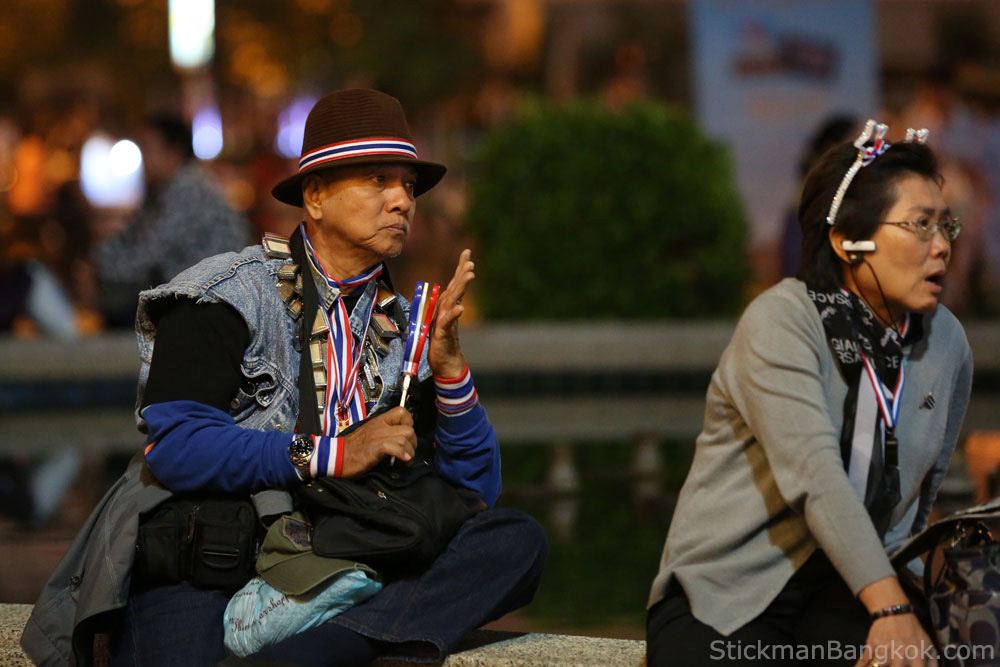 The small crowd (yeah, I know, it's an oxymoron) were dominated by oldies. The average age of those in attendance was well north of 50.

Many are real conservatives who are bemused at the sight of foreigners wandering around, especially if said foreigner appears to be watching the stage and actually following what's going on. I was approached by one fellow who asked me in perfect English if I understood what was going on. What followed was some nice chit chat and by the end there was a small crowd of older Thais intrigued by a foreigner showing interest in Thai politics. 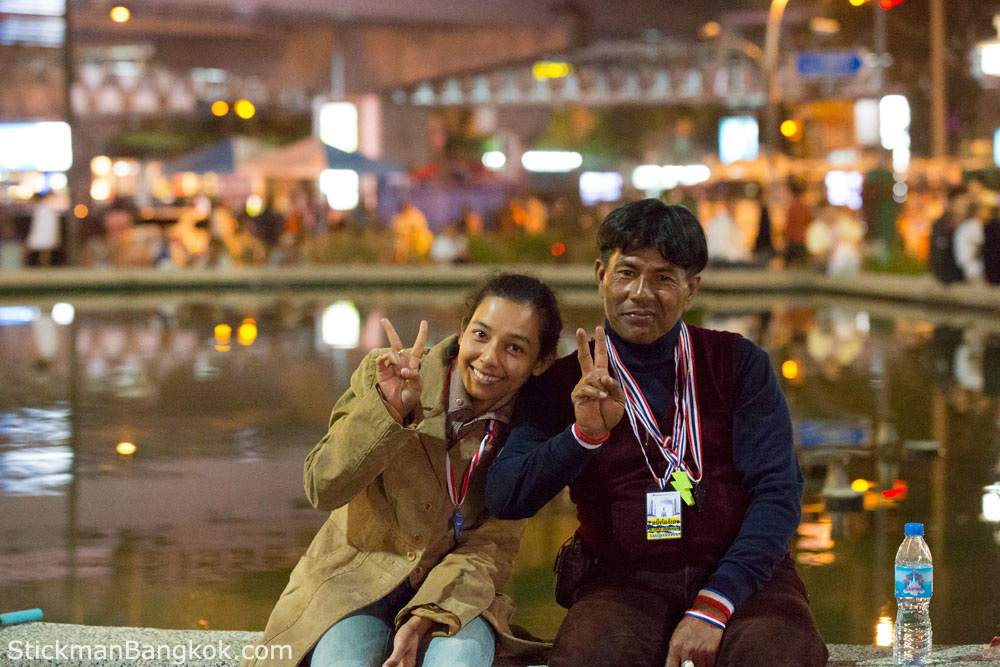 There were some younger folk present, but not that many.

It has been chilly in Bangkok the last few nights – at least by Thailand standards – with the overnight temperature dropping to around 16 degrees Celsius. That's jacket weather for many Thais. I have to admit last night while wandering around in a rugby jersey that a sweatshirt wouldn't have gone amiss. 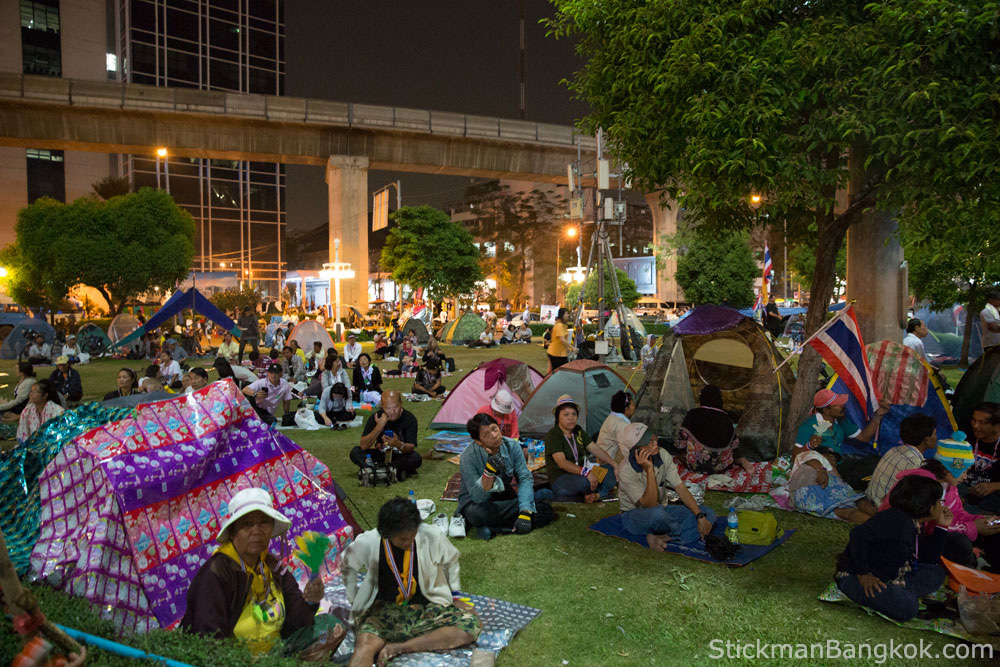 The Lumpini Park protest site at night really is a pleasant setting. Some were sitting on the ground in front of the stage, others parked their derriere on the grass around the tents off to either side of the main park entrance. 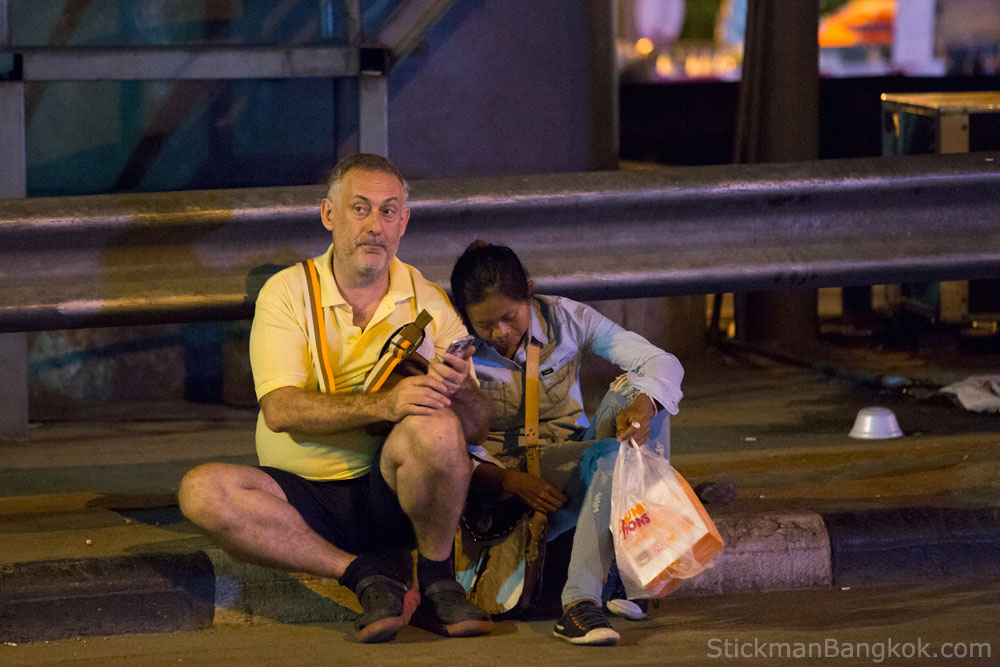 It wasn't a Thai only affair. The odd foreigner could be seen, although nothing like the number you see at the busier Asoke intersection. 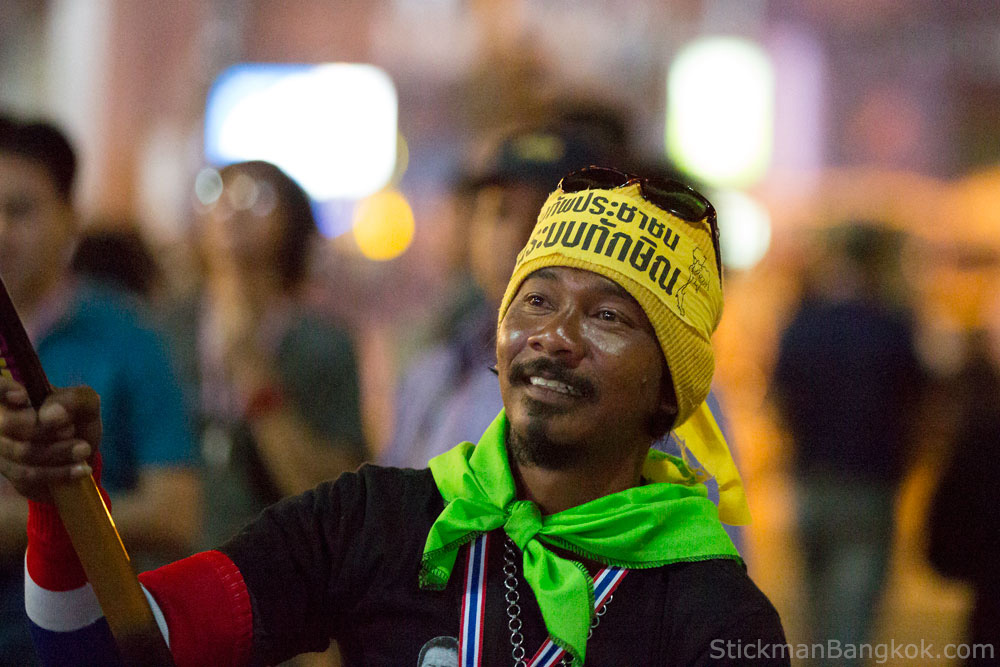 This fellow went about his duty with pride, slowly waving the national flag back and forth, a grin permanently painted across his face. It looked like hard work but his smile never faltered. 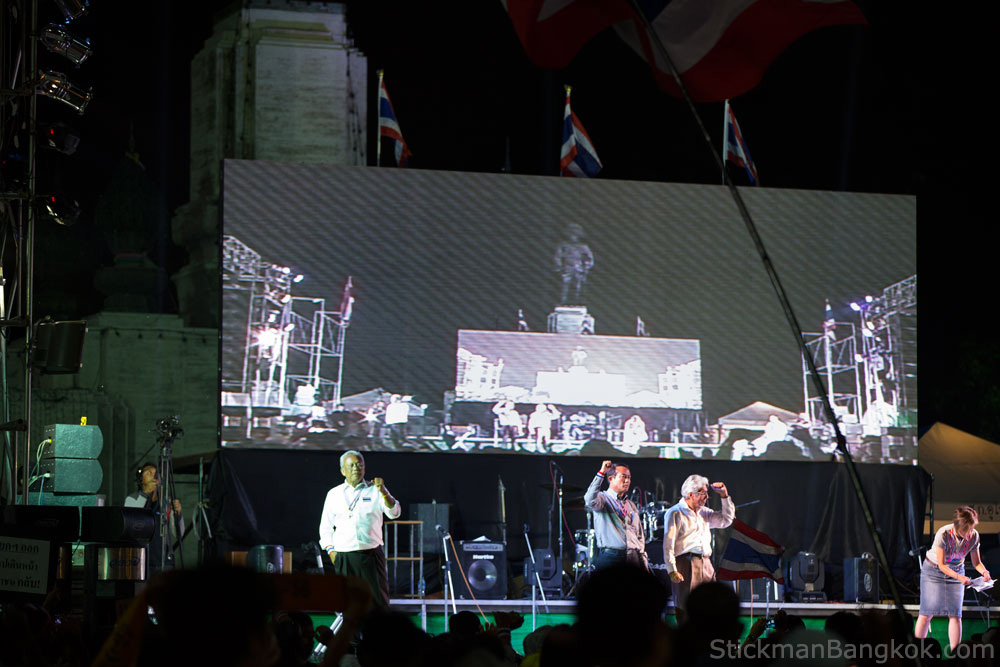 I hadn't been following what was happening last night and was surprised to see the figurehead of the movement and its leader, Kamnan Suthep, speaking to the crowd. He looked tired. His speech was short and he thanked the crowd at Lumpini for their support and apologised for his brief stay, explaining that he had a long walk the next day and had yet to have his evening meal – and at that point it was pushing 11 PM. 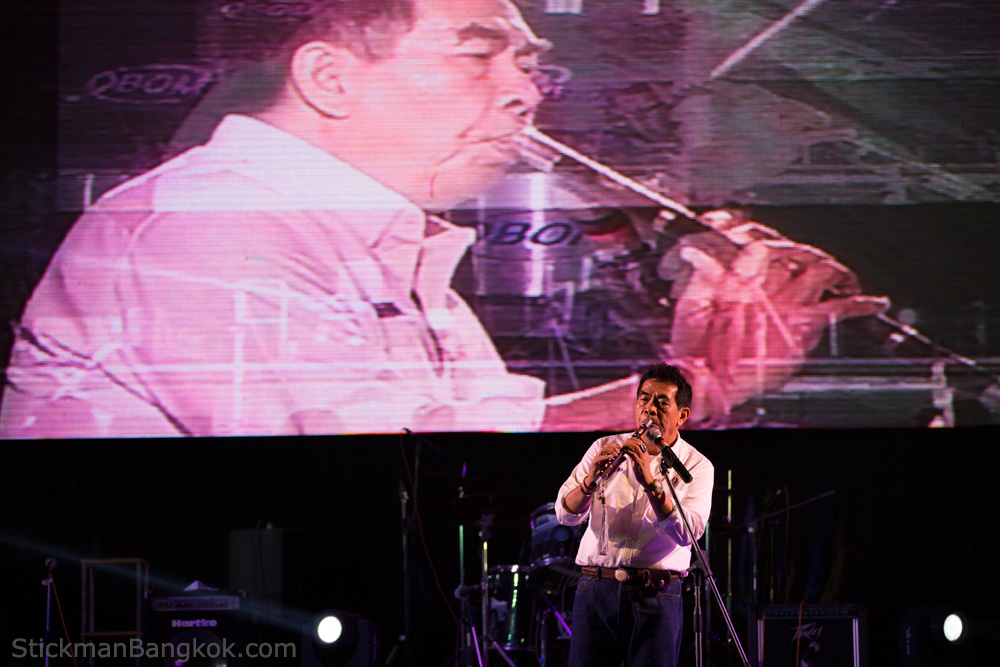 After Suthep departed the entertainment continued. You get the feeling that the crowds can get restless so speakers and entertainment are organised to keep the crowd interested. The entertainment at Lumpini was first class. After Suthep left this fellow came out and played (I think) the flute. He was really, really excellent – this coming from someone who doesn't have an appreciation for that genre of music. 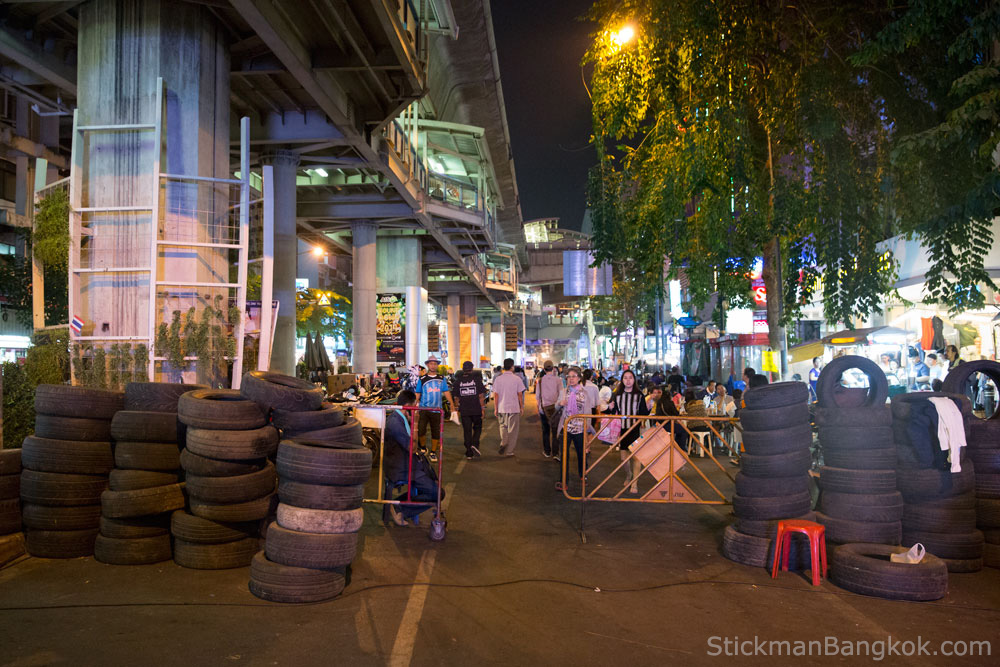 The barricades that are slowly being erected at the various protest sites aren't a good look. Old tyres give the protest sites a foreboding look and that, along with the guards, are all a bit of a PR disaster. I can understand the need for security but if I have one criticism of this lot compared to the red shirts it is with the guards. They look rough, can be abrupt and they just give a plain bad impression. 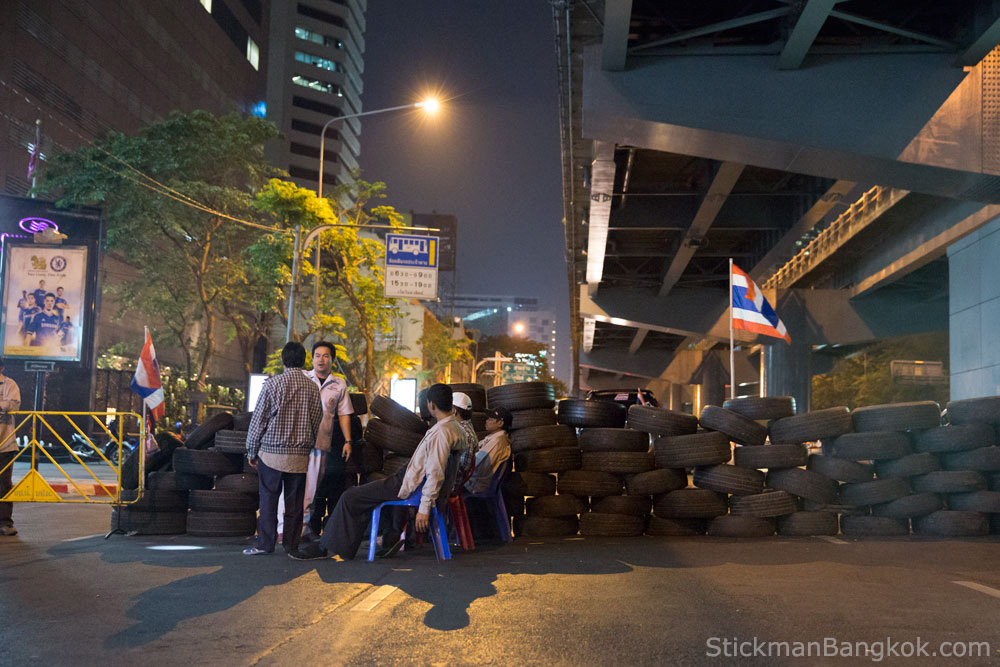 On Rama 4 Road, about 200 metres west from the top of the Silom Road another barricade has been set up.

As the clocked ticket slowly towards midnight, the market at the top of Silom Road was taken down, people drifted away and the area started to feel deserted. It may be surrounded by tall buildings and there may be lots of dark shadows, but the wide open spaces make the Lumpini Park protest site seem rather safer than other protest spots. Personal danger? I didn't feel any. 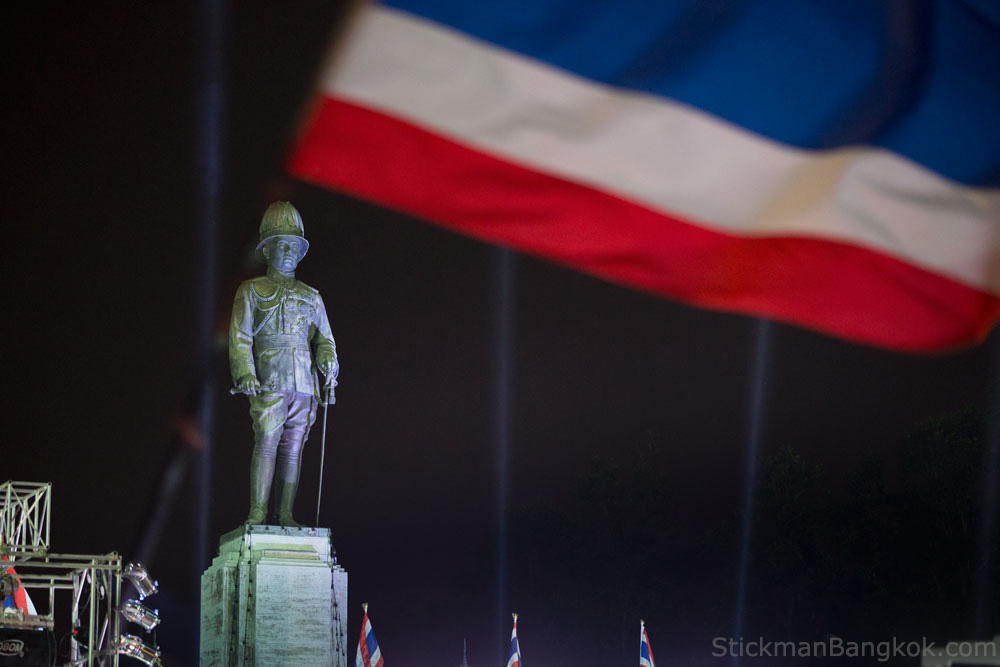 A statue of King Rama VI presides over the park. What would he make of these goings on?