There have been no updates posted for the past couple of days because I haven't seen any major goings on or observed any real changes. Much of what I have said about the patterns of the people, the atmosphere at the protest sites and the inaction of government agencies remains the same.

The caretaker government announced an emergency decree which came in to effect on Wednesday. In simple terms it gives the government greater powers to deal with the protest situation. Public gatherings of more than 5 people aren't allowed. The government could impose a curfew. People can be arrested without an arrest warrant and held for 30 days without charge. There are a number of additional tools the government can use. At the time of publishing, some 2½ days after the emergency decree came into effect, none of these tools appear to have been used (yet). 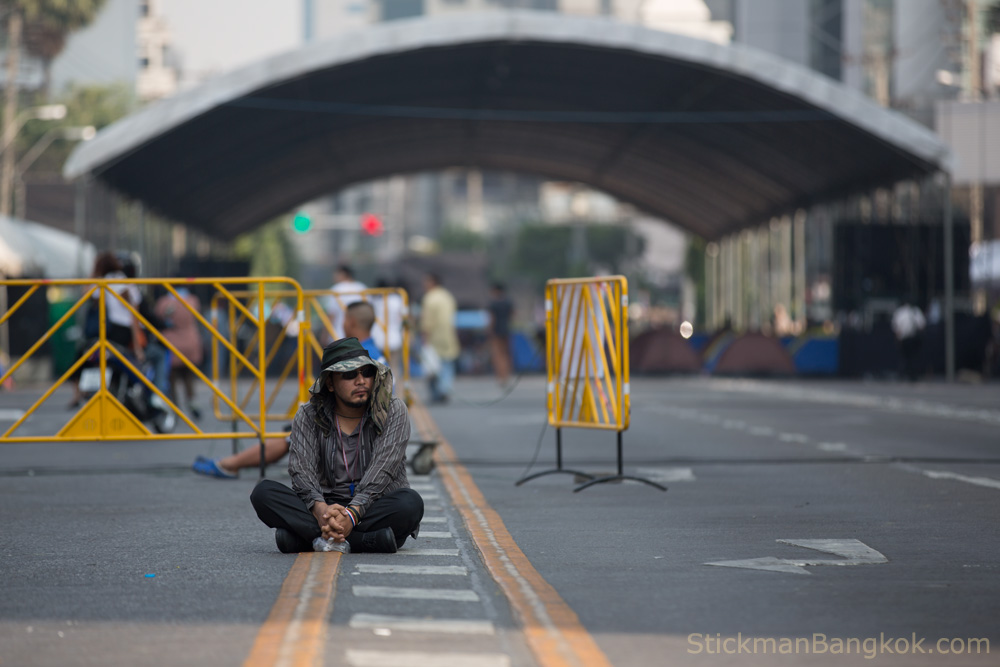 It's now 11 days since the Bangkok Shutdown started and clear patterns are emerging. At most protest sites there is a modest number of permanent resident protesters – those who have come from out of town who are braving the coldest overnight temperatures Bangkok has seen in 30 years to sleep under the stars. By day the protest sites are quiet, but by night the numbers swell as Bangkokians flock to them after work. Come 9:30 PM or so people start to drift away and head home and come 11:00 PM, the numbers have dwindled and it's mainly the permanent residents left.

Whenever the protest leader Suthep visits a protest site the numbers swell significantly. He is the major draw and frequently goes on long walks around the city rallying up support, walks which draw thousands and thousands of supporters joining him. 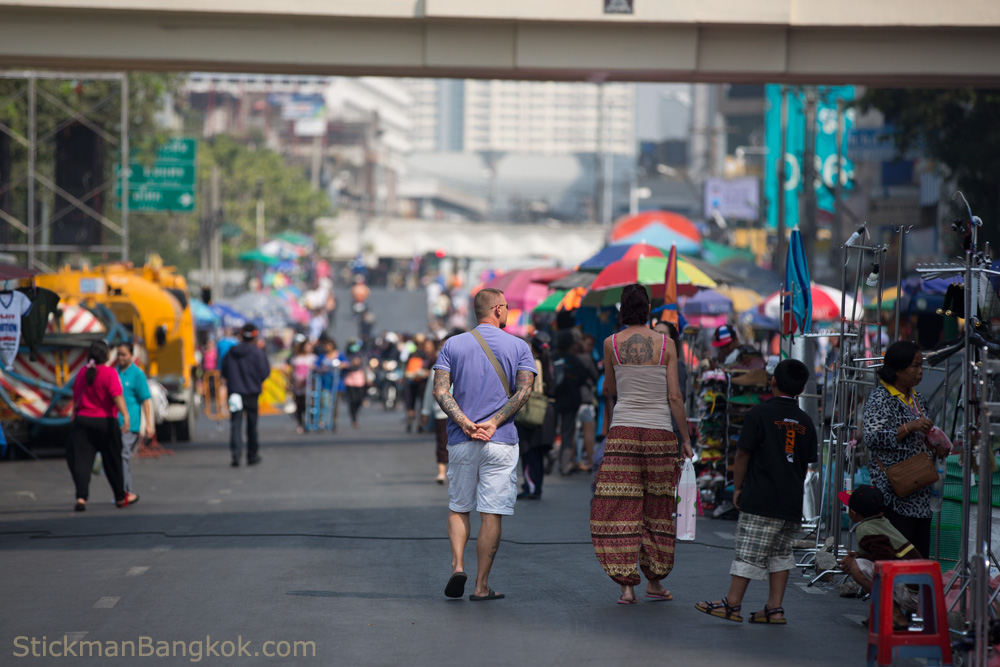 Parts of the Rachaprasong Intersection and Lumpini Park / Silom Road protest sites have been turned in to street markets / walking streets and have attracted foreign visitors.

I get the impression that those who have not postponed or cancelled their trip to Bangkok and who venture out to the protest sites find it all rather amusing, possibly because it's more laid-back than they would expect a political protest to be.

I have not heard from any visitors who have been seriously inconvenienced, or worse. The impression I get is that those who make it here find the protest almost something of a bonus. There is a danger something could happen at the protest sites – 9 people have been killed and 500+ injured since the protests began – no-one has said to me they felt they were in any danger. 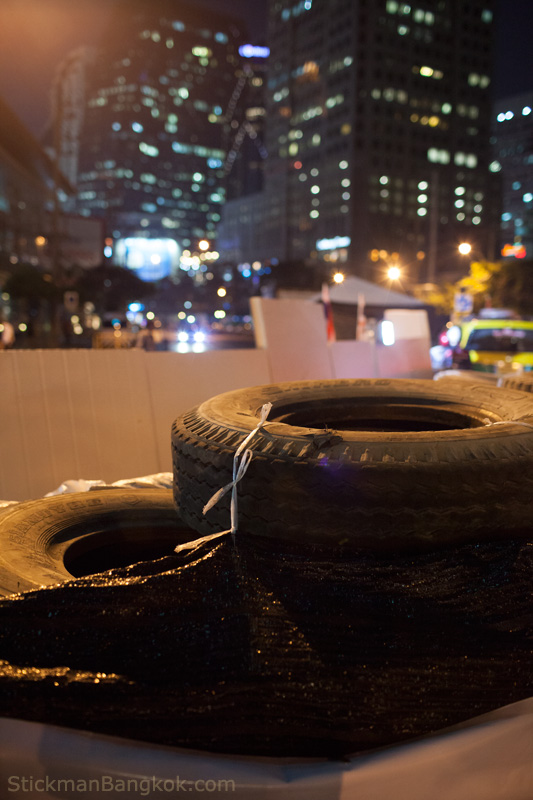 Intersections and roads that may be open by day are often closed by night. Sukhumvit Road near Asoke becomes a car park with two, sometimes three rows of cars parked up. More checkpoints are being erected with piles of tyres blocking some roads forcing vehicles to turn around. Few are allowed to pass through.

Policemen aren't seen anywhere near the protest sites. While some may find this appealing, there is increasing lawlessness. There's more graffiti and much of it has foul language. Some bank branches near protest sites are open shorter hours than usual. Some businesses are closing early and some 24-hour businesses near protest sites are reviewing whether remaining open late at night in an area with no police is wise. Scofflaws are riding their motorbikes like they're competing in the world superbike championship. The worry is that if anything happens (perhaps totally unrelated to, but in the vicinity of a protest site), there are no cops nearby and there may even be a reluctance to attend or deal with an incident. You could be on your own. That's a worry.

To the casual visitor spending a few days in Bangkok this might all seem rather novel. For many of my expat friends, however, the whole situation starting to wane. Expats who live / work near the protest sites, or who have businesses near protest sites, are fed up. Sales are down, drastically in some cases – and to make matters worse January is always their best month. High season has been destroyed. Any business whose customer base is primarily tourists is probably doing it tough. 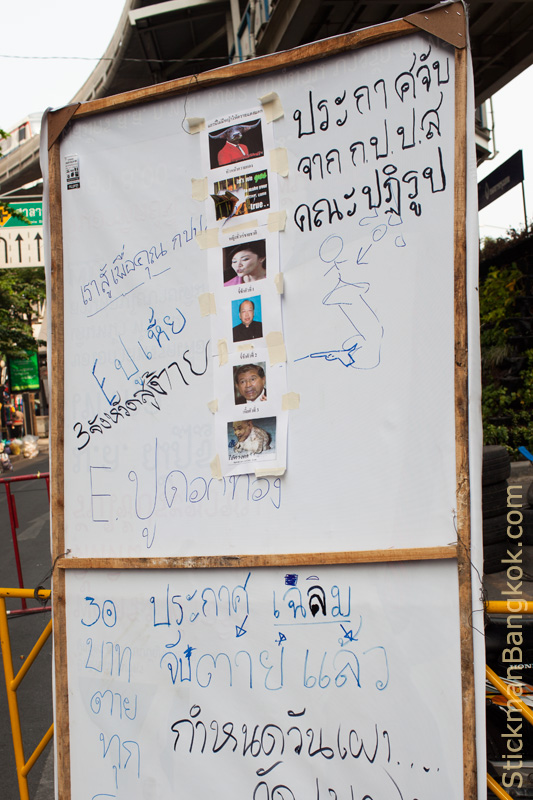 There's more profanity on signs (in Thai and English) and more general silliness in what could perhaps be interpreted as growing frustration amongst some protesters. A few days ago some protesters destroyed the sign at the front of Police National HQ. Other such silliness has been reported and can be seen around town. As one expat friend said, things are getting worrisome because the attitude of many protesters is very much, if you're not with is you're against us!

The ridiculous sign which is displayed on Silom Road. Get one of your Thai friends to translate it for you…just don't show it to them if they are not in favour of the protests for it's highly offensive. 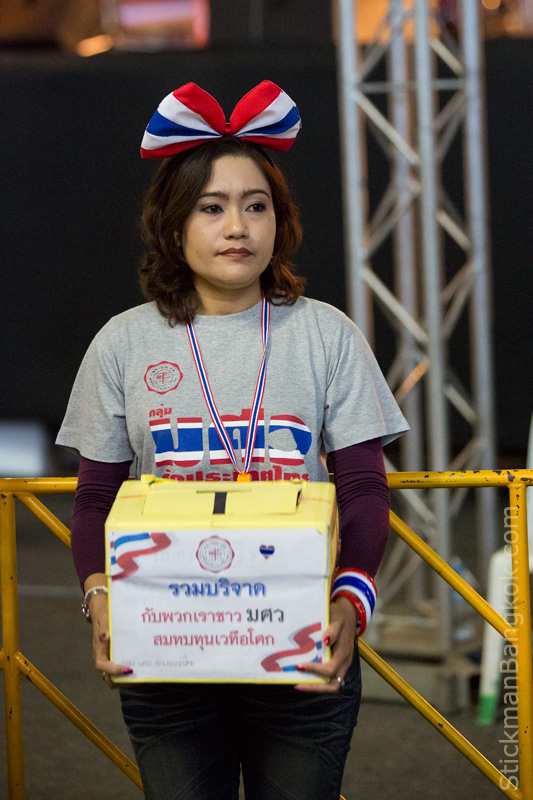 Rumours are being spread by those who support the government that some protesters are being paid to stay at the protest sites. I have no idea if this is true or not. What I have seen with my own eyes is calls for donations and pretty girls walking around with donation boxes. A number of times speakers at the protest sites have refuted these rumours. Exactly the same allegations were made about the red shirt protesters back in 2010. Who knows what's true and what isn't?

The protest sites are not getting any smaller. The cost of running them all is not insignificant. One report estimated the cost of the protests running around 10 million baht per day.

When leader Suthep goes on one of his long marches around the streets of the city handfuls of cash are passed to him by supporters and pledges are made, some quite large with amounts of 50,000 baht not unusual. 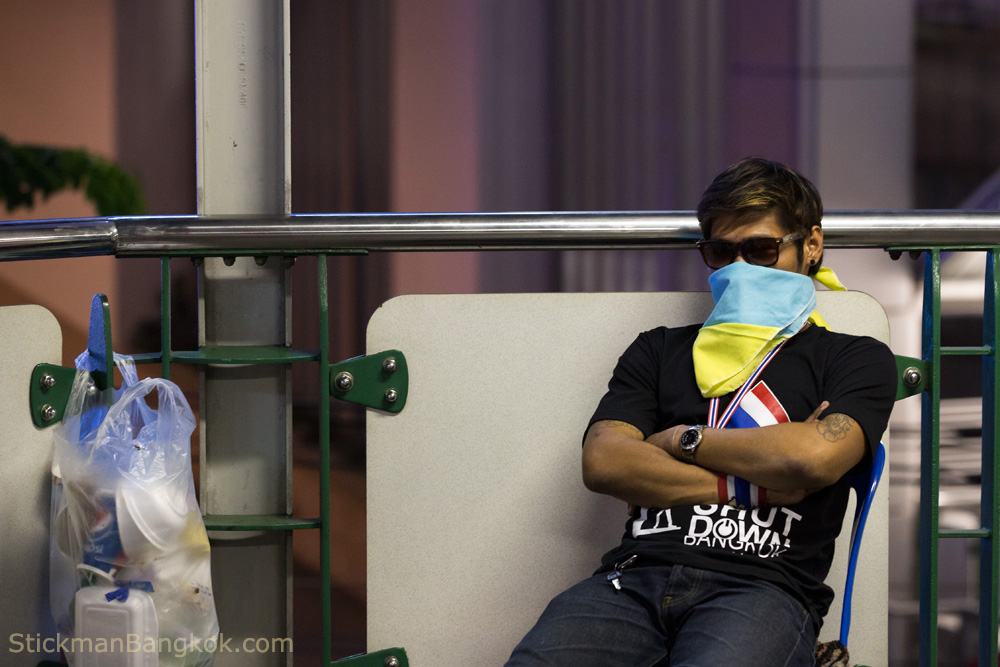 At the protest site I pass through the most often, Asoke, I sense there are more guards – or at the very least they are more visible. I've said it before and I will say it again, these guards are a PR disaster – and I am not the only one saying this. Many expats have said this and even some Thais disagree with the manner in which they go about their duties.

I can understand why the guards are there. With grenades thrown at the Victory Monument protest site which killed one and injured dozens there is a need for security. With that said, with just a little effort they might be able to greatly improve the impression they give people, which I would suggest is far from positive.

The other half is a staunch supporter of the protest movement. She strongly believes in the cause. This notwithstanding, she despises the guards and has not been shy to give a couple some harsh words. At night the guards at some protest sites become more vigilant, checking the bags of those passing through the gate. This is not the cursory bag checks that are common at MRT stations but involves their hands going in to people's bags, moving belongings around to get to the bottom of the bag and searching for, well, whatever it is they are searching for. Bags are rifled through, belongings moved around and there's a worry that something might be planted, or something taken.

In fairness to other protest sites, it seems to worse at Asoke. The guards at the very open Lumpini Park protest site where access isn't nearly as controlled as Asoke are much friendlier and not nearly as vigilant.

Many guards appear to be concealing their identity, covering their face with a bandana and wearing sunglasses whatever the hour. Some even wear a balaclava, a terrible look which makes them look like gang members. And so it should come as no surprise that the inevitable happened. I was taking photos at the Asoke intersection a couple of nights ago, focusing in on the guards for no other reason than their mean looks make them great photographic subjects. The meaner they look, they better. One guard was peering through a mini telescope scanning the rooftops of surrounding buildings, looking for bad guys. I was stood just a few metres away in plain sight of everyone and fired off a few shots. There was no attempt to capture the moment surreptitiously. I had taken the photos, viewed them on the camera's screen and walked a few metres and then I was grabbed by a guard, not the one I had photographed. He must have seen me photographing his fellow guard – and he was not happy. He intimated that he wanted to see the shots I had taken. I showed him. He insisted they be deleted immediately. Now I could have protested and claimed that it was a public place and I had a right to take photos and so on….but that would have been a bad move and just inflamed the situation. Had I done that, there would have been a situation. I deleted the photos and cycled through the shots on the memory card so he could see they had gone. When I got home I undeleted the photos I had deleted at the protest site, which is about as easy to do as transferring the photos on to a computer.

* Who knows, maybe there was a valid reason for the guard forcing me to delete said photos. With this in mind the shot I have chosen to publish from that sequence of shots does not show his face and prevents him from being indentified. At the end of the day, I do not wish to cause anyone any trouble. 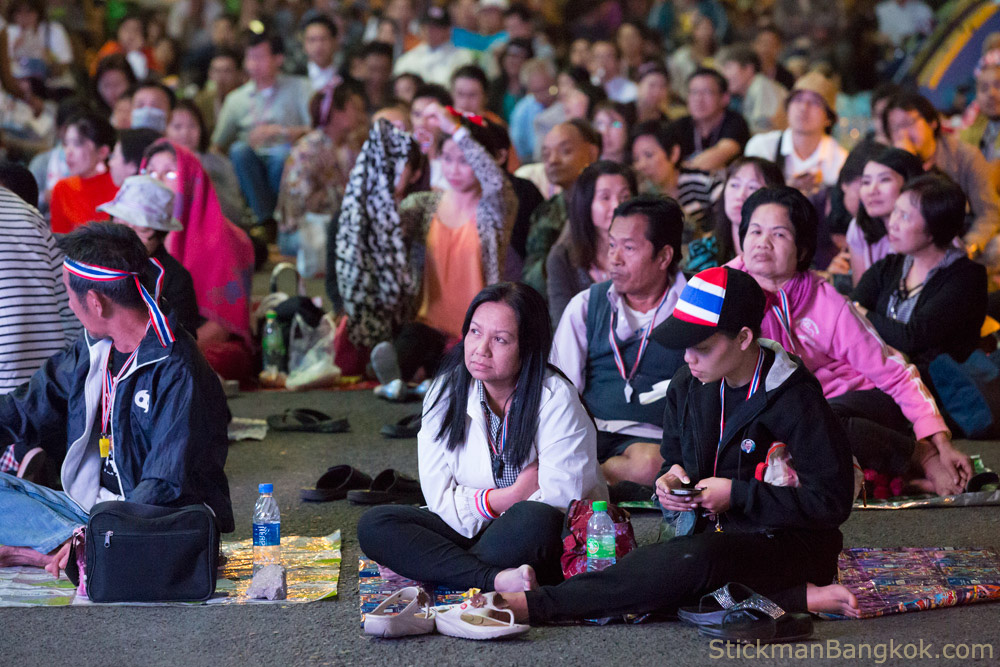 A week ago some of the protest sites had a carnival-like atmosphere and there were smiles all around. When there's entertainment on stage – as is often the case in the evening – the smiles return, but there does seem to have been a change in atmosphere. The sanuk (fun factor) seems to have gone. I might be completely misreading things, but there's a feeling amongst some of my expat friends that foreigners are less welcome at the protest sites now.

The protesters have placards and banners with messages in English so they want the message to get out. At the same time I am not sure they want curious foreigners visiting the protest sites – and they don't seem to like it when questions are asked. It often seems to me that they want us to swallow their message without examining it. That recipe won't gain support amongst foreigners. With that said, some speakers have talked with pride about foreigners resident in Thailand who have shown their support for the cause.

The general election is scheduled for February 2nd and the days leading up to that could get tense. There's a lot riding on the election, if it goes ahead.

There is no end in sight and no-one knows what will happen next.