Bangkok Comes To A Standstill Part 2

I took a few hundred shots around lunch time, rushed home to get the column finished, uploaded and then went out again late afternoon and fired off a couple of hundred more shots.

When I got back to the Asoke intersection around 5 PM the number of people present was just crazy. It was massive – and when you consider that this was one of several protest sites around the city today – and one of the smaller ones – well, the numbers really are crazy.

Today was the first time I really started to wonder about the wisdom of visiting Bangkok at this time. This has nothing to do with any danger, but due to the possibility of being seriously inconvenienced.

It could be very difficult to get to places or get things done. Imagine if you had to get to the airport, or perhaps worse still, from the airport to a hotel. If you were staying anywhere near one of the many protest areas, getting a taxi may simply not have been possible. If you happen to be older and / or less mobile, that could become a real problem!

The one tourist hot spot in the Asoke area, Soi Cowboy, was over-run with protesters and while bars were opening up when I left around 6:20 PM, I wonder what sort of trade they will do tonight? I imagine local expats who may have gone out for a drink will stay home and those who do go out may find themselves turning around before they even get there when they see the crowds, to say nothing of the noise coming from the stage nearby.

The protesters said that the purpose of today's protests was to close down Bangkok for half a day. They succeeded in that. Traffic volume was as quiet as I have seen it in all my time in Bangkok. The protesters are now saying that if they don't get what they want then next time they will shut down the city for a whole day – and that will be a week day, a work day. That would be a nightmare. And then if what they want still isn't delivered then they're talking about shutting down the city for a month! It's starting to get a little worrisome because that is effectively what the red shirts did back in April and May of 2010, so don't think that shutting down parts of the city isn't possible!

Anyway, here are another 20 odd photos taken from late afternoon to give an idea of what it was like. 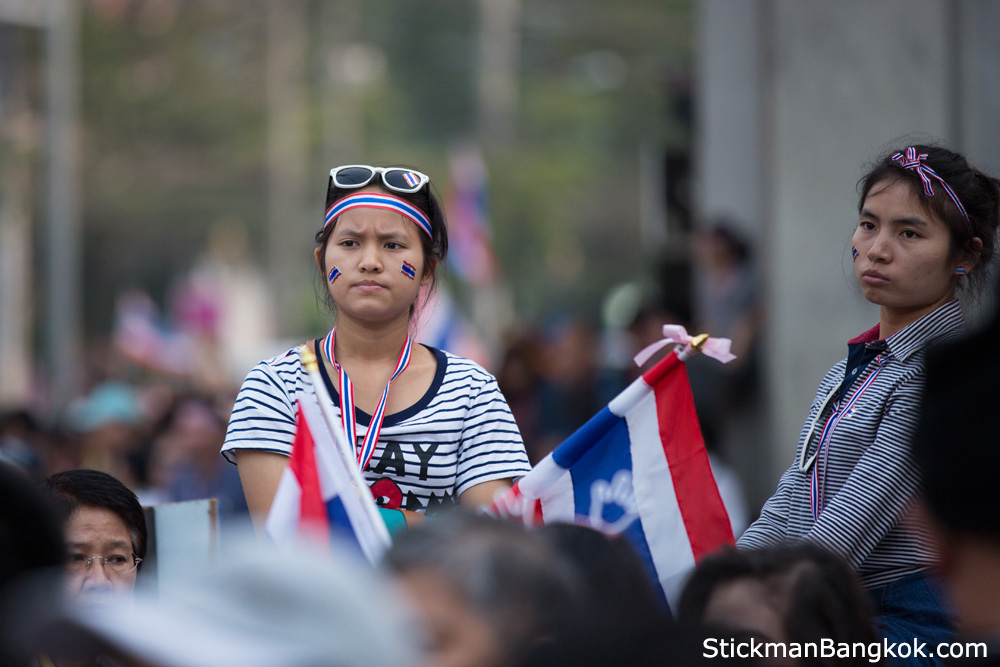 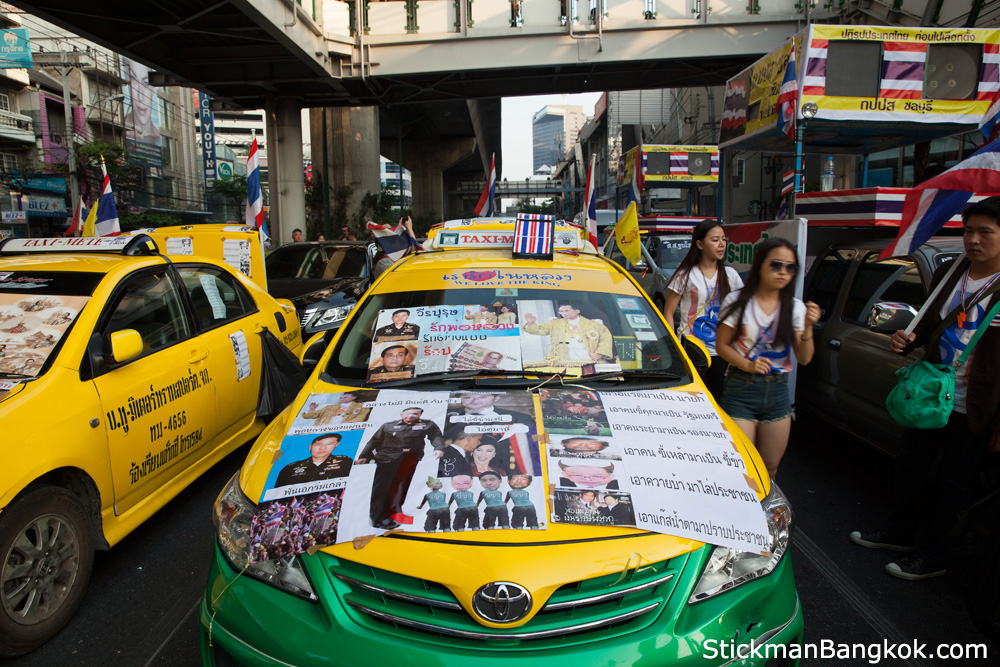 Taxis parked on Sukhumvit, between Interchange and Exchange Tower! 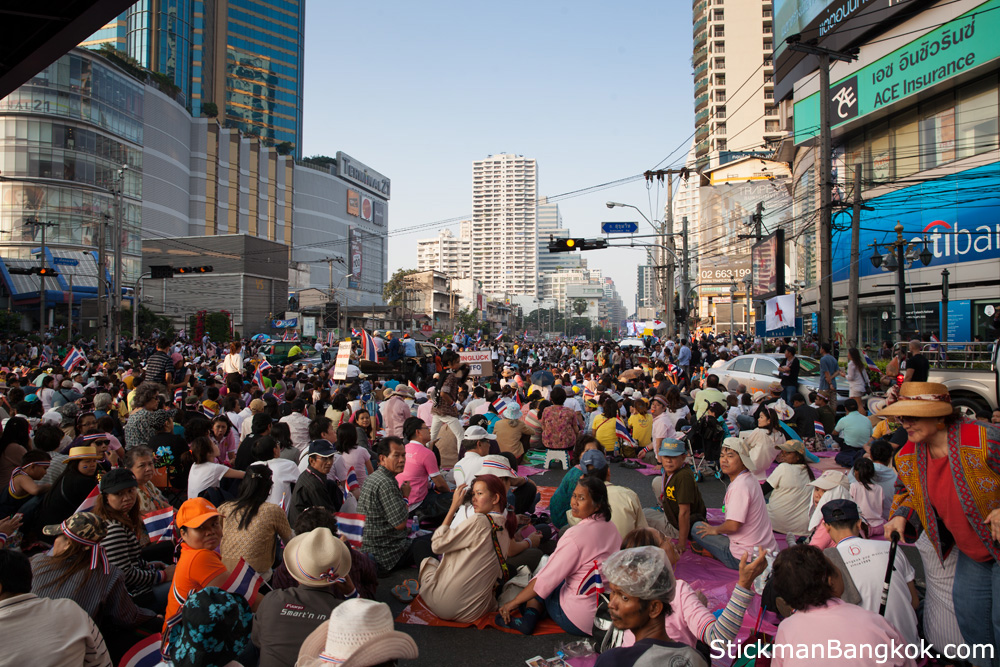 Around 5 PM, right in the middle of the Asoke intersection! 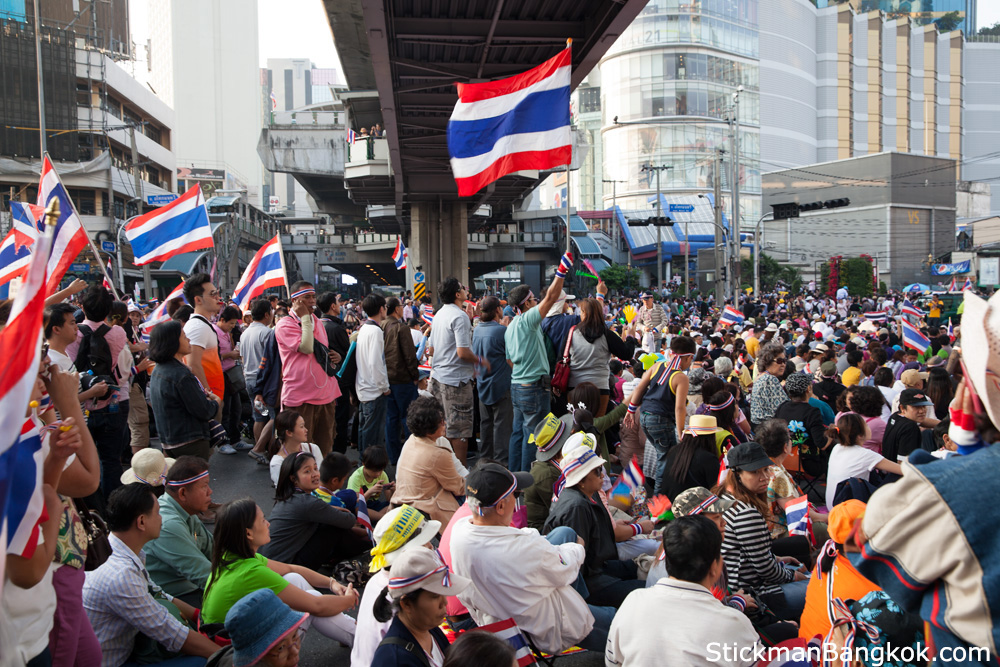 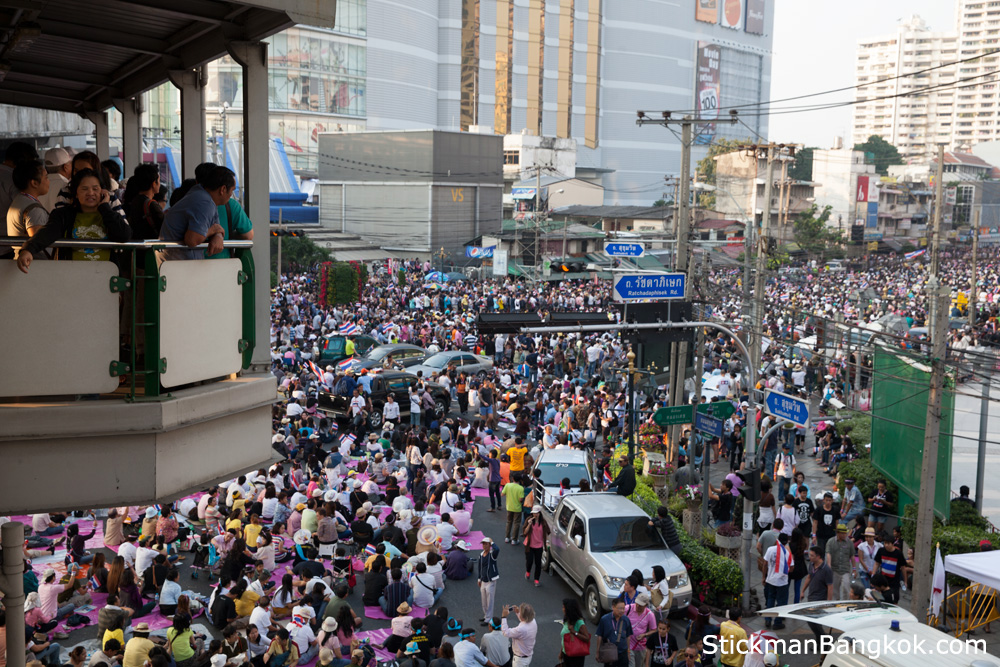 The crowds swelled to peak between 4 and 6 PM. 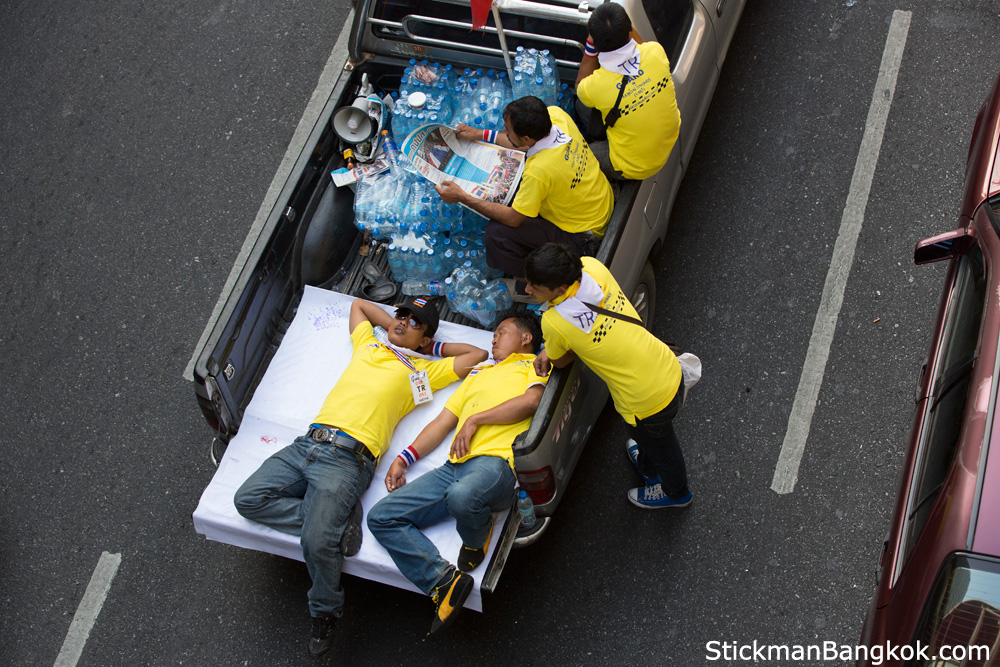 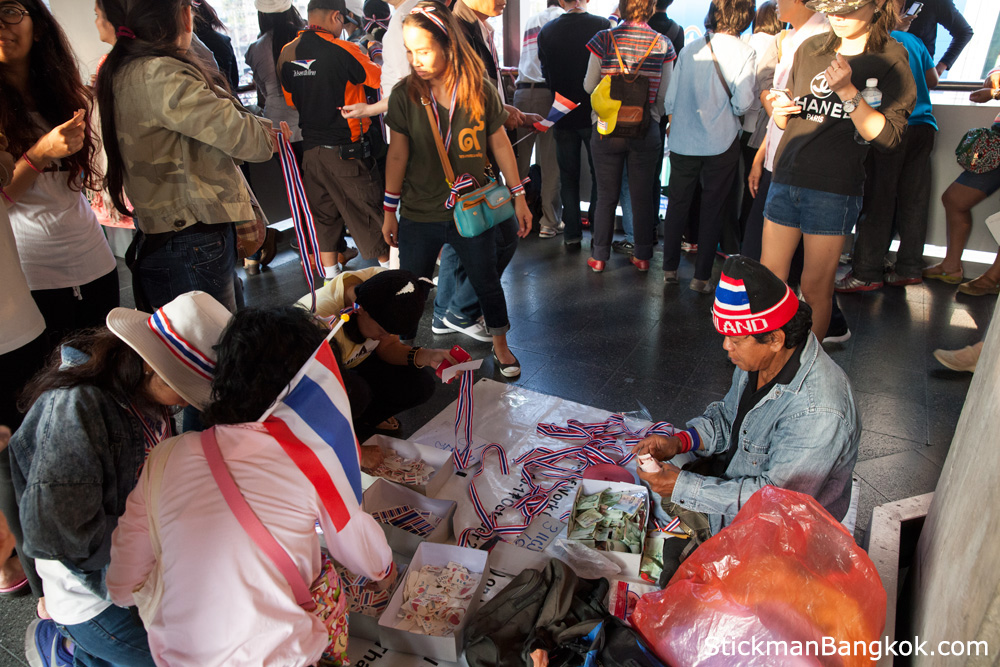 Some vendors did a great trade selling whistles, flags and hats.

It was amusing to see some vendors selling whistles AND ear plugs! 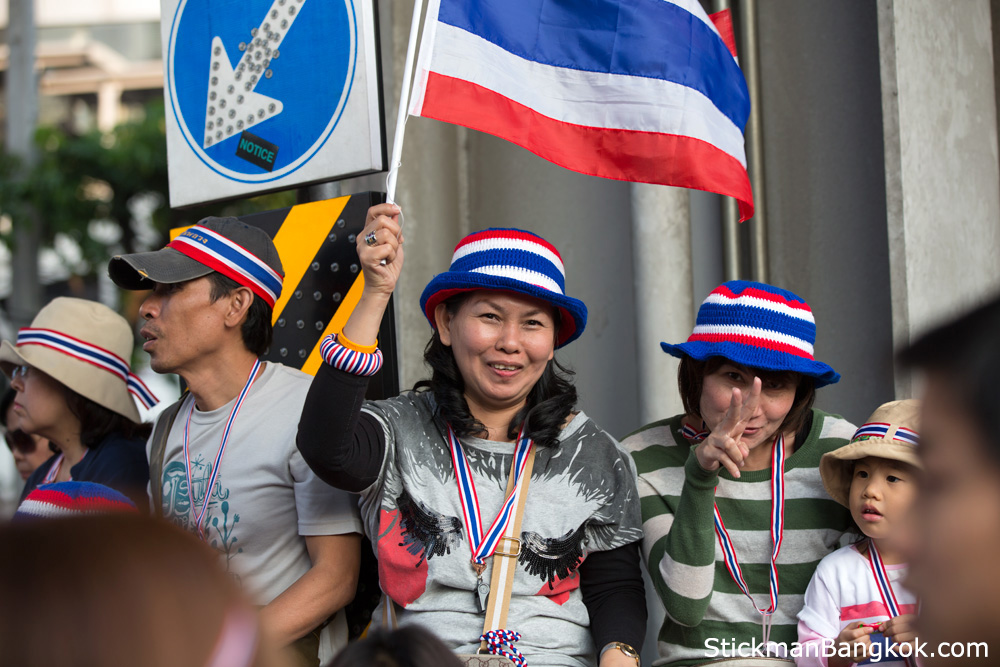 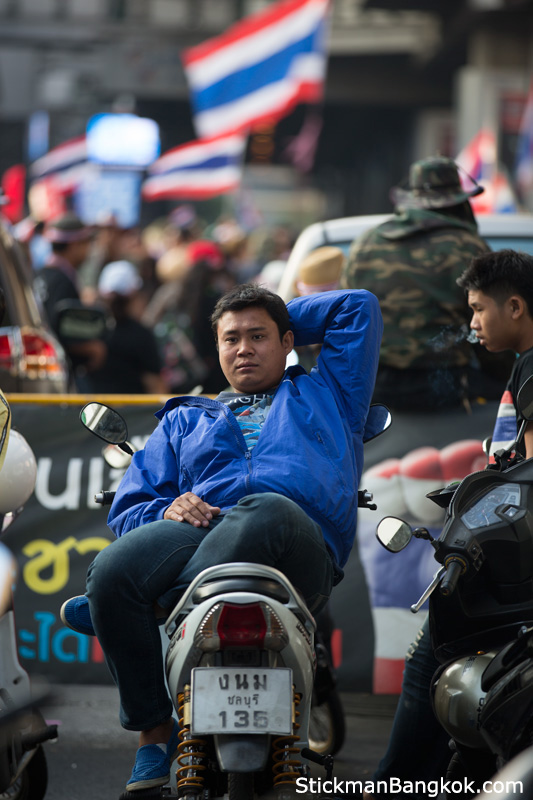 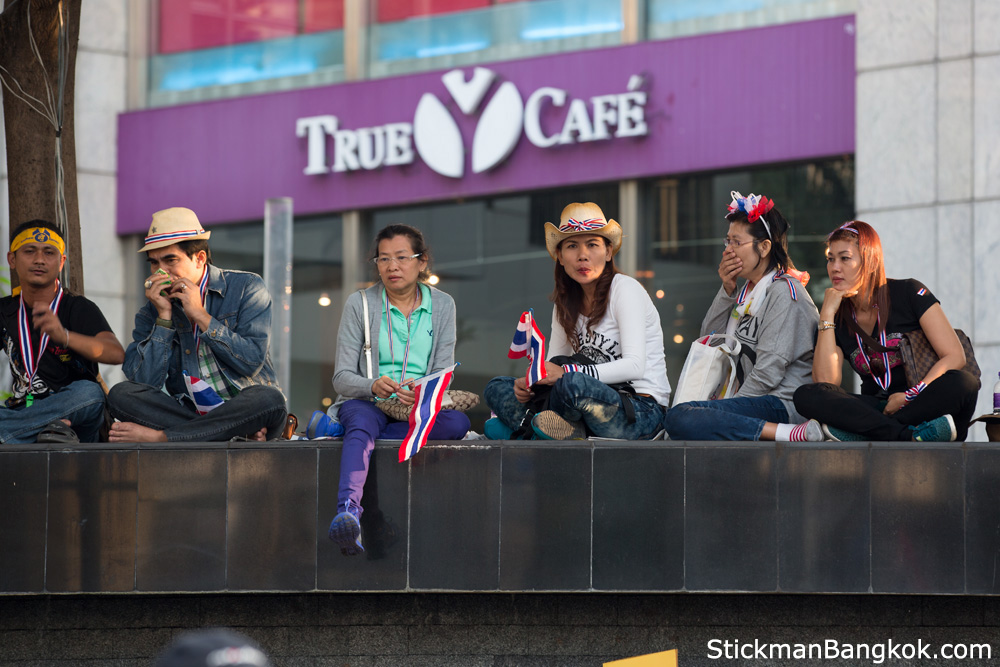 Most vantage points were taken as protesters sought a place to sit.

The prime positions were in the shade, well out of the sun! 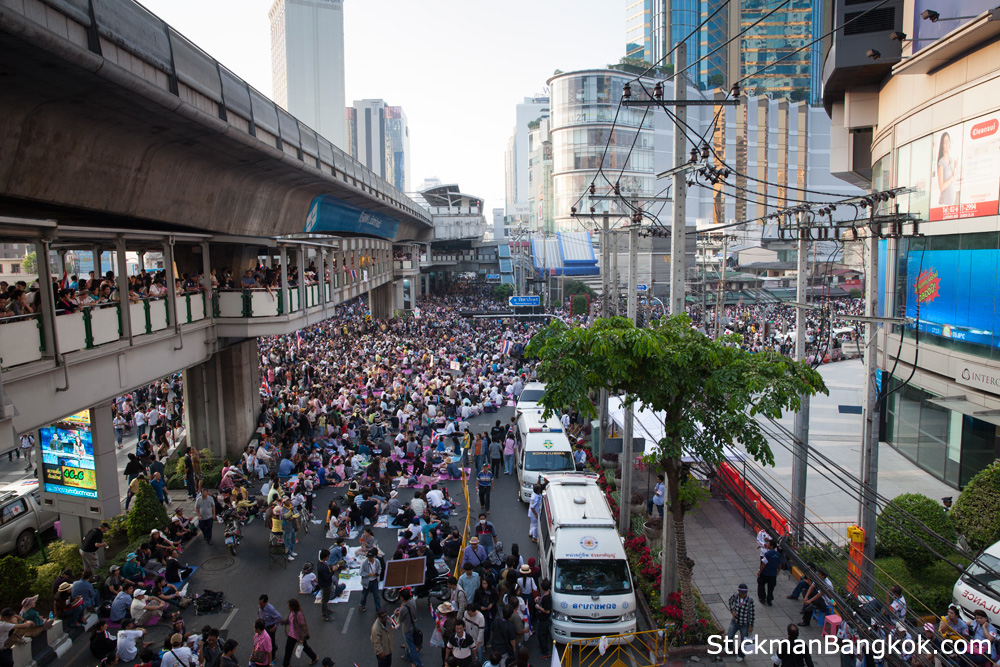 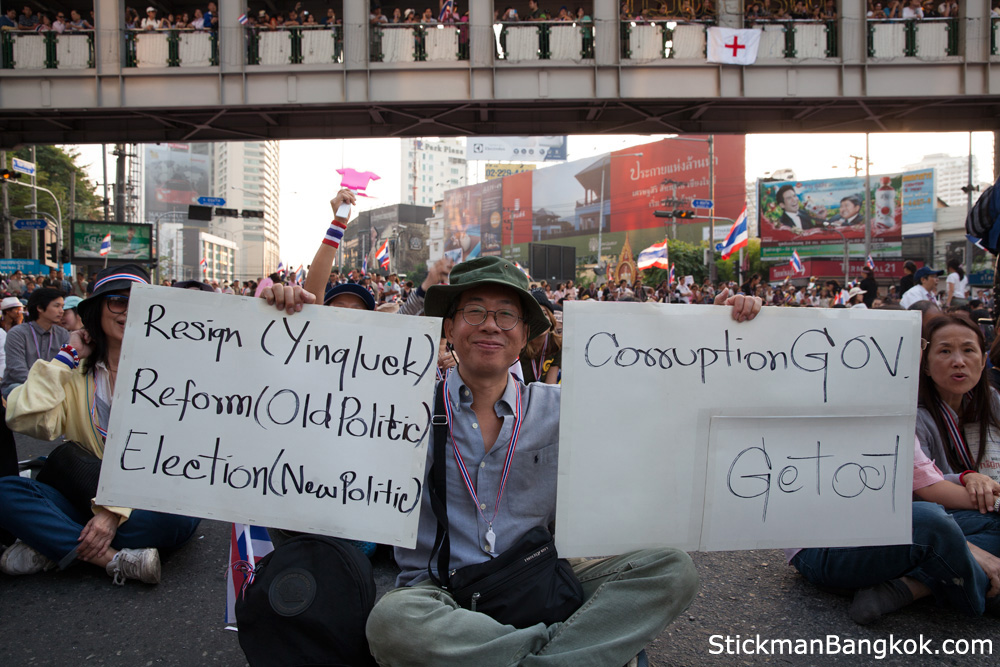 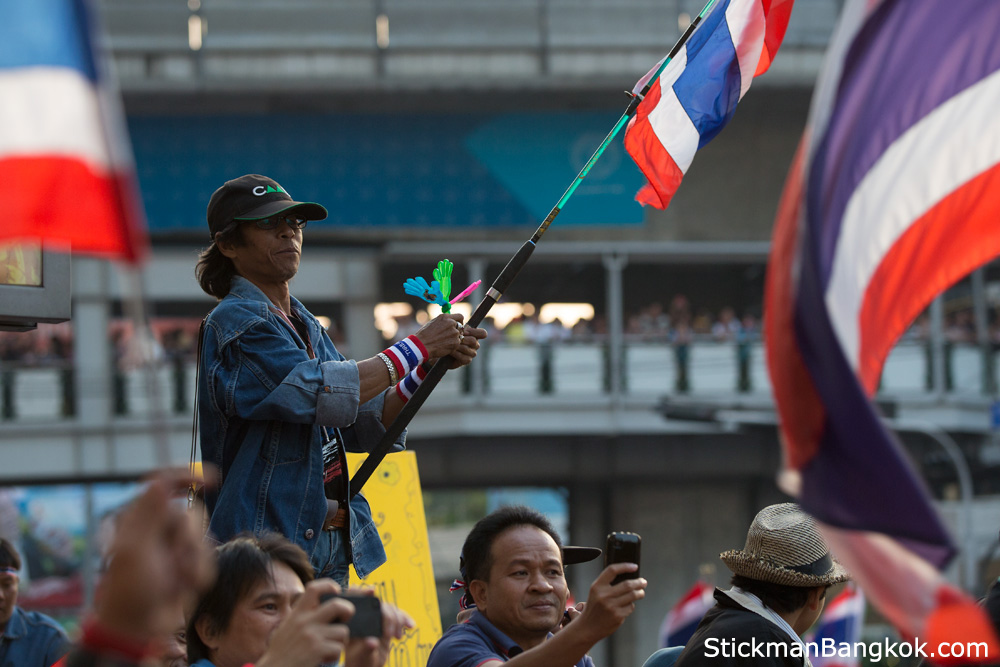 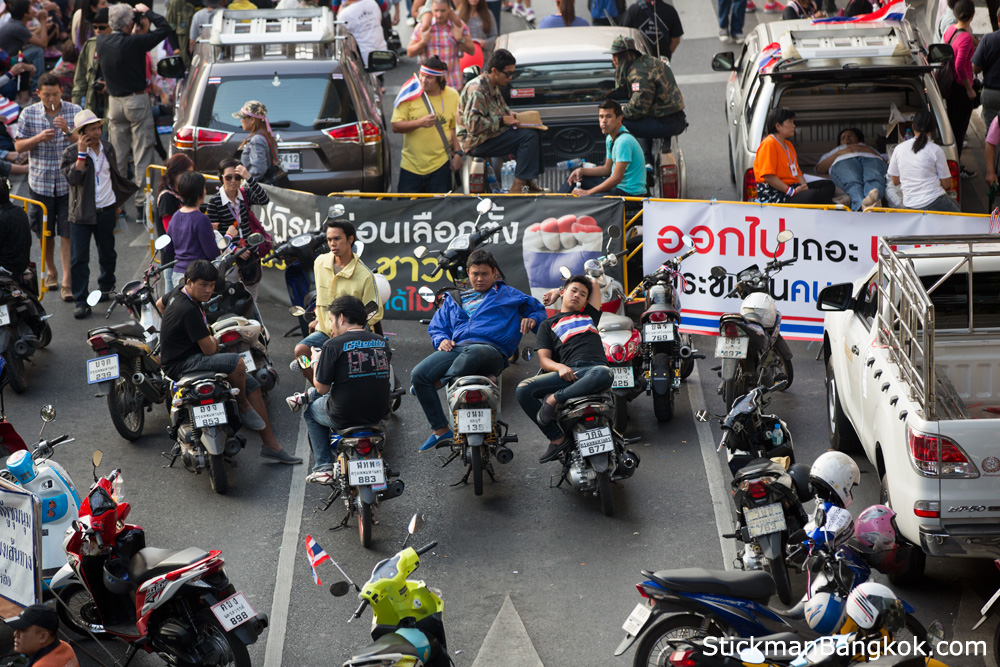 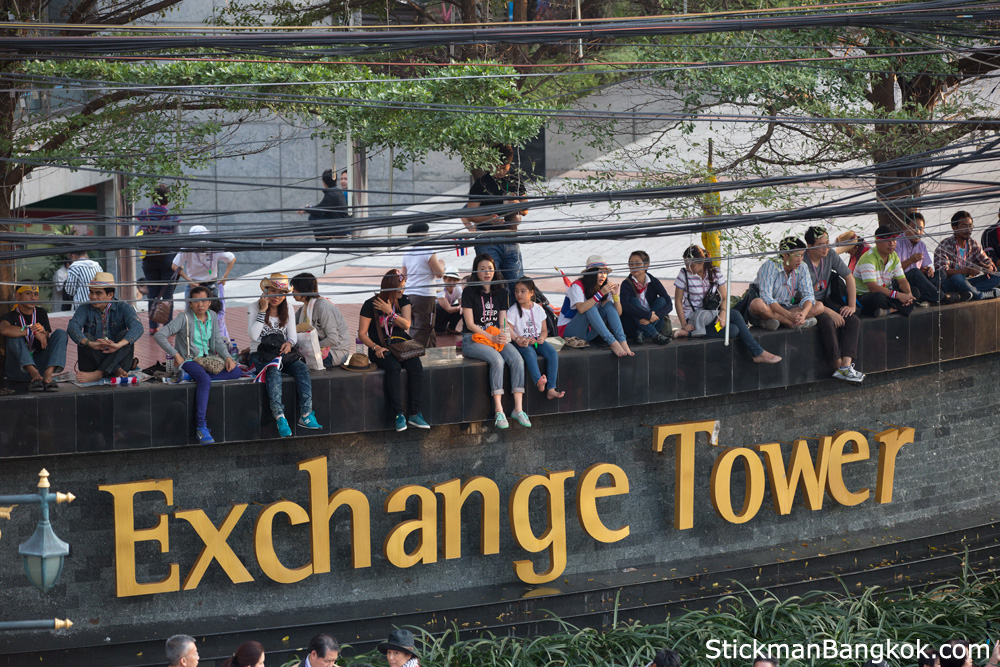 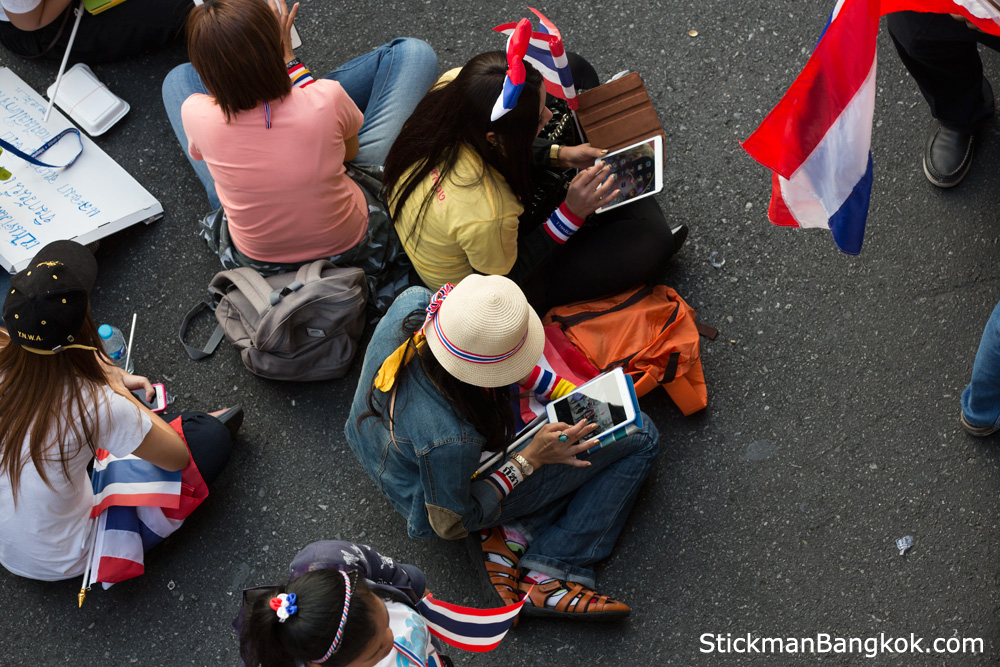 Mobile connections were really slow as thousands took to the 'net on their smartphones and iPads. 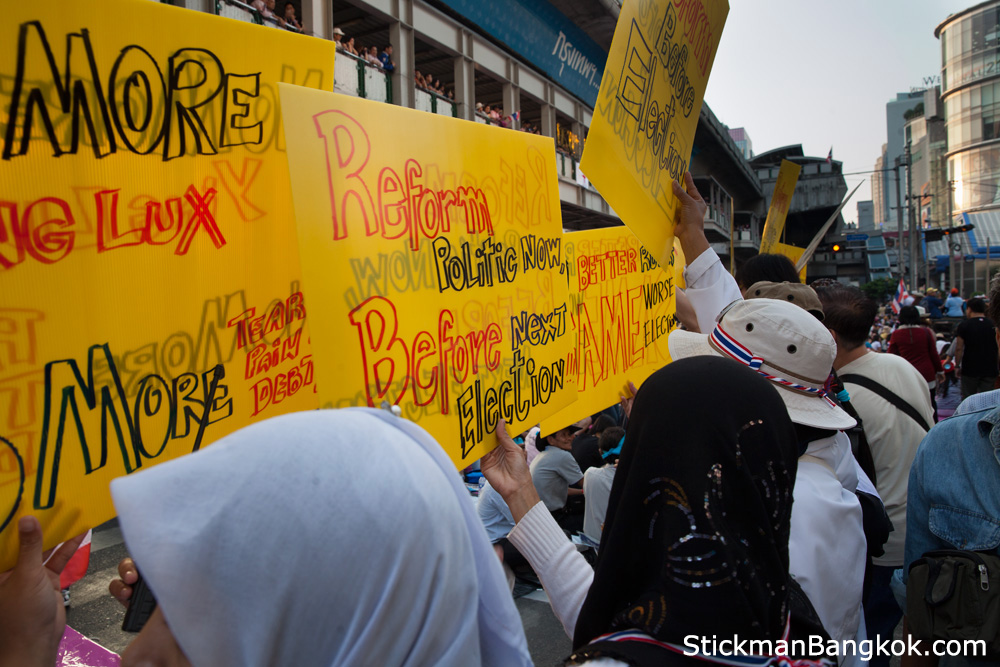 With the south being a Democrat stronghold – and as such anti-Thaksin,

and where Thailand's 4 provinces dominated by Muslims are located,

there were a number of Muslims amongst the protesters. 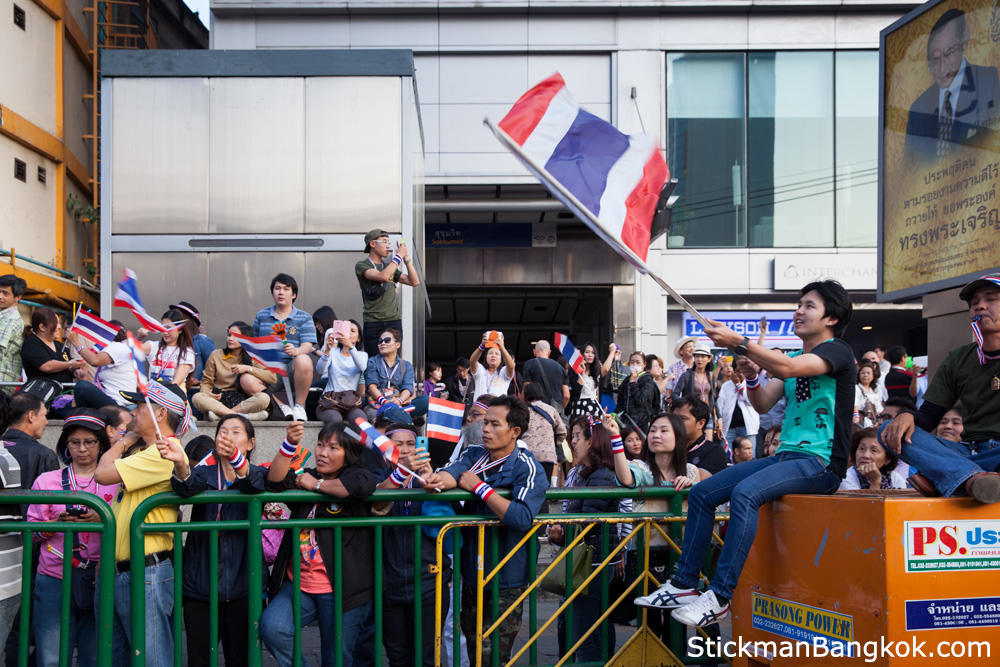 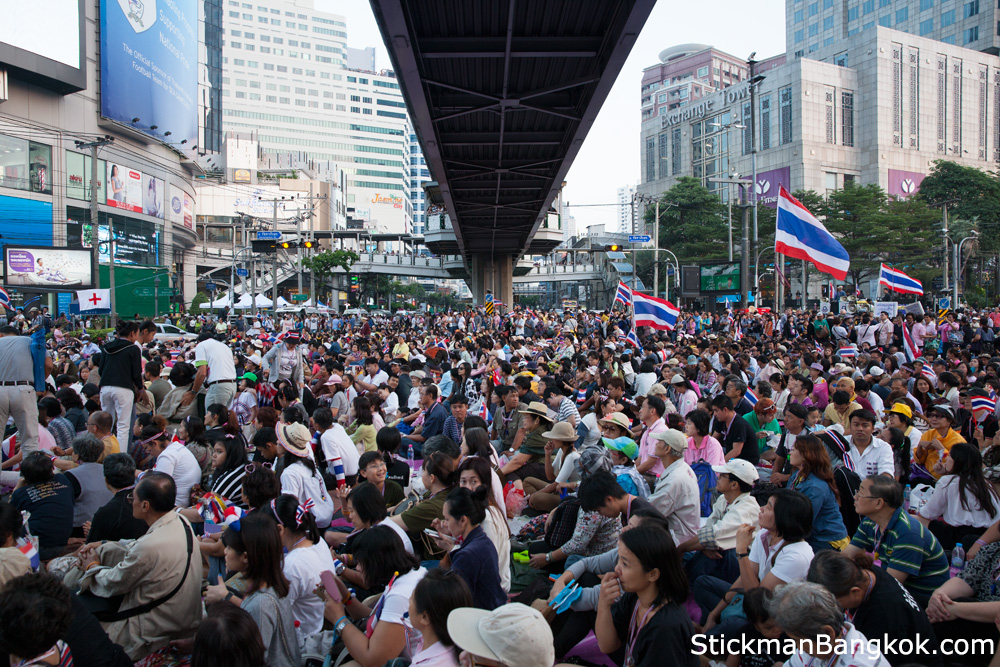 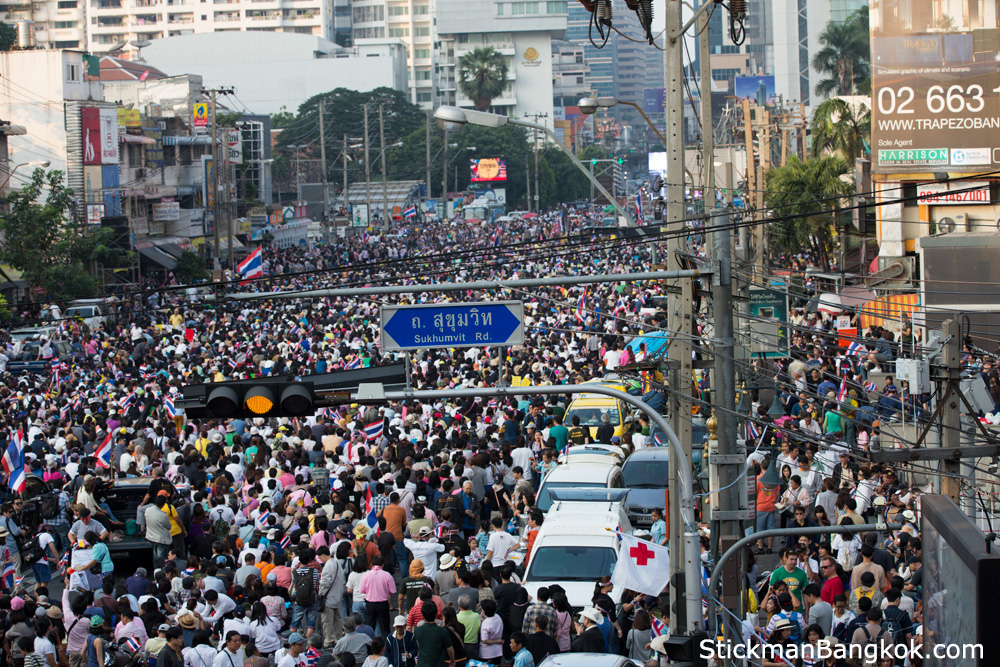 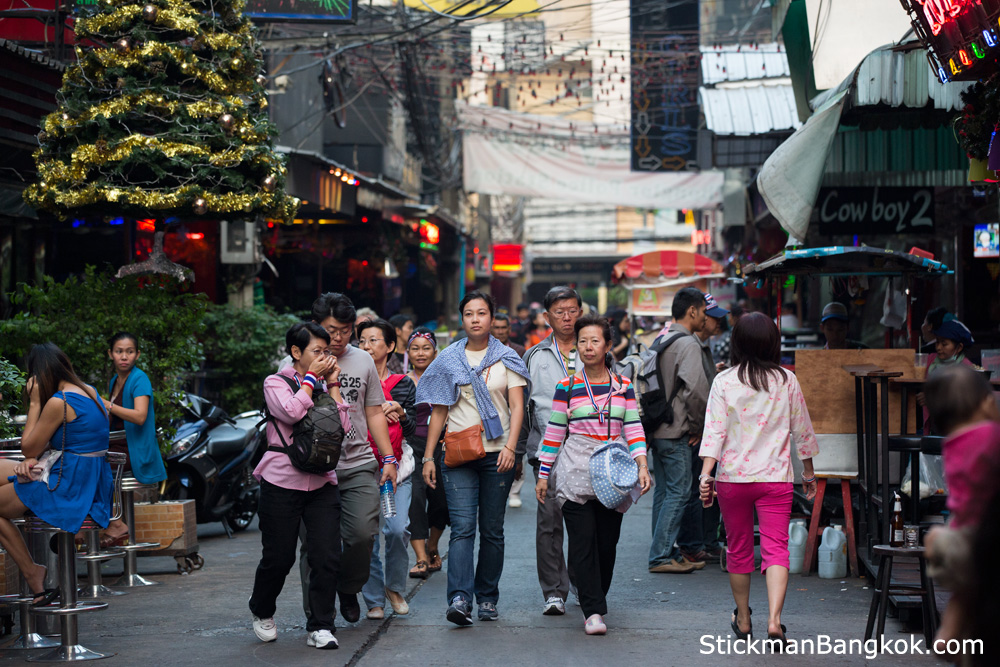 Protesters stride along Soi Cowboy, probably the only time they have ever done that! 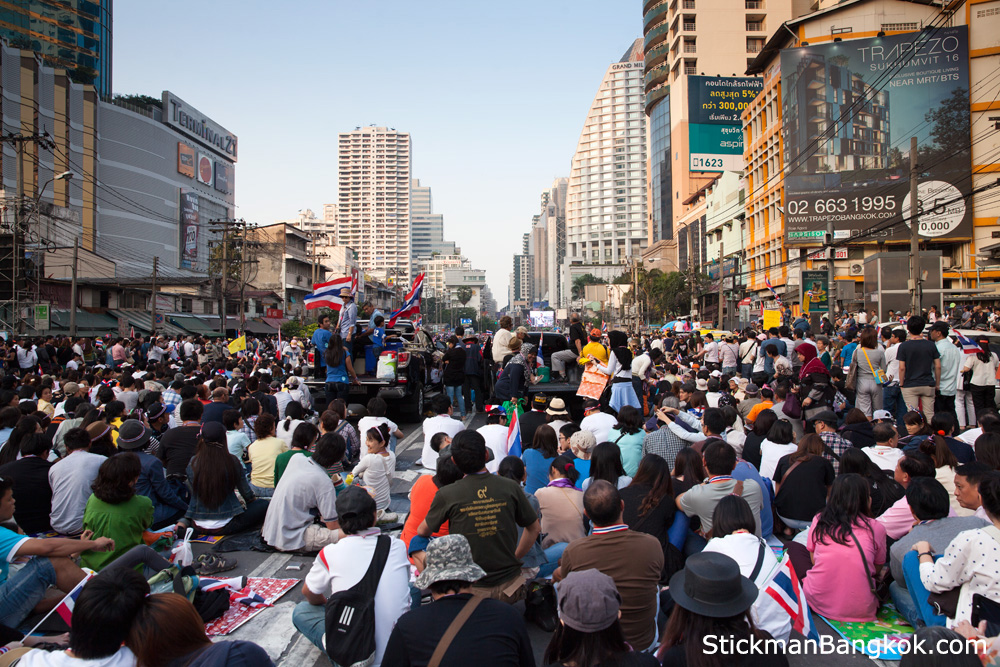 This was the view from below the skytrain tracks, looking north, up Rachadapisek Road.

The Bangkok Shutdown By Day