* All photos in this report were taken on the evening of Saturday May 15.

As skirmishes and mini battles take place all around the so-called red zone – those parts of the downtown area that remain under the reds' control – the police and army presence has been increased at strategic points so that the reds cannot extend
the territory they control further. The Nana area, so familiar to Western visitors, particularly those with an interest in the city's famed nightlife, is currently being protected not by the police, but by fully armed troops from Thailand's
military.

Tonight I went for a stroll along Sukhumvit Road, starting at Emporium and walking up as far as the expressway fly over which marks the end of Sukhumvit and the start of Ploenchit Road. 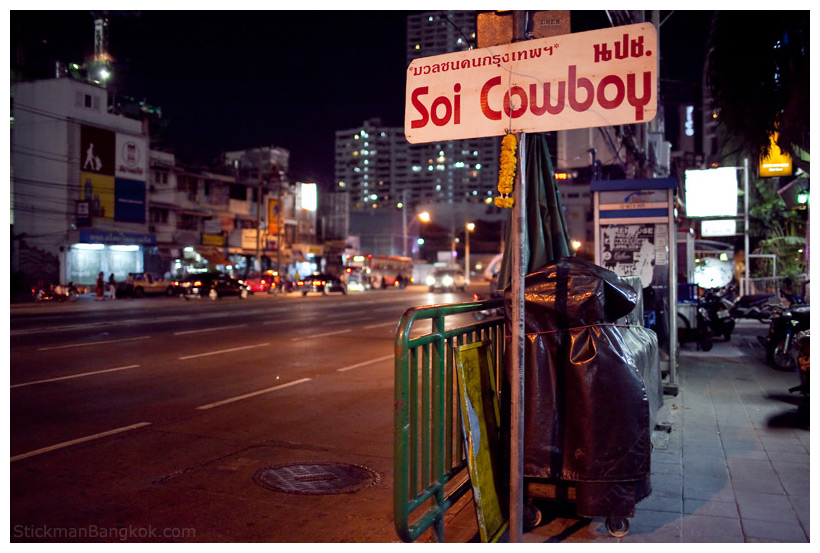 I dropped in at Soi Cowboy on the way up for a quick water, a bargain at 30 baht in Tilac, still Cowboy's best bar.

From Emporium up to Asoke there was not even a hint that anything was amiss. Old boy street vendors stare at you with toothy grins as you walk by. Prettied up office girls make their way home after slaving through their 6th day of the week. And with the
sun going down, skimpily dressed tan-skinned girls from the northeast jump off their boyfriend's motorbike and head down soi 23 for another night at the office. You could be forgiven for thinking everything was fine and dandy
and it was just another Saturday night in Bangkok…

The first signs that something was up were around soi 19 where a few soldiers were stationed on the median barrier, the sight of armed soldiers in any downtown area seldom a welcome sight. 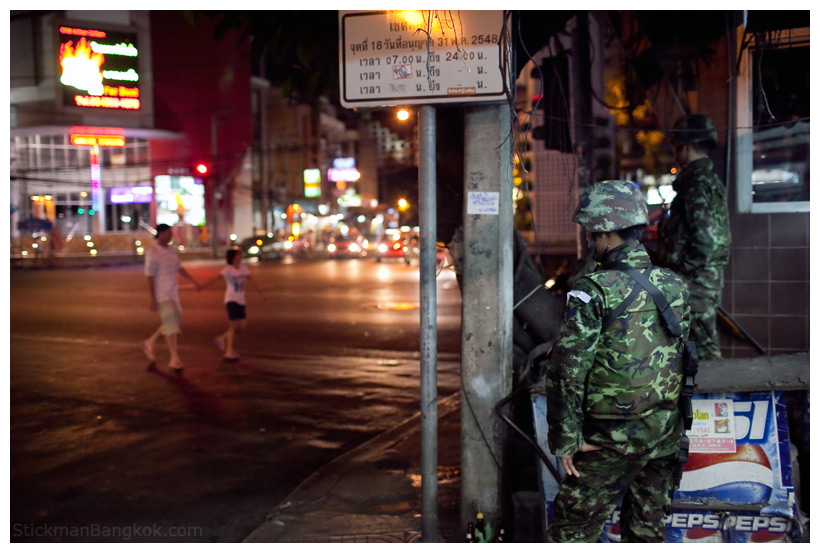 As I proceeded beyond Asoke, along the dark, uneven section of pavement outside Chuwit Park and towards the Nana neighbourhood, it was obvious that the troops' presence and the threat posed by the red shirts just a few hundred metres away had had
an effect. A number of businesses in the Nana area were closed.

Around soi 8 it seemed business as usual but once I was clear of the Nana BTS station it was obvious that many shops in the block between sois 3/1 and 5 had closed, including the Bookazine and Starbucks branches. The entire Nana Square shopping centre
was closed. The Landmark Hotel has erected a wrought iron fence around the front of the hotel, a really bad look which makes those eating out front on its wonderful terrace look like they are death row inmates enjoying their last meal. 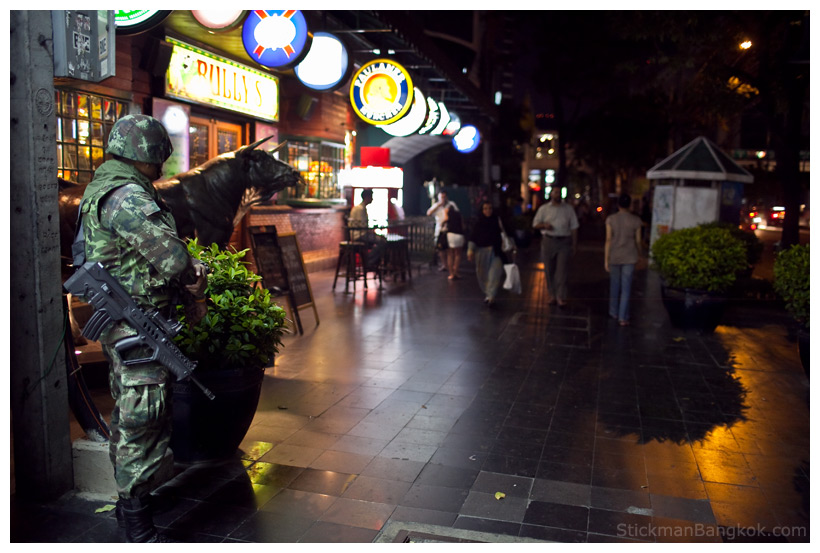 From the area around Bully's, adjacent to the JW Marriott, the number of troops became greater and greater. Troops walked by briskly in small groups, on the move to new locations, perhaps to bolster the front lines. Troops controlled the police booth
at the Nana intersection and there was even one fellow standing in a phone booth. One has to wonder whether that would restrict his ability to use his gun and any other equipment. I am sure the phone booth manoeuvre is not in most army manuals.

There are large movable barriers outside the Marriot Hotel which had a large (private?) security force out front who were very closely monitoring every little thing going on. 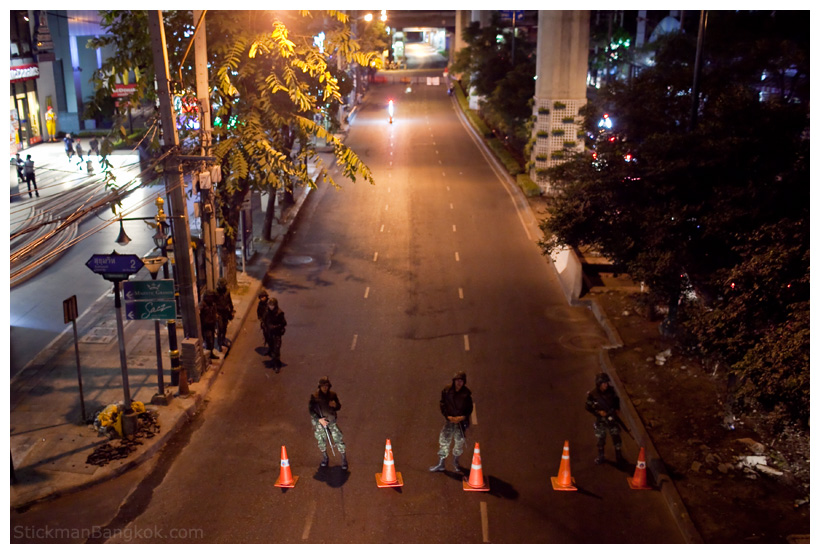 Many of the familiar street vendors were absent. Passers by varied in their reactions to everything that was going on around them, from total ambivalence to amusement. No-one seemed to be greatly concerned, interesting given that just 48 hours earlier
bombs / grenades had gone off in this very area. They say ignorance is bliss.

Soldiers lined up across the main Sukhumvit Road at soi 2. Traffic that wished to proceed beyond Sukhumvit soi 2 appeared to have to have a reason to proceed with many vehicles which had come up Sukhumvit Road doing a U-turn at the Nana intersection and
going back the way they had come. Most taxis were displayed the red available sign suggesting that tonight was not a night that Bangkokians were going out in large numbers. 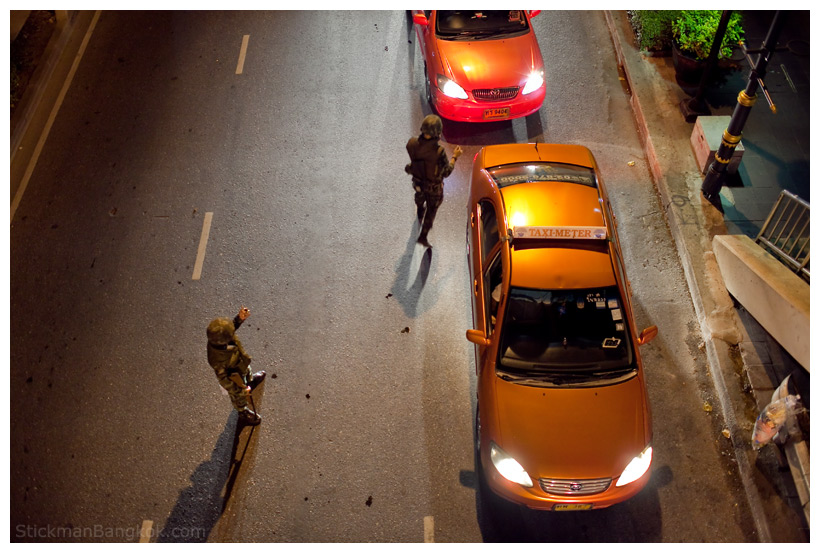 Soldiers were making thorough checks of all vehicles, two soldiers per vehicle. In the case of cars and taxis they removed most everything from the vehicle's rear and examined it closely. With motorbikes any parcels had to be presented and unpacked
for inspection. This was not the cursory check made by security guards when you enter an underground station or some upmarket Bangkok shopping malls. Even passengers were asked to get out of the vehicle and seemed to be asked a question or two,
all of which made me wonder how the soldiers – who it has to be said are going about their duties in a most professional manner – coped with communicating with foreigners. For the most part the soldiers seemed to be of a lower rank and I am sure
English is not a perquisite to get into the Thai army! 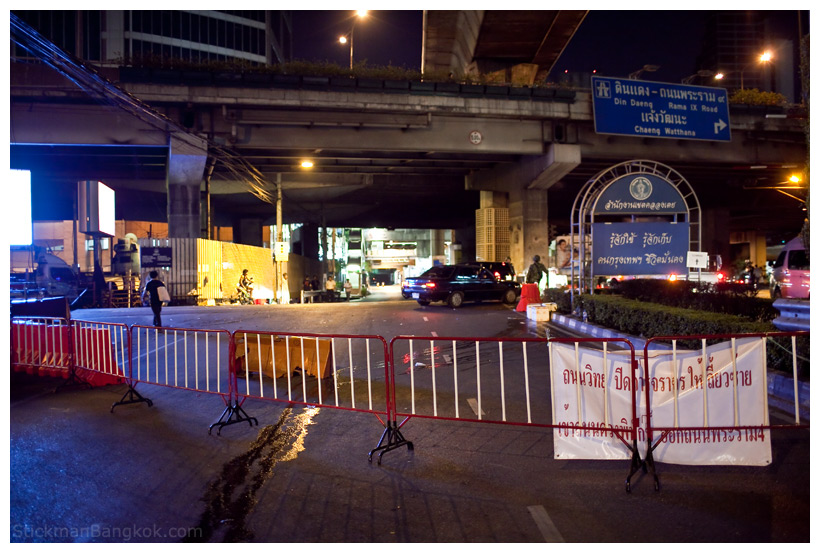 I couldn't help but feel that the soldiers in the Nana area were less relaxed than I had seen troops in other areas in recent times. Whether this was because they were genuinely concerned about the red shirts making a move on the area or some completely
different reason I would not know. 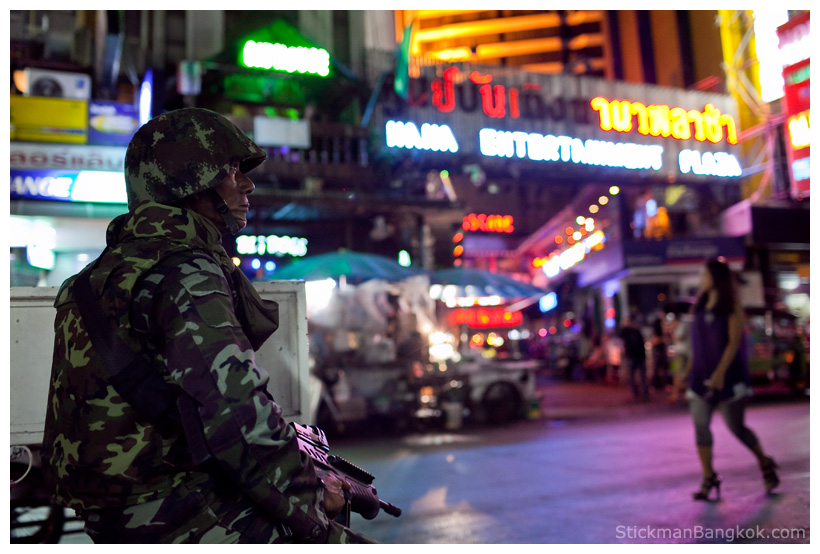 Down on soi 4 there were much nerves. I stopped by just one bar for a quiet drink when one of the senior staff came up to me and told me – and the few other customers present – to go home. She said she'd heard that the Lumpini Police Station had
just been bombed and Nana Plaza would close. It was of course a case of Chinese whispers and the police station had not been bombed – but the policemen's residence hear by had been attacked. Nana was not to close, at least not just that early.

The temple of Nana is currently safely under the guard of the fine troops of the Thai army. A are sitting opposite at the entrance to the Nana Hotel, sharing the area with a few scantily clad ladies who seem most delighted at their presence. These troops
provide the last line of defence should the area be invaded by red shirts. But in many ways it's a red stronghold already, not because it's a red light area, but because the vast majority of the girls come from the Isaan region, home
to a good number of the red shirts.

With business at Patpong heavily affected by the battles in the area, and Nana now under guard, Soi Cowboy remains the only major farang nightlife venue in Bangkok free of security forces….for now.