Throughout the reds' protest I've been making the walk from my condo to the Silom / Narathiwat intersection, up Silom to Rama 4 Road, across the intersection at the point that was ground zero for a while, and up Rajadamri Road, all the way to
Rajaprasong. I wanted to make the same walk today…

…but I was prevented from doing so. At the intersection where Rajadamri and Sarasin Road meet, on the northern side of Lumpini Park, I was told by soldiers that I could not proceed. Despite pleading to be a member of the press and promising
to write nice things – ok, the first part was a lie but the second part was absolutely genuine – they maintained the professionalism I have previously noted of the Thai military right throughout this conflict and they turned me away.
I had hoped to get photos of Central World in ruins and of the Rajaprasong area as a whole but alas, I could not get that close. 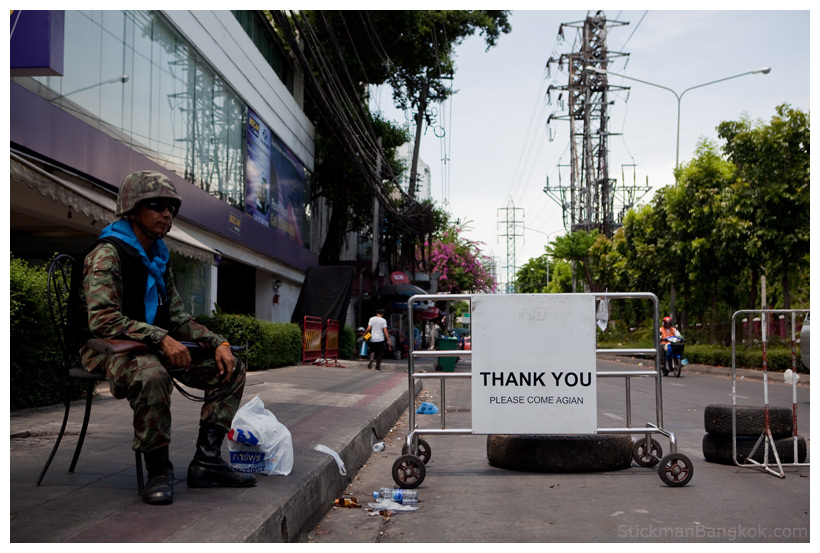 It's two days since the reds gave up their occupation of the Rajaprasong area, two forced early nights in with curfew remaining in Bangkok and we're now well into the third day of cleaning the mess up. Soldiers still patrol Silom Road, riot
police too. The numbers aren't what they were but there are enough security forces present flashing enough impressive-looking hardware to remind you that a threat remains, or at the very least is perceived to still be out there.

Silom is slowly coming back to life. Some street vendors have set back up, the odd 7 Eleven is open and while most expat pubs in the area remain closed, the Duke of Wellington was open for business and welcoming customers this afternoon.
With that said, there was hardly anyone there. Traffic on Silom was being stopped by soldiers at checkpoints, drivers asked about their business in the area. 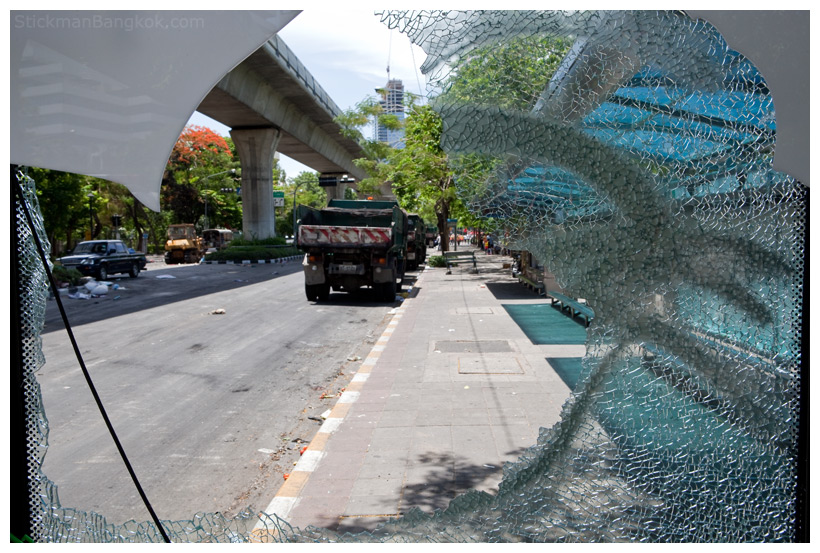 The southern end of Rajadamri Road, of where I featured many photos in the last update, has largely been cleaned up. In that area there are no remnants of Fortress Dang, no tyres and none of the bamboo barricades.

The rubbish in the area from rotting food to discarded clothes to the various parts of tents and people's makeshift houses have all been removed. When you see that part of Rajadamri you start to wonder why the roads have not reopened…until you
get just a bit further up the road. 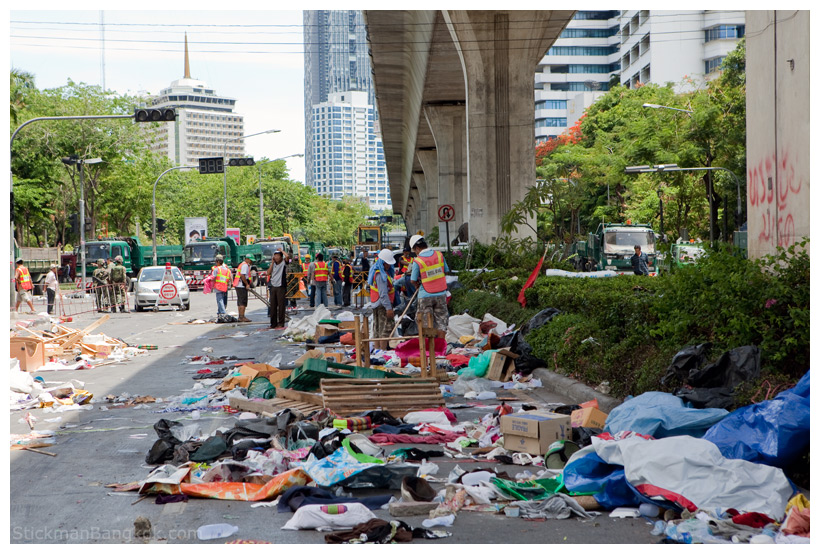 You don't get very far up Rajadamri Road to see that there is still a huge amount of crap to be cleaned up. In some areas it has been swept into huge piles, in others it is still strewn everywhere.

Remnants of the occupation remain, nothing more telling than the two distinctive songtaews from Chiang Mai parked near the Rajadamri / Sarasin intersection, windscreens smashed, most likely by those anti the red shirt movement some time
after the reds had scattered. No doubt the source of a family's livelihood which was left behind as the owners fled, it shows that some of the protesters really did put everything on the line.

The mind boggles at the reds were able to get such a huge amount of stuff into the area – and given the numbers that were protesting at their peak, just the daily food supplies must have been massive. I don't think it would be exaggerating
to say that there are thousands and thousands of tones of crap that are slowly being sorted through, cleaned up and taken away. 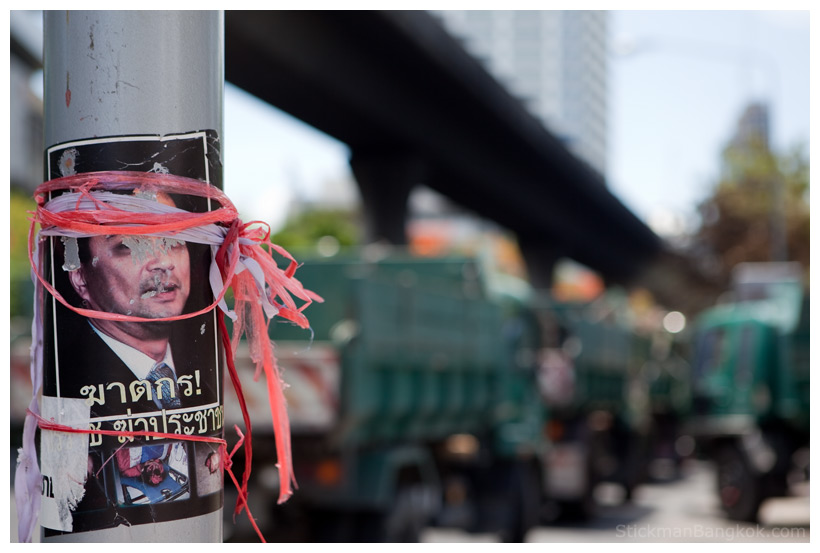 In the Rajadamri area, at least southern Rajadamri, there's not a huge amount of damage been done to the area. There is much graffiti with coarse words in the local lingo, most of which curses Prime Minister Apisit. Images of his face are plastered
all over the place along with crass words slogans. It looks as if the graffiti clean up is low on the workers' priority list for it seems to remain.

Cranes erect what I assume are engineers who examine the pillars and underside of the skytrain up and down Rajadamri Road. Given the efforts by the red to cause damage to infrastructure, despite things looking ok to the untrained eye they
seem to be going about a thorough examination of every inch.

The soldiers who turned me away from proceeding on Rajadamri tried to convince me that the Rajaprasong area was not safe and red shirt snipers may remain in the area. I very much doubt it although I would not be surprised if the area was
being worked through by bomb squads. 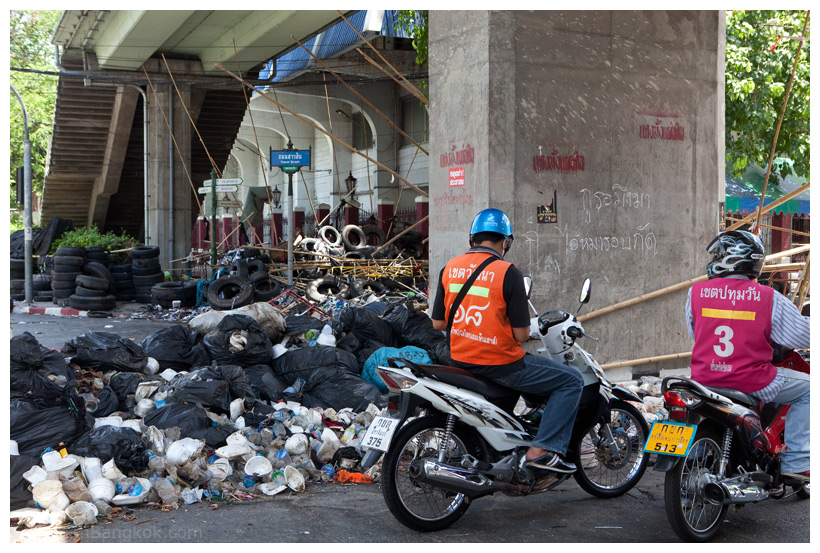 There's little damage along Sarasin Road, seemed to be none done to the venues along there such as Brown Sugar, and neither was there any major damage that I could see on Wittayu Road (also refereed to as Wireless Road as Wittayu translates as "wireless").
The remains of the barricade at the Sarasin and Wittayu Road intersection is largely still in place. 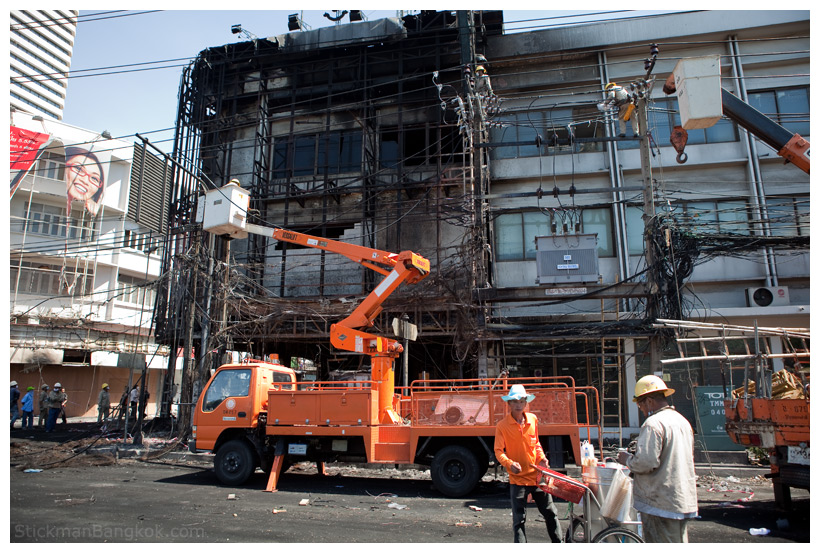 I had to make my way through back streets and side sois as soldiers are preventing anyone from using the southern part of Wittayu Road. I came out in the Bon Gai area, the part of Rama 4 Road where the biggest fires had been set. The Lotus Express store
plus a bank have been totally destroyed and there is much damage to the road. 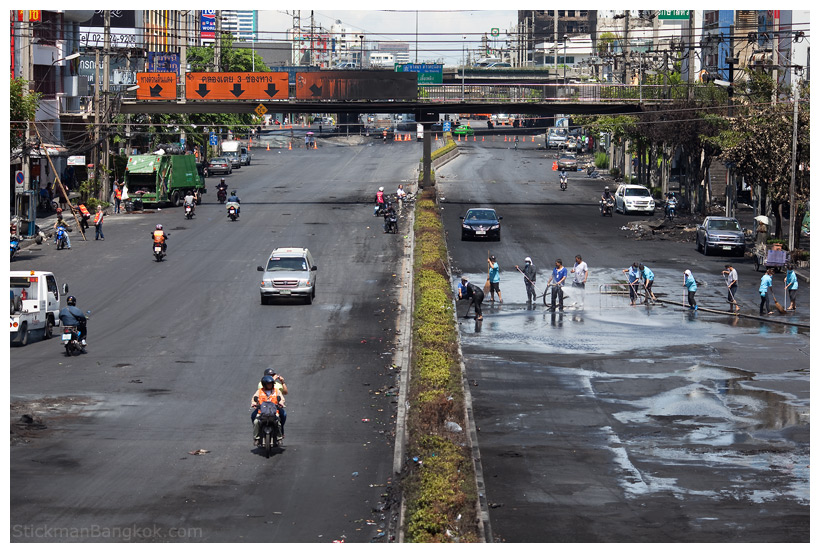 Bangkok feels much safer and the presence of soldiers and police at what were the major flashpoints as well as some of the more strategically important roads and intersections has done much for the confidence of Bangkok's citizens. 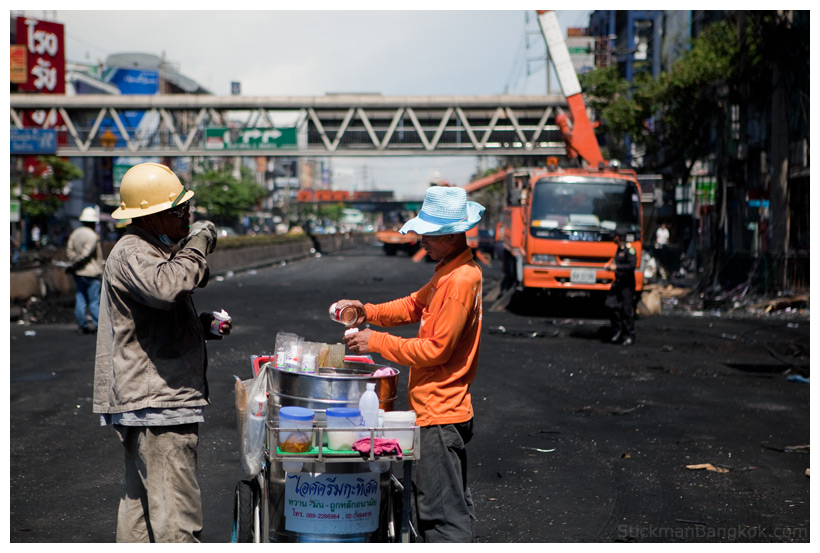 The big question on everyone's mind is just when Bangkok will return to normal. A sense of calm has returned to the city, the concern many had that there would be random outbreaks violence by rogue red shirt militia groups has largely been allayed.
It seems that the curfew now is more abut caution, perhaps giving the authorities a chance to get work done in certain areas without being interrupted by the public. 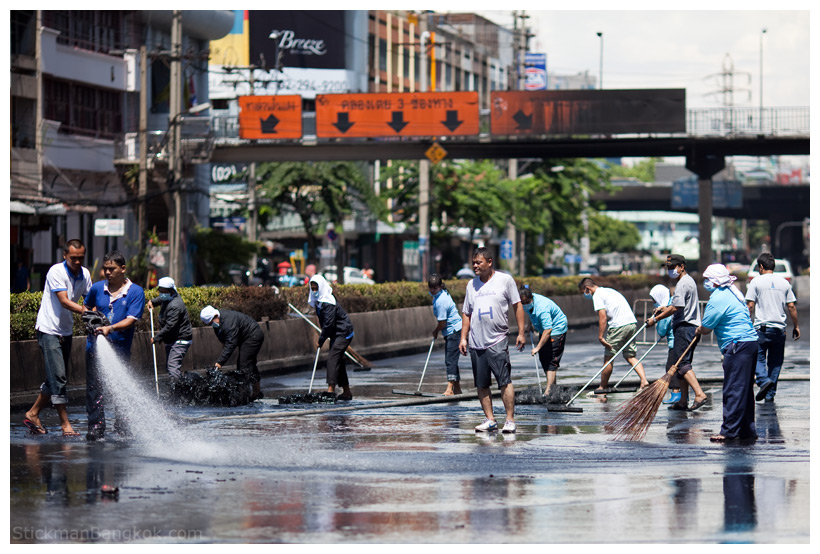 The clean up looks to me as if it will take at least a couple more days (after today) and it's hard to see everything reopening until Monday at the very earliest. Even then, that might be a little on the optimistic side. The authorities seem to be
very measured in what they're doing, not rushing, being thorough and covering all bases. Some buildings, like the bank on the corner of Soi Ngam Duplee and Rama 4 Road looks to me like it could come down and with Rama 4 Road being one of
the busiest main thoroughfares in all of Bangkok, it obviously needs to be dealt with. 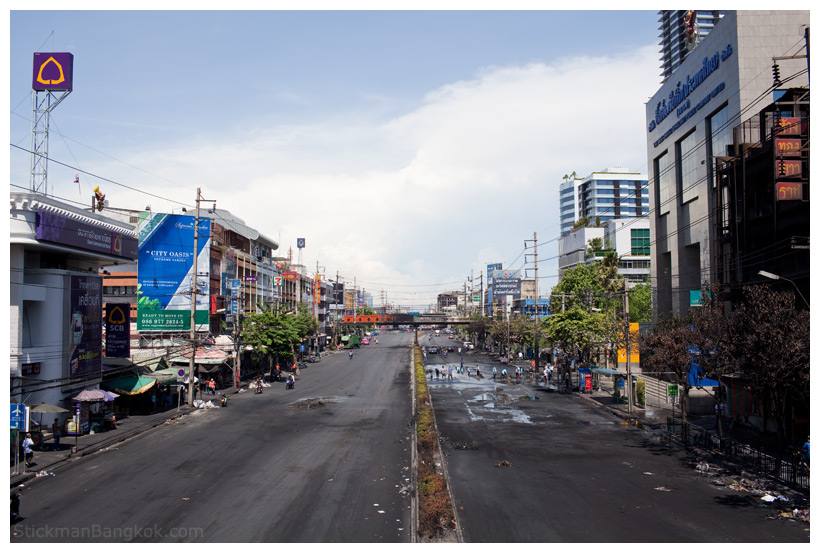 Whether it's ok to visit Bangkok now becomes very much a personal question. I don't think there is a real issue of danger now, but there is most definitely still one of inconvenience. The curfew is expected to last two more nights, tonight and
tomorrow and I am guessing that the authorities are rushing to get roads and the skytrain and MRT reopened as soon as possible. They both remain out of service for the time being. If you have tickets to fly into Bangkok today or tomorrow and you
plan to spend time in the capital, I would consider delaying a day or two. Beyond that I am hopeful that things will return to normal.