I desperately wanted to go and photograph the action today as the security forces finally made a move on the red shirts' encampment, but a gut feeling told me that it would be a bad idea. And so it turned out to be the right decision,
with a number of Western journalists shot, one Italian killed…

Just hours after the security forces moved in on the red shirts' occupation area, a mission that the government announced as being successful, repelling the reds and forcing some of their leadership to surrender to police (a few others ran and remain
on the run), the big clean up began. 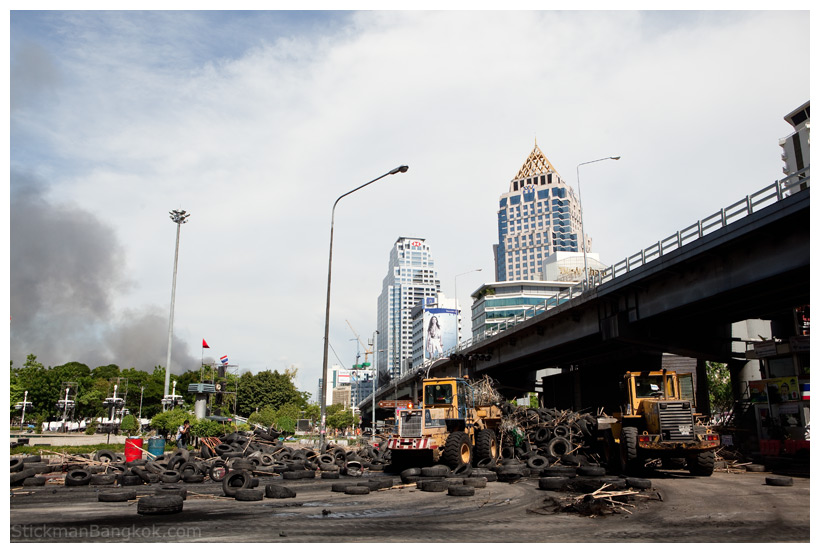 City officials sent in bulldozers and dump trucks and the bottom part of Rajadamri Road, the iconic location where the barricades first went up and from where grenades were launched against the Sala Daeng station, saw the clean up begin….to the backdrop
of Bangkok burning, literally and metaphorically. 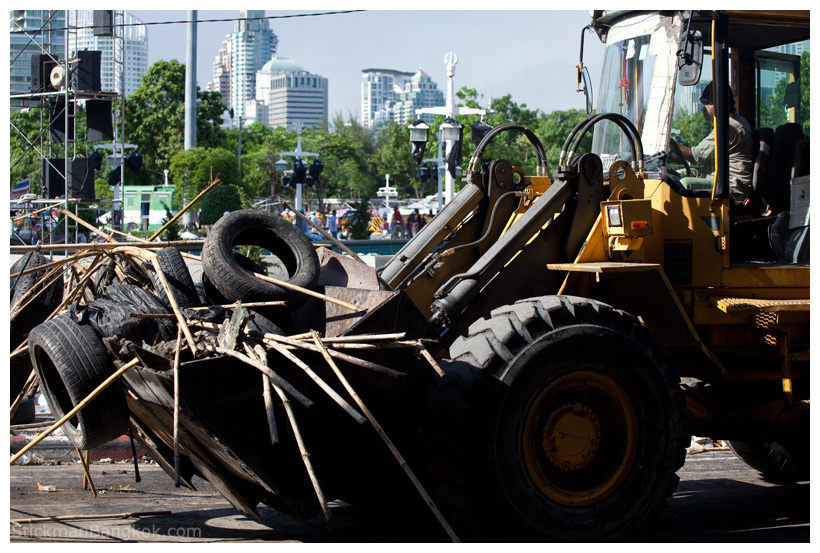 A queue of dump trucks lined up along Rama 4 Road, eager to help clean up and get the area back to something resembling normal as soon as possible. Red shirt tents were dismantled by teams of city officials and bomb squad members roamed
around, looking for bombs and other booby traps. Teams of city workers dismantled everything, pushing the junk into piles which was loaded on to the dump trucks and taken away to its graveyard. 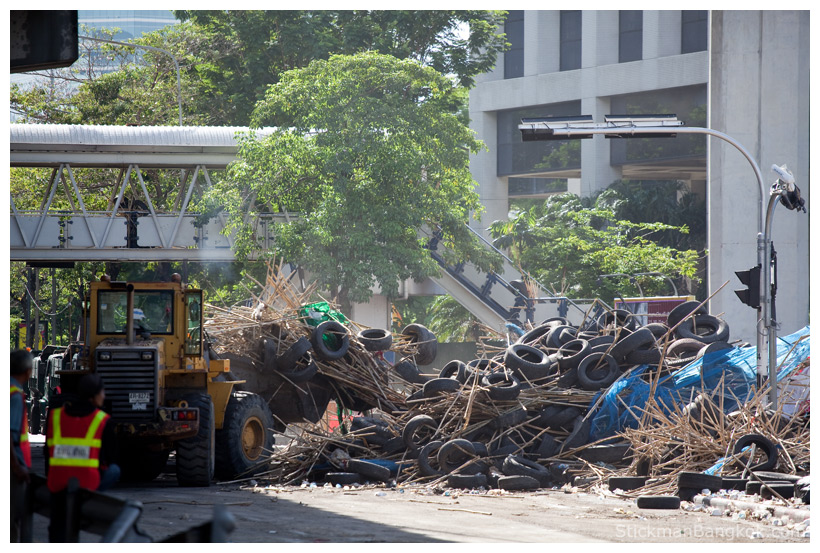 The area is a real mess. I didn't venture too far, sticking to the southern end of Rajadamri Road, where the reds' fortress, what I nicknamed Fortress Dang, was first set up. If you've followed my coverage, the photos in this update correlate
to where I have spent most of my time covering the protest and where I have taken most of the photographs I have run. 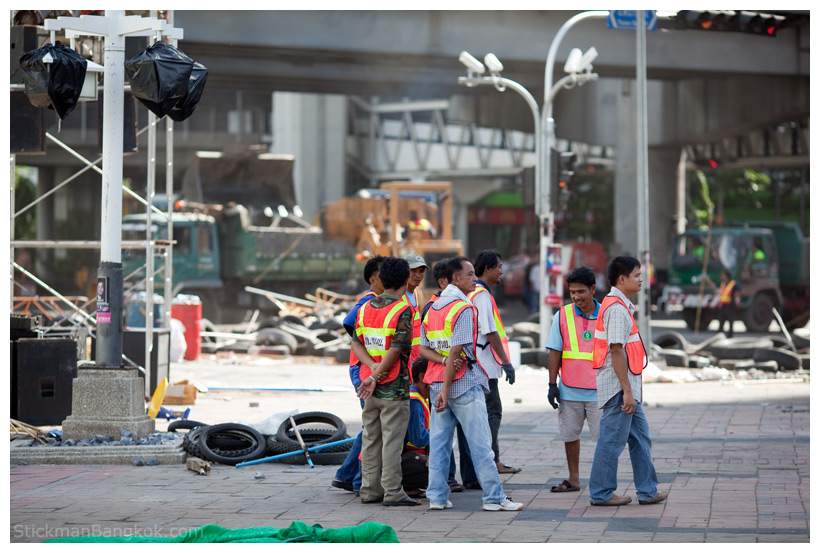 The area is strewn with of rubble, rubbish and the remnants of many fires. Birds and flies gravitate around piles of food and parts of the area absolutely stink.

From all accounts, when the reds realised that this really was it, they set off fires all over the place as they evacuated – just as they had threatened they would. 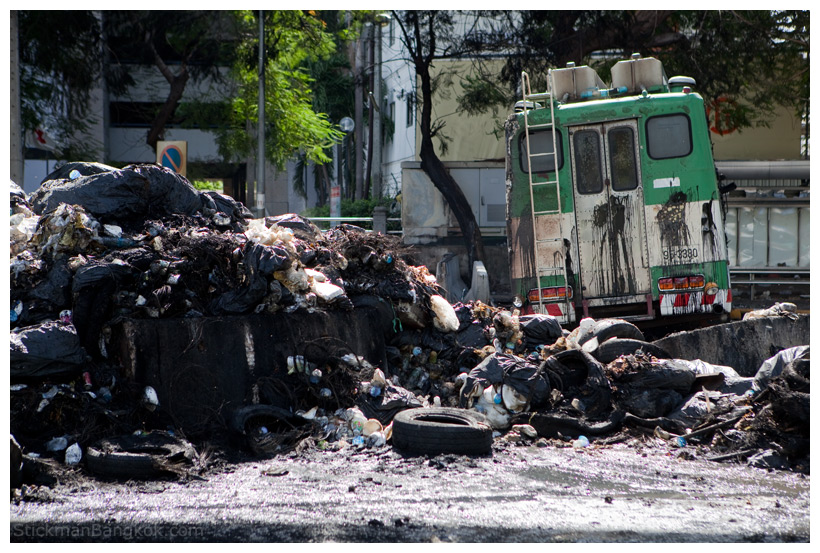 There must have been a huge fire right below the skytrain at the southern end of Rajadamri Road and as the photo below shows, the entire underside of the skytrain track / support structure is tinged black, suggesting the flames were more than a dozen
metres high. 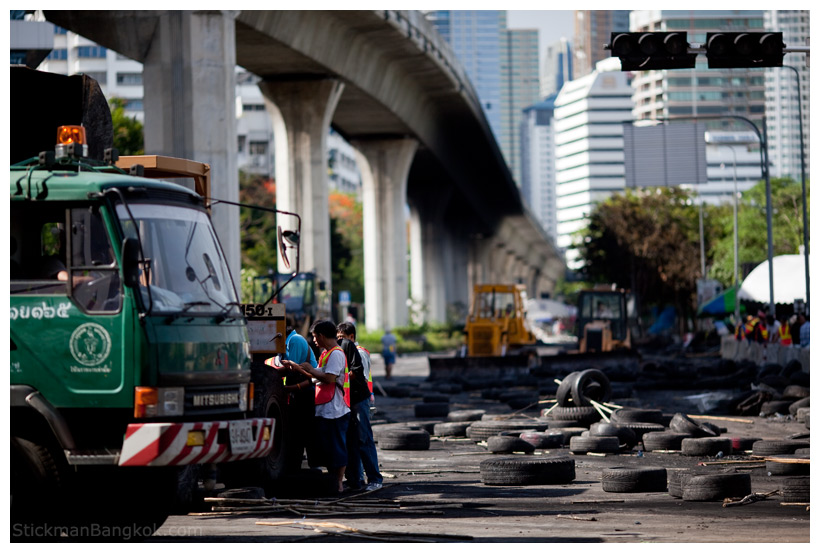 All along Rajadamri Road is a mess, advertising signs smashed, phone booths destroyed, bus stops burned, plastic melted and morphed into entirely new shapes and the remains of Molotov cocktails, the tops of bottles with a strip of material, are everywhere.
Burned diesel is all over the ground and broken glass litters the area. 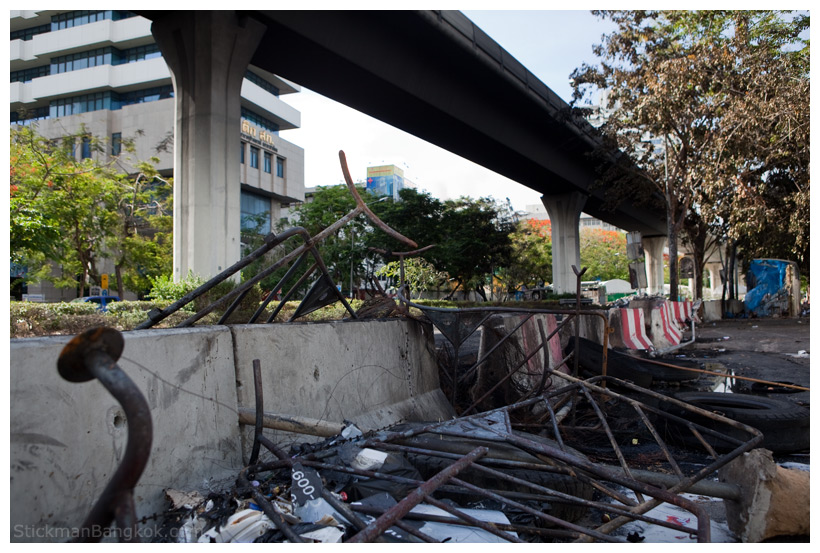 Convenience stores closed some time between 4:30 and 6:00 PM after there was a run on many products – large bottles of water, packet noodles and cans of tuna being the hot sellers. All of the 7 Eleven branches in my neighbourhood have newspaper taped
up over of the windows from the inside, preventing anyone from seeing inside. Supermarkets in the area where I live closed around the same time. I imagine it was much the same all over the city. There wasn't a panic, but there was a run on
goods, something I have not seen before.

Fires are burning around the city, as reports come in of red shirt supporters running riot. One senior policeman has said that looters and rioters will be shot on sight. 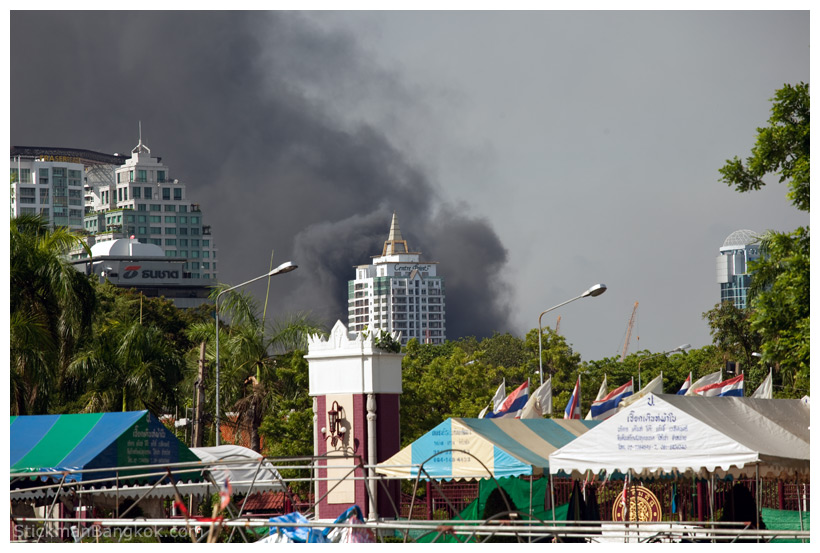 A curfew has been imposed in Bangkok and 20 odd other provinces from 8 PM until 6 AM. No-one is allowed outside during this time. Foreigners who need to get to the airport will find themselves passing through checkpoints and be required to show their
passport and air tickets.

It has been announced that ATM machines will not dispense money during the hours of the curfew, from 8 PM until 6 AM.

The curfew includes Pattaya where ALL bars have been ordered closed. This is not confined to Bangkok only! The curfew has been announced for tonight, but whether it will continue for a few days or not, we don't yet know.

I think it is fair to say that people aren't yet scared – but are very, very concerned. Rogue red shirt supporters, the radicals and the hardcore, are roaming around the city torching shops, shopping centres, buildings and landmarks
that may (or may not) have connections to the establishment. They seem to be doing so with impunity, something many Bangkokians are very angry about. Policemen seem to stand by as red shirts pile out of a pick up truck, attack an area,
and drive away.

Reports have it that Central World Plaza is ablaze – just as the reds promised to do if the occupation area came under attack. With numerous fires burning all over the city, burning rubber can be smelled as far away as Nonthaburi. 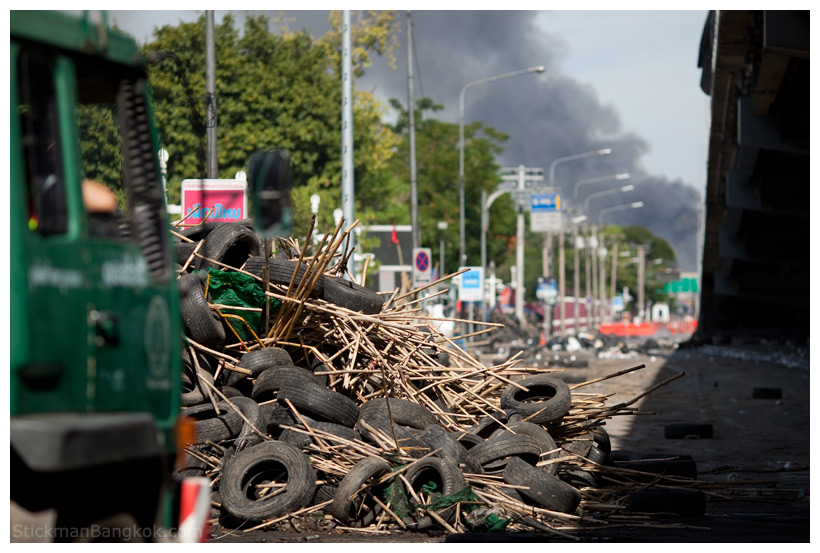 There's a real feeling of lawlessness. As we lock our doors tonight, we move to the balcony of our condo, or the porch of our house, and we look to the sky and see plumes of smoke against a dark sky, the sounds of distant, or perhaps not so distant
sirens. We're helpless, unable to do anything, frustrated at being locked up, yet there is a feeling of inevitability at where we have arrived. Many of us always thought it would come to this. And many of us think it could very well get worse. 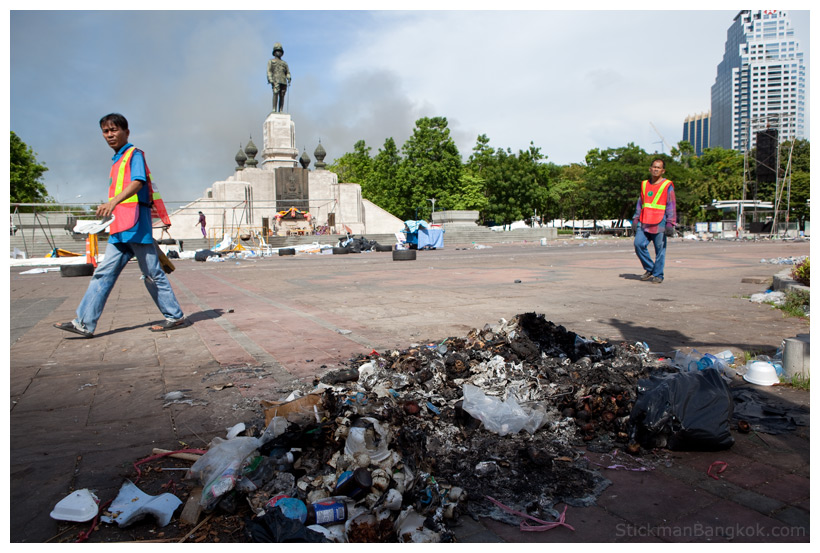 Everyone is wondering what will happen next. We've had reports of protests and destruction of government property in the red shirt strongholds of Udon Thani and Khon Kaen and the assembly of red shirt groups around the country, furious that the main
red shirt occupation area came under fire.

What happens in the next 24 hours is perhaps even more important than what happened in the last. With looting and rioting occurring, I am of the belief that the authorities need to act firmly and decisively. Failure to do so will only embolden those who
are reeking havoc on the city.

So much blood has been spilled. For Thailand to move ahead and achieve some sort of reconciliation is going to be immensely difficult…

As a final note, if you have plans to visit Thailand in the next few days, you should seriously reconsider. Things are very much up in the air at the moment and no-one can be sure what will happen next. If you had plans to come to Bangkok in the next
few days, well, I wouldn't. I really wouldn't! I would not come here unless you live here / have a home and / or family here. Here's hoping that peace is restored soon.