Is Bangkok back to normal? Have things returned to the way they were before the red shirts began their occupation of downtown Bangkok, way back before Songkran? Are soldiers and police still patrolling the city's streets?

I went for a stroll through the inner city areas where the protests took place today to see whether Bangkok has returned to normal, and also to see if the police and army presence remains. 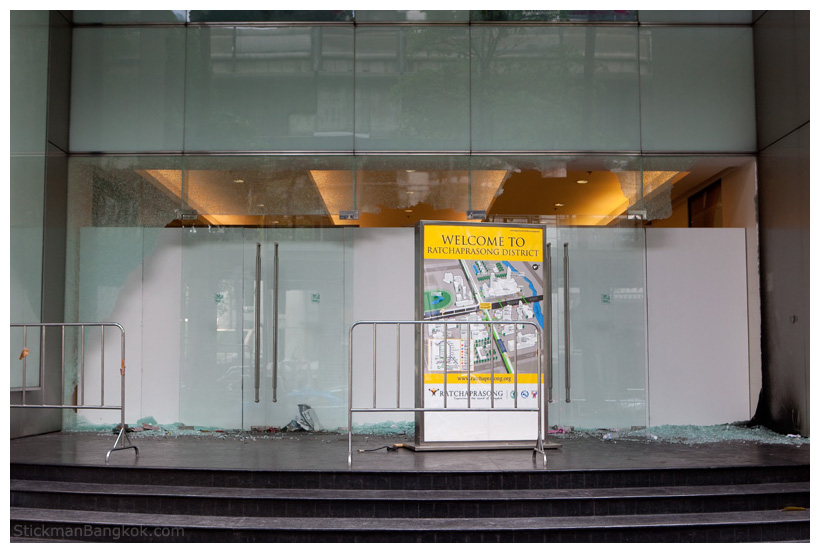 There is no sign whatsoever of the security forces in the Silom Road area. Walking up Silom Road this morning I did not spot a single soldier, policeman, military vehicle, any of the razor wire that had been a fixture for weeks or for that matter, any evidence whatsoever that the commercial district had been over-run by security forces for the past month. They have seemingly vanished!

The Silom Road and the main commercial district feels as if it is back to normal – and fortunately it escaped any long-term physical damage. The expat pubs are open again. Street vendors line the streets. Foot traffic levels suggested that staff are back at work and of course the skytrain and underground are back in service. Even the overhead footbridge connecting the Sala Daeng BTS station with the Silom MRT station is free of soldiers! 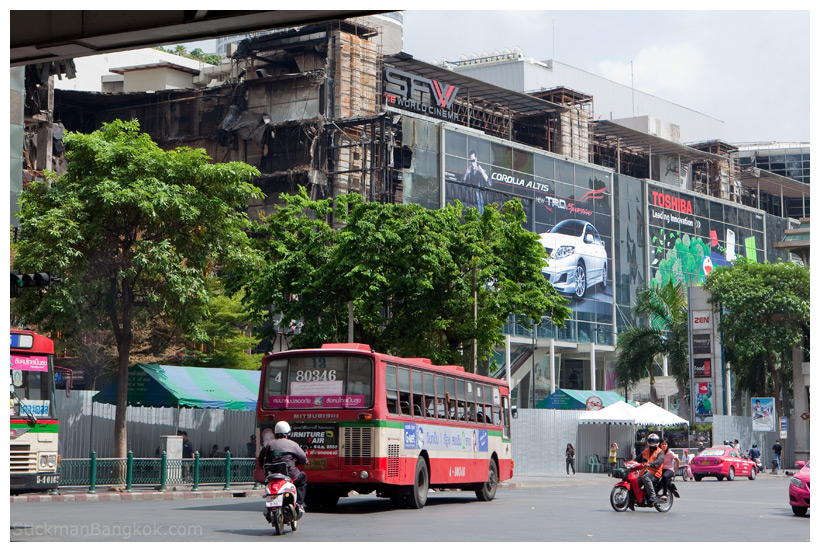 Walking up Rajadamri Road, the area has been cleaned, little evidence remains of the red shirts' 6-week occupation. Outside the Grand Hyatt Erawan staff are painting over graffiti and nonsense ramblings left by the red shirts which were, funnily enough, written with red paint.

Up at the busy and now iconic Rajaprasong intersection, all roads are open and traffic is flowing – or at least moving at the pace would expect it to in a city renowned for terrible traffic jams.

Much of the graffiti, crude slogans and surface damage to the area has been cleaned up and repaired. The city organised a massive clean up operation on Sunday and thousands of Bangkokians poured in to the area to volunteer to help with the clean up.

There are small groups of police stationed outside Gaysorn Plaza which remains closed. Some of the large glass entrances at Gaysorn have been vandalised, as have some of the windows and advertisements around the outside. Perhaps there is damage inside too?

There's also a police presence outside Central World with a dozen or so dozing policemen stationed under a tent, escaping the summer sun. A few armed soldiers can be seen inside the fence which runs all the way around Central World.

But not quite everything is back to normal… 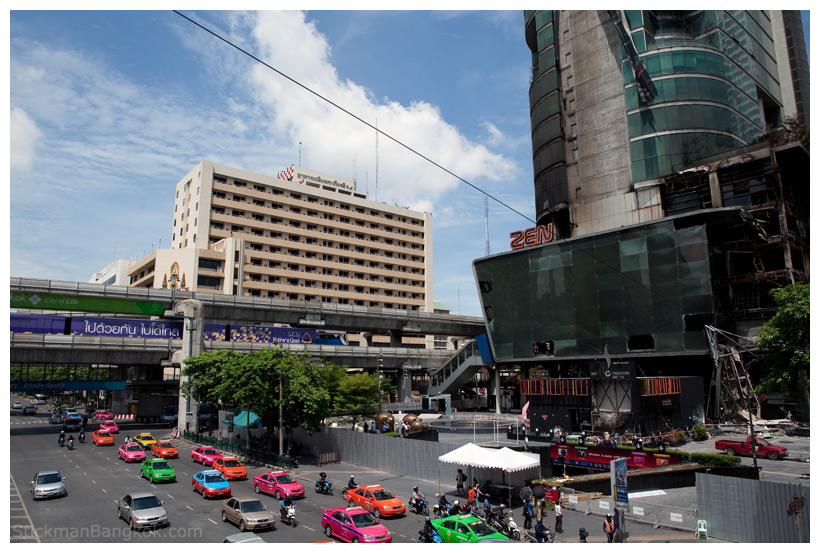 Central World really is a sorry sight. The damage to the mammoth shopping centre is extreme at the southern end, that's where Zen department store was, the end adjacent to the skytrain and opposite the Police Hospital. That was the part closest to the main stage and protest area of the red shirts and where it seems most of the fires were set. At the northern end, where Isetan department store is, or you could say the Pratunam Market end, there doesn't seem to be any visible damage, at least from the outside.

Above Zen department store is a large tower which rises ten stories above the rest of Central World. With the damage sustained below it is extremely lucky that it did not come crashing down, for if it had it may very well have come down on the skytrain tracks, causing the sort of damage that could have put this critical component of Bangkok's fragile transport infrastructure out of service for months. 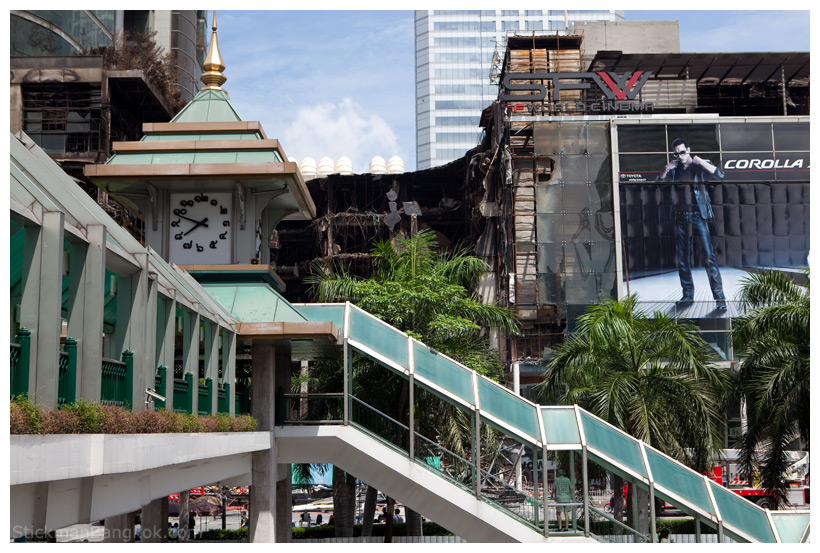 A large part of Central World has collapsed and is open for all to view, the view not dissimilar to a body on which an autopsy is being performed, open for all the world to see. Visiting the area with an American friend, he said that it's all a very eerie reminder of 9/11. 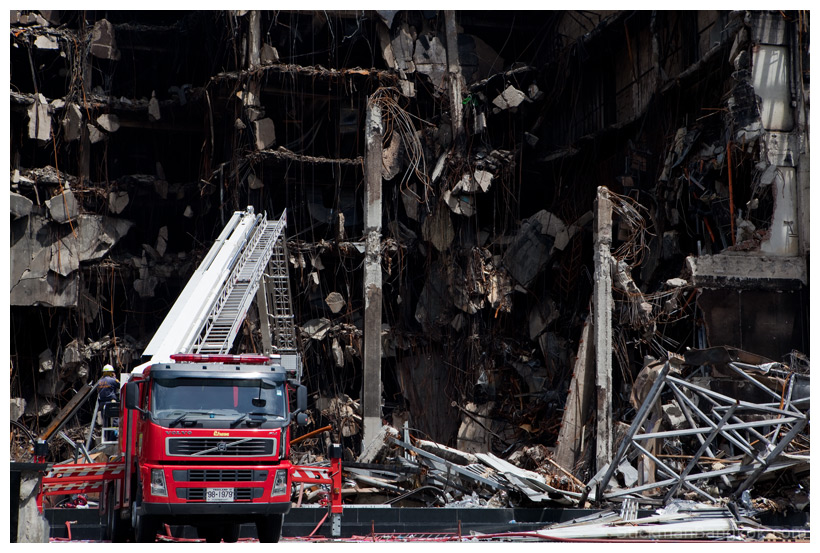 While a fence has been erected around the entire mall, there's a small opening in the front, almost like a viewing area, where you can get a reasonably close look of the part of the mall with the worst damage.

Visitors mingle, almost awkward, strangers engage in conversation, sharing memories of times spent in one of the city's most popular shopping malls. 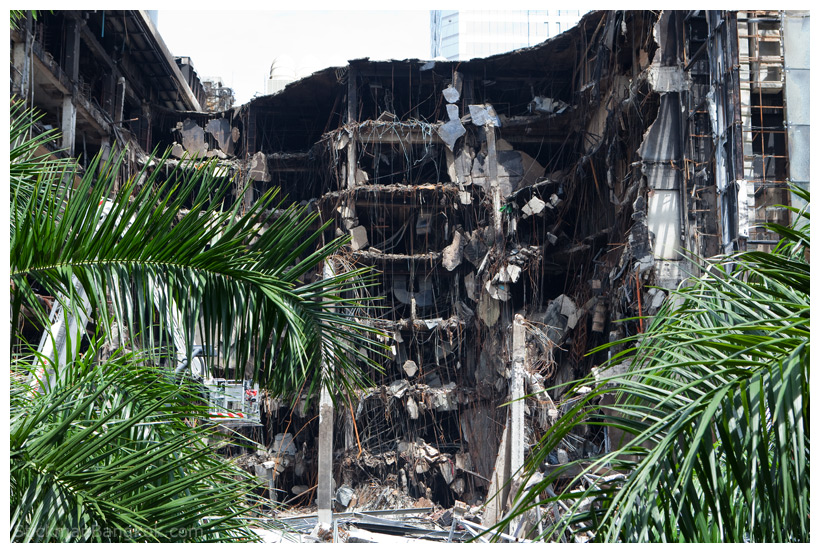 Central World was never supposed to look like this.

Opposite Central World, the Big C shopping centre is also fenced off. It isn't clear how bad the damage is but it doesn't seem to be nearly as bad as that at Central World, at least on the outside.

On Rama 1 Road, I felt a real sadness peering into charred remains of what was once the foyer of the Siam Cinema. Way back in May 1998, it the first cinema I caught a movie in after I had moved into my first Bangkok apartment. The Siam Cinema was walking distance from home and I distinctly remember thinking how ridiculously cheap it was for a ticket, just 60 baht. 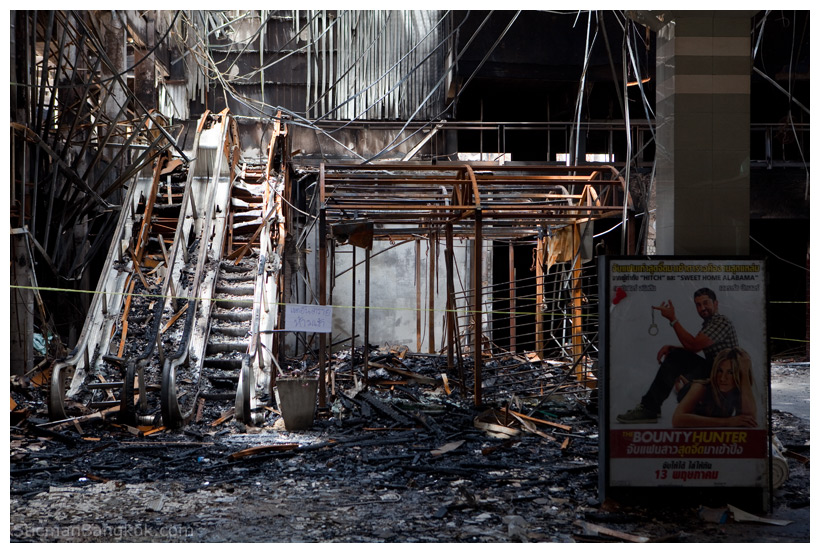 Like Scala and Lido, the other old style cinemas in the Siam Square area, these movie houses are a throwback to the days of real cinema. Advertisements before the flick were in the form of old-fashioned slides, manually changed by the projectionist. The staff wore old-fashioned uniforms and the signs, decoration and architecture date back two generations. There was a real feeling of history, and of nostalgia. I don't doubt that the staff had been there for a generation or two too. Most were in their 50s or 60s and they took a great pride in their job.

Siam Cinema's popcorn was famous, 30 baht got you a decent sized helping – although if you took your teeruk, one portion just wasn't enough.

Siam Cinema was entertaining its third generation of moviegoers and for those like me who can be a little old-fashioned when it comes to movie going, preferring a real movie house to the generic multiplexes that are all the rage these days, the torching of Siam Cinema is not just a massive loss to movie goers, but to Thailand as a whole. Thank God it was not Scala, just a couple of hundred metres away, which burned down. That's probably the ultimate movie house in Bangkok and it would have been an even bigger loss. 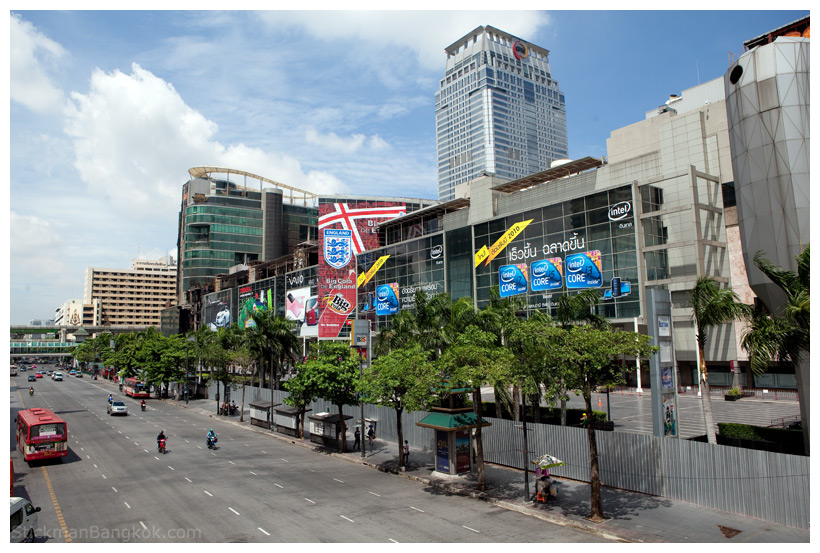 Life in Bangkok is quickly coming back to normal, perhaps the return of Bangkok's famous traffic jams the biggest indicator of all. I may have reported that there were few security forces present in central Bangkok today, but I can say that at some suburban malls there is an armed police and military presence. There's also talk of the curfew in Bangkok continuing for another week, with the hours revised yet again, the curfew running from midnight until 4 AM. It may not affect me personally, but it has become a bit of a burden for party animals, the entertainment industry as well as market vendors and many food sellers for whom their work day can start as early as 3 AM, buying food at the local market and preparing for the new day.

As per my previous posting, I believe that it is safe to return to Bangkok and don't anticipate any problems in the short term. There has been much in the press about how the issues that this protest raised will be dealt with in the long-term but I am not just hopeful, but confident, that we will not see a repeat of the dramas we have witnessed in Bangkok in recent times. 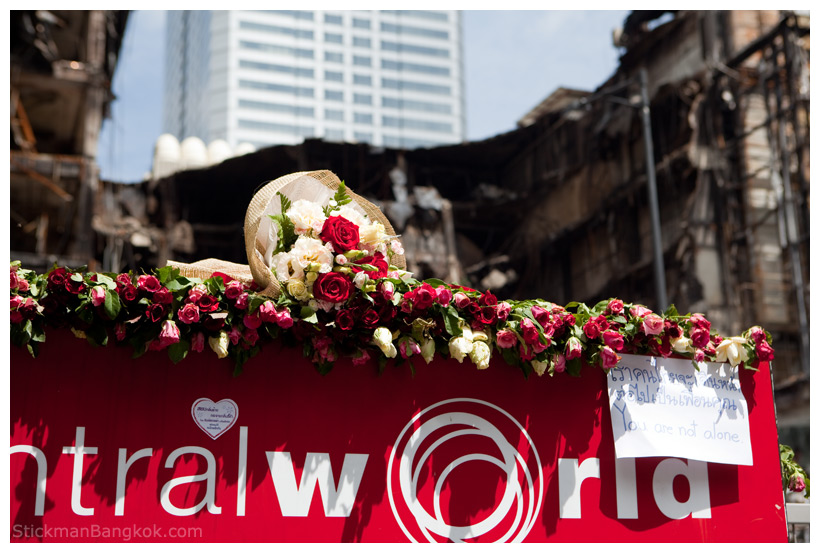 This may well be my last update on the red shirt crisis. In one way I feel a little sad about that, because I have enjoyed covering the events of the last several weeks immensely. It has given me a new lease of life with this website at a time I have found myself really struggling to muster up the interest to cover the comings and going of Bangkok at night. On the other hand it is of course a positive that my coverage has come to an end because it means that, for the time being at least, the problems that have plagued Bangkok as well as other parts of the country are, we hope, over.

To everyone who has sent in emails of appreciation for my coverage, I thank you. This section of the site became hugely popular and last week resulted in traffic to this website going through the stratosphere, beating the previous record for the number of visitors in one day by two times – which really is quite unbelievable. If things do kick off again in Bangkok – and here's hoping that they do not – you can count on me to be right there covering it!

Thanks so much for tuning in. I hope you have enjoyed reading it as much as I have enjoyed putting it together!