* All photos in this report were taken late on the evening of Friday May 14.

As the motorbike zoomed towards my usual Friday night destination of Soi Cowboy, I looked down from the flyover on to Rama 4 Road in the direction of the main commercial district where I saw plumes of smoke gently floating into the sky, slowly dissipating. Even over the whirring and purring of the bike's engine and exhaust I could make out the sound of distant, sometimes thunderous explosions. Whether they were bombs, firecrackers, grenades or something else, I did not know. As the mainstream media has been reporting, Bangkok turned into a war zone yesterday.

In the relative safety inside a bar in Bangkok's neon jungle of Soi Cowboy, I chatted with friends who work in the upper Sathorn area. They reported not just hearing, but seeing gun fights, soldiers pointing their guns in the direction of protesters and firing. Like me they had see this sort of thing on the news, but to see it in person was rather a different experience.

That Friday was going to be the start of the real battle, the fight to take back control of the downtown area and disperse the redshirts, had been communicated by the government the night before. Few working in the downtown area made it to work on Friday and by mid afternoon those who had were now trying to get back home. So when the inevitable broke out, fighting for real, the area was almost deserted. 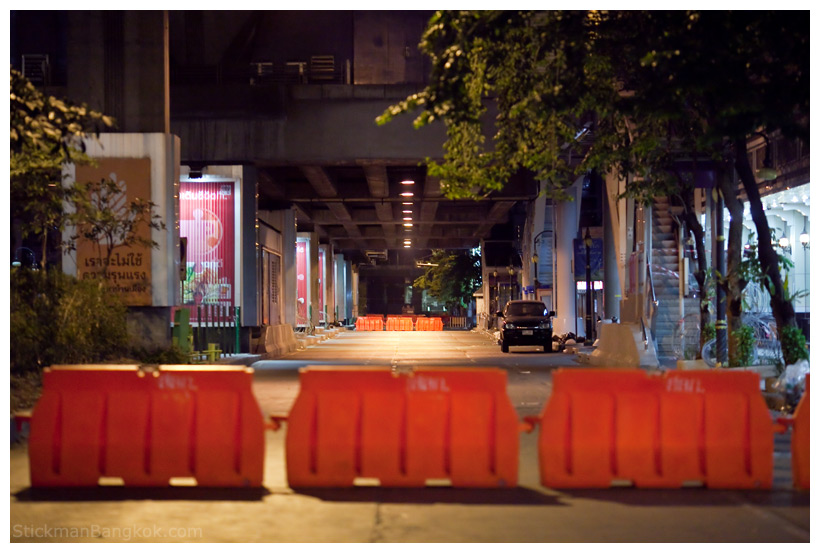 I did not make it to Silom until late evening. Getting there from Sukhumvit was a mission, not because traffic was bad – it was not – but because the skytrain and the underground had stopped running hours earlier. When I finally arrived, having convinced a taxi driver to drop me off on Narathiwat Road from where I would make my way up to the Silom Road / Rama 4 Road intersection, the area where it had all been happening, I found an eerie silence.

Silom Road was deathly quiet. Orange blockades were spread out across the road at various points and there were few people about. As I made my way up Silom Road, heading in the direction of Rama 4, the nearest visible person was perhaps 200 metres from me. There I was, walking up the middle of one of Bangkok's busiest roads, right in the heart of the commercial district, and it was deathly silent.

Cutting a lone figure through the dimly lit heart of Bangkok, I spied small numbers of security forces in the shadows, soldiers here, police there. Almost all of the businesses in the area were closed, the exception being 7 Eleven branches south of the Sala Daeng BTS station which appeared to be open. Had management compelled the staff to go to work? Knowing Thai employers, nothing would surprise me. Bangkok Christian Hospital also appeared to be open, but that was about it. Shophouses were shuttered up, malls closed, street vendors long gone.

I made it as far as the main Patpong soi which was largely in darkness, the night market nowhere to be seen. A few lights could be seen emanating from some night spots at the Suriwong end, the distant thud of music suggesting some nightspot owners remained optimistic. 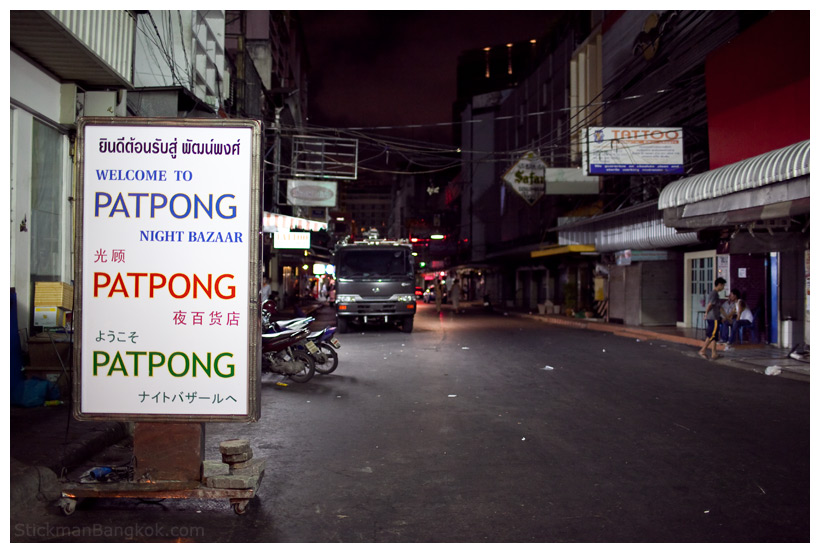 From the northern edge of the Sala Daeng station to the top of Silom Road is less than 200 metres. By day it's busy with heavy pedestrian traffic, grid lock pretty much all day long, a section of road that we locals avoid like the plague. By night it transforms but in many ways it's little different. Street vendors set up their stalls peddling overpriced junk to unknowing tourists and with pesky touts offering you blue movies and the stop start movement of first-time visitors, the pavement is just as difficult to negotiate. The area is known for its vibrancy, and its colour, but tonight it was silent. I felt like the main character in a horror movie, surrounded by a deathly silence, walking into the unknown…

There were no security forces around. On previous night-time visits to this hot spot there had always been small armies of soldiers and police. Their absence, at least from my vision, sent a chill down my spine. I knew that protesters had been killed in this area just hours earlier, a Canadian journo as well as two local reporters had also taken rounds. This was the hot spot where it all happened, but no-one was around. Did I fearlessly and boldly stride up the road into the heart of the action, eager to see it for myself and capture the action? To say yes would be a lie, for I found myself creeping in the shadows, making small, measured foot steps, knowing that there were probably several sets of trained eyes peering at me through binoculars from all angles, watching my every move. Perhaps I was even in a sniper's cross hairs? Could I be a threat? Could I be a red shirt operative? I proceeded on, curiosity again proving to be my worst trait. 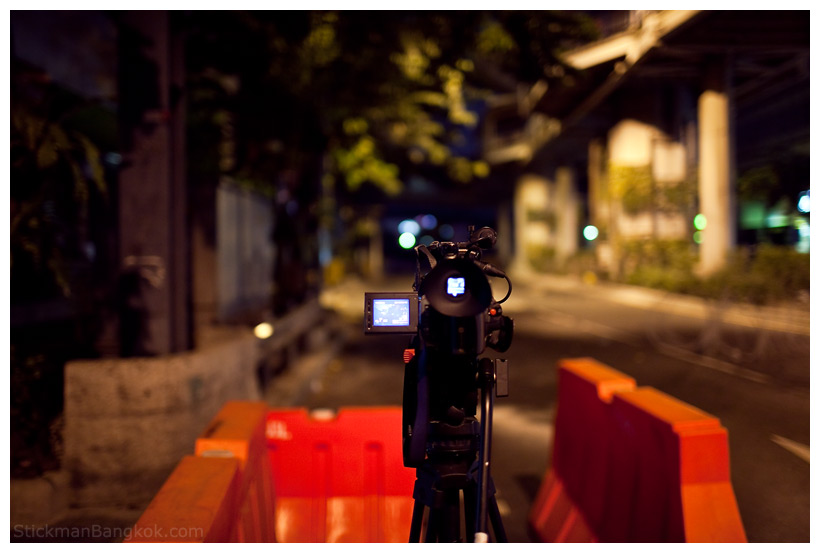 Local journalists seemed genuinely scared. I saw some hiding in alley ways as I passed by, a strange look on their face as if to say, "Where is that crazy guy going?" One team had set up a video camera in the middle of Silom Road, pointing towards the reds' barricade, the area where their militant arm seems to be stationed, the very same area where their self-elected military advisor, Seh Daeng, took a round in the head a bit over 24 hours earlier. 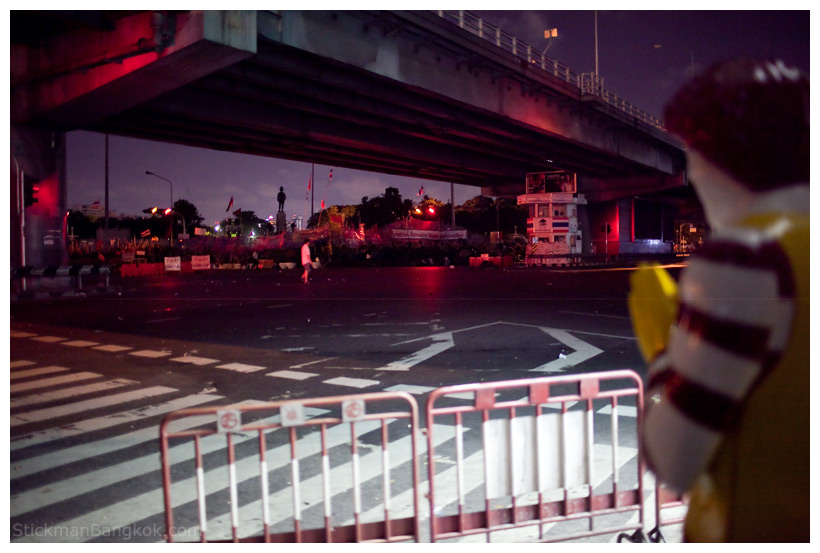 It was deathly silent at the top of Silom Road where strewn across the intersection were debris, stones and glass. The eerie tranquility was soon punctuated by distant explosions that seemed to come from somewhere over to the east. 500 metres away? A kilometre? I could not tell. There we stood, Ronald McDonald and I, taking comfort in the presence of each other, my temporary pal prostrating himself in a continued wai at the red shirts opposite.

50 metres away in the reds compound I could not see nor hear anything. No lights could be seen, no distant murmurings heard. Were they there? If they were, what were they doing? Had they been driven from that part of their camp? There was no way I was crossing the road to check it out! To do so would be like walking into an open field, woods on either side, opposing forces in each. It was scary enough just standing there at the top of Silom, jumping from shadow to shadow. Walking out in the open could be a suicide mission.

A figure made its way across the intersection. Clearly a civilian, there was no hurry, no urgency and as is so often the Thai way, no panic. He slowly made his way form the northern side of Rama 4 Road, near Chulalongkorn Hospital, almost floating across in a diagonal direction towards the deserted Dusit Thani. I trained the camera on the figure, morose thoughts running through my mind. Would this civilian be picked off by a sniper? Would I get the shot? Would I be fast enough? 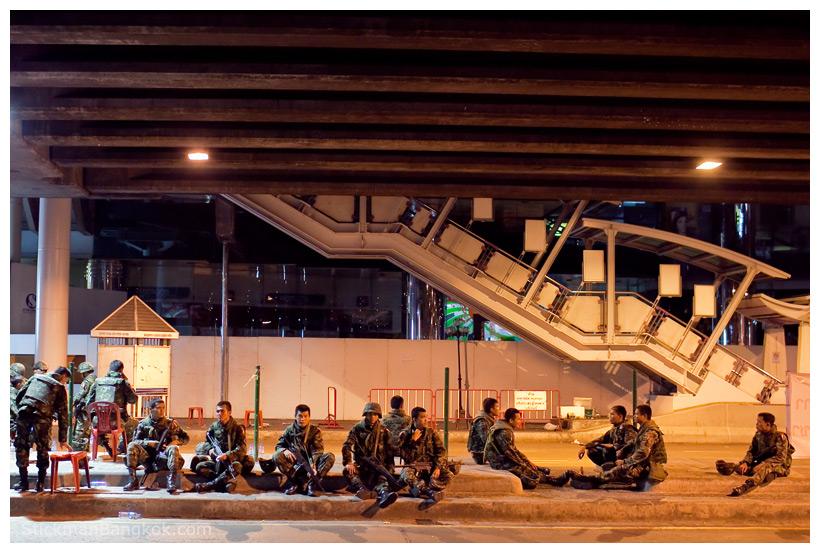 They say that sleep is like a small slice of death. I would argue that the sound of silence on the apron of Bangkok's battleground, not knowing who was hiding in the shadows, who was watching you and what will happen next is so much closer to death than a slice of shuteye ever will be. My heart was pumping, my breathing deep, a mix of fear and excitement running over me. I wanted to stay, I wanted to proceed further…but the cost could be too high, a cost I was not willing to pay.

You can only stay out of your comfort zone so long and the sensible side of my brain finally convinced the adventurous side that retreat was the best option. So back down Silom I scurried, past local reporters hiding in an alley, soldiers hiding behind pillars under the skytrain station and down to Patpong soi 2 which was in complete darkness, every venue shut for the night. 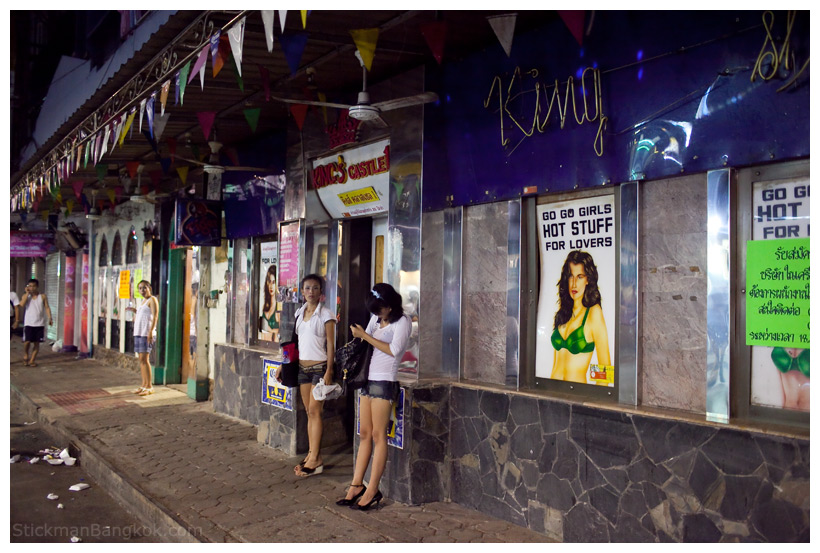 From Patpong soi 2 I made my way to Patpong soi 1 where a few bars were lit up. I walked around in a bit of a daze. I may have been on Adam's ale at Cowboy and was totally lucid, but the adrenalin was pumping, the excitement of the situation, to say nothing of the danger, was not lost on me.

King's Castle 1 and 2 were closing for the night, the house lights had come on and girls were emptying out on to the street. I guess the two bars had been open earlier but must have made the decision to close, most likely due to a lack of customers.

The area was dead. I didn't see another Westerner roaming.

Girls exited the bars with hunger in their eyes, every other girl giving me the glad eye, eager to find someone for the night.

At best count 4 bars remained open in the main Patpong soi. The old upstairs favourite, Queen's Castle II, as well as Madrid, Goldfinger and Kiss. They braved it out despite there being very few customers about. 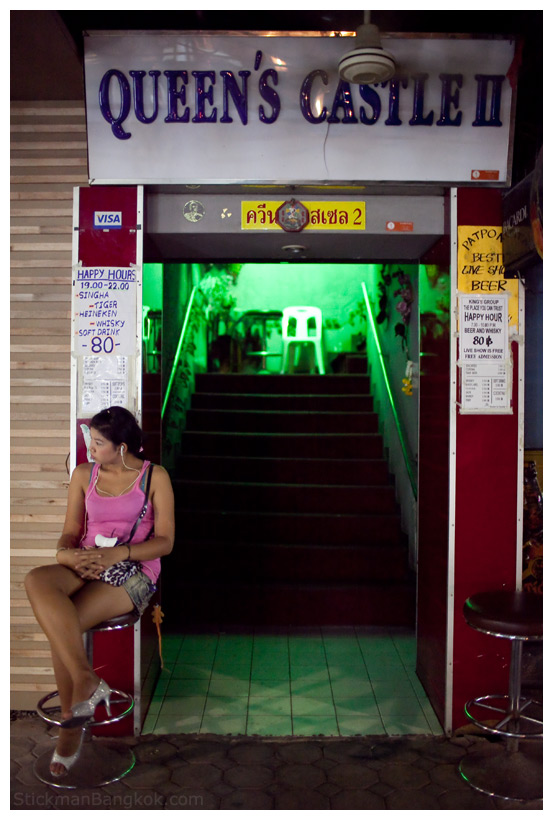 I needed the fortification of a stiff drink and made my way into Madrid. An honest drink at a reasonable price without the bother of some girl desperate for more than a lady drink. I broke my dry spell and ordered a Jack + Coke – and wow, did it taste good!

There I sat, one of just 5 customers in this landmark venue, going over in my mind what had happened today, the events I had seen on TV, what I had read in the mainstream media, and what I had just seen with my own eyes.

With Jack settling my nerves, I made my way back out on to the quiet main Patpong soi. I strolled along, now in my own little world, oblivious to the approaches of the odd tout and the calls of girls to join them. Reaching the western end of Patpong and spilling out on to Suriwong Road, there was little traffic about. It was a different world to Silom. Separated by perhaps 200 metres of tarmac, where Silom Road had roadblocks and small pockets of security forces, on Suriwong it was business as usual. Bars, restaurants, massage parlours and street vendors fought for the few potential customers about. The lights were on and they remained open for business.

History is being made in Thailand. Exactly how it will be written and what the fall out will be is still very much an unknown…