The presence of soldiers and police in and around Silom Road is much less noticeable than it has been. As I got off the skytrain at the Chongnonsee station early this evening and made my way slowly up Silom Road, there were very few soldiers to be seen on patrol, far fewer than there seem to be on patrol during the day. In fact from Narathiwat Road all the way up Silom Road, I did not see the firs single infantryman until I reached the branch of McDonalds opposite the Silom end of the main Patpong soi.

Further up Silom Road, below the Sala Daeng station, there remains a dozen or soldiers sitting behind razor wire. The area outside O’Reilly’s, adjacent to Soi Thaniya has been a favourite spot for a small contingent – and doubtless it is a popular spot to be on sentry duty with the staff in the nearby Irish pub O’Reilly’s bringing them refreshments.

Patpong sois 1 and 2 were completely free of any police or military presence tonight, both within the sois themselves and at each end. As far as I could see there were no security forces patrolling who was coming and going. But for sure, look up to the sky and there are still heaps of them camped out on the upper floor of some car park buildings in the area. 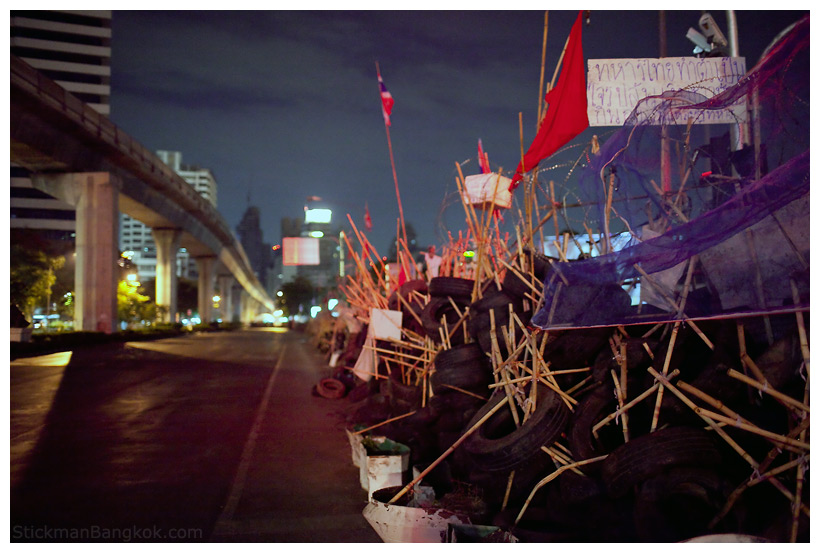 I am told that later in the evening checkpoints are set up on Silom Road – but I did not hang around to see.

Patpong was very, very quiet with few people around, the area probably as quiet as I have seen it.

I wandered up to the top of Silom Road and made my way into the reds’ encampment where it was business as usual. Large screens and huge speakers allowed not just those within the red controlled area but also those outside to enjoy the wisdom of the speakers on the main stage just a kilometre or so up the road at Rajaprasong. It was the usual rhetoric, ranting against the PM, his deputy and anyone else who wasn’t in favour of the reds. 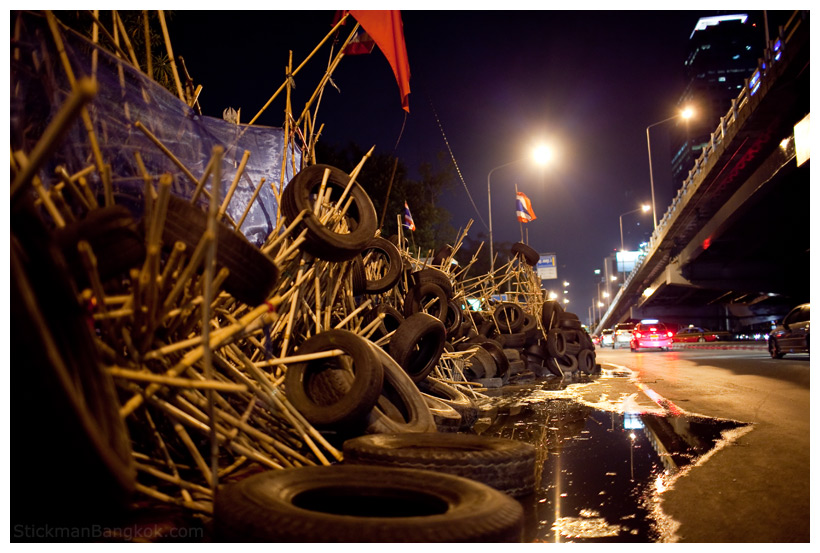 The mainstream media reported that the government plans to cut off the power and water supply to the downtown area the reds control, a move which will undoubtedly see many innocents suffer. There are many condominiums in the area, high end places, where more than a few well to do expats reside. They’re going to be pissed, to say nothing of the embassies in the area which will be none too pleased! 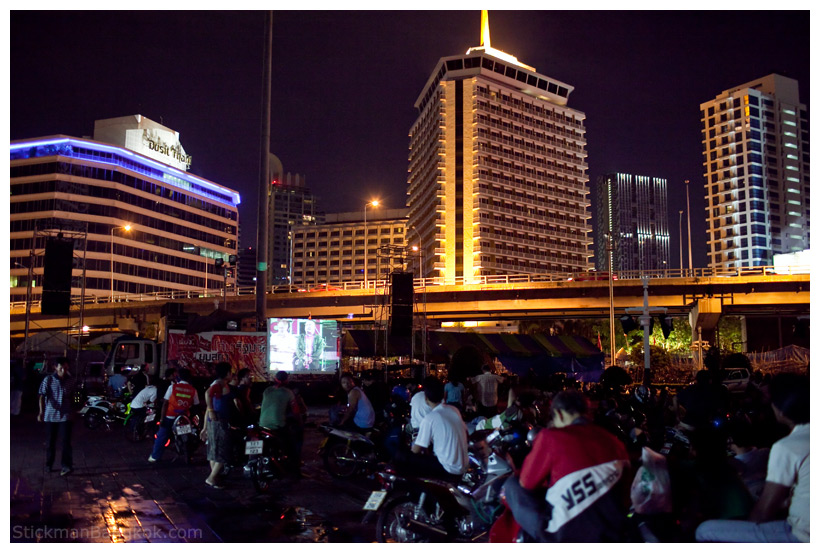 But the reds seem to be digging in and there is a real resolve. I hadn’t been inside their encampment at night for about a week and it was humorous to see the guards peering through binoculars at the tops of the tall buildings that surround their position, looking for government troops watching them. Are they genuinely concerned that an effort might be made to remove them? 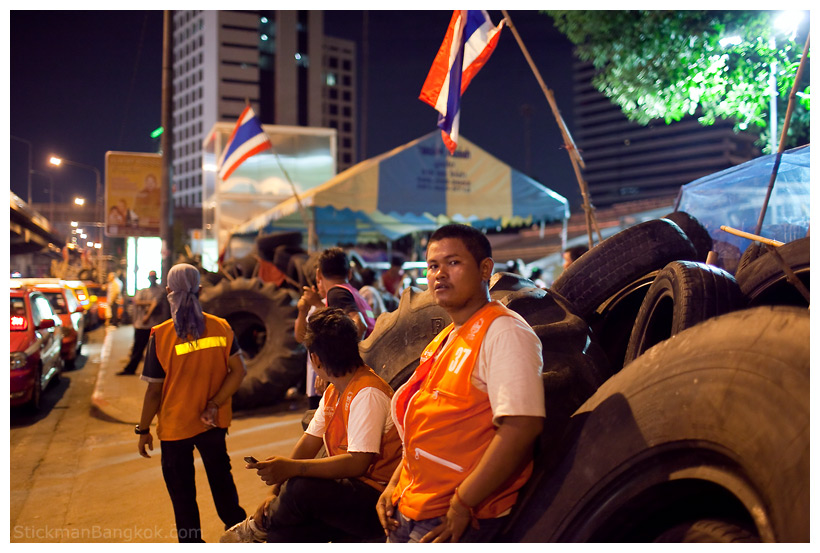 If the reds are still in their position next week then things are going to get interesting. Next week marks the beginning of the school year and a number of schools, big name schools like Triam Udom and Mate Dei, fall inside or very close to the red shirts’ encampment. And there are many other schools nearby. This is interesting because wealthy Thai families insist on driving each and every child in their family to school which causes traffic chaos. With many of the central roads still closed, and many schools in the area, this is going to upset many. Further, these are the kids of rich families, families which are yellow supporters, families which are very distrusting when it comes to the reds. And they’re families and people with influence and power. 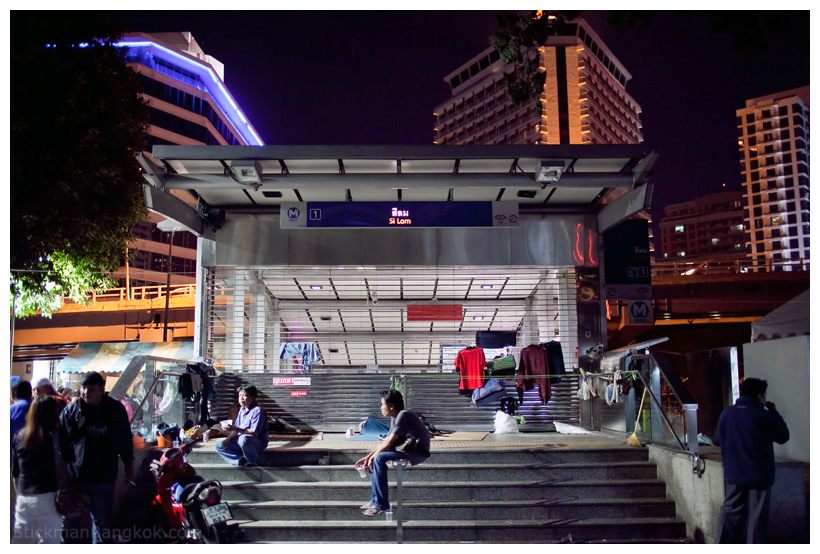 Will something happen between now and then? 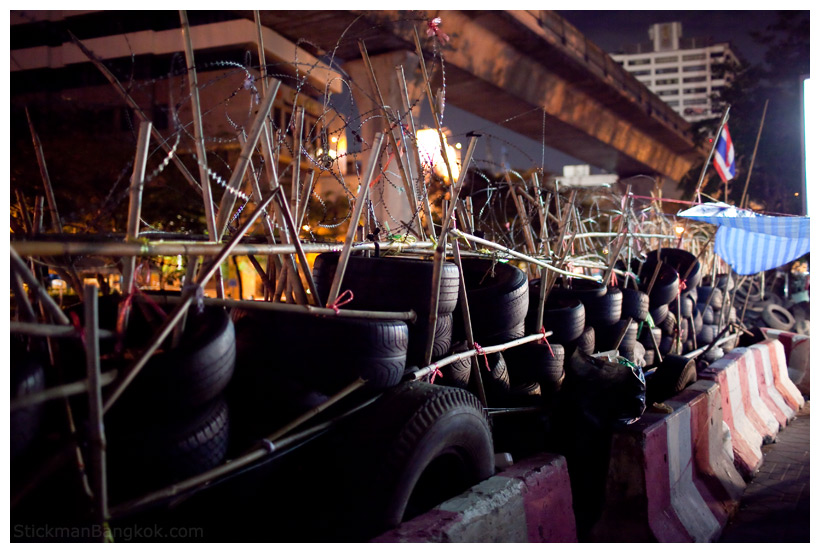 It should be noted that in my last update, on May 10, I mentioned that during my day time walk many of the reds looked lethargic and just didn’t look like they wanted to be there, or at least that was the impression they gave me. The next day it was announced that the mercury hit its highest level in 10 years in Bangkok – which would go some way to explaining why there was a feeling of lethargy in the air.