The red shirts' occupation in downtown Bangkok continues. While the reds seem to have stopped their land reclamation for the time being, they have not given up any of the area that they control.

There has been a noticeable increase in presence by police and soldiers in the Nana area and as far west as Sukhumvit soi 1 are groups of soldiers and police along with rolls of razor wire. Are they expecting the red shirts to spread as far east as Nana? 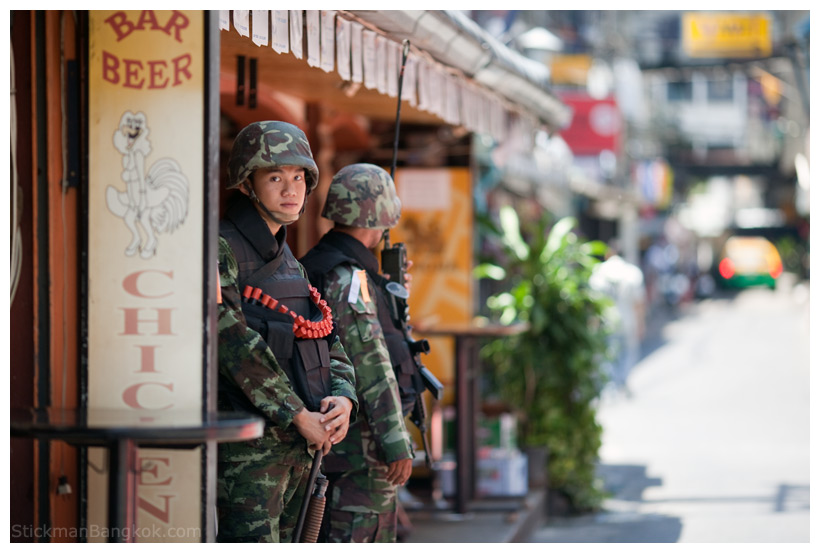 There are fewer police and soldiers visible in the Silom area around Soi Convent and Patpong, although they remain in significant numbers from Narathiwat Road in the south and at Rama 4 Road to the north. There were no soldiers on Patpong soi 1 this afternoon but the western end of Patpong soi 2 was being patrolled by the soldiers in the photo above who had set up a checkpoint for any vehicles passing by. Anyone on foot is allowed to pass unhindered.

A large military presence and security force remains in the area. Look up to the heavens and you'll see towels, and various other items belonging to soldiers hanging out to dry. Down side sois, in parking buildings and behind mesh and camouflage material remain troops on guard for an invasion of the commercial district. 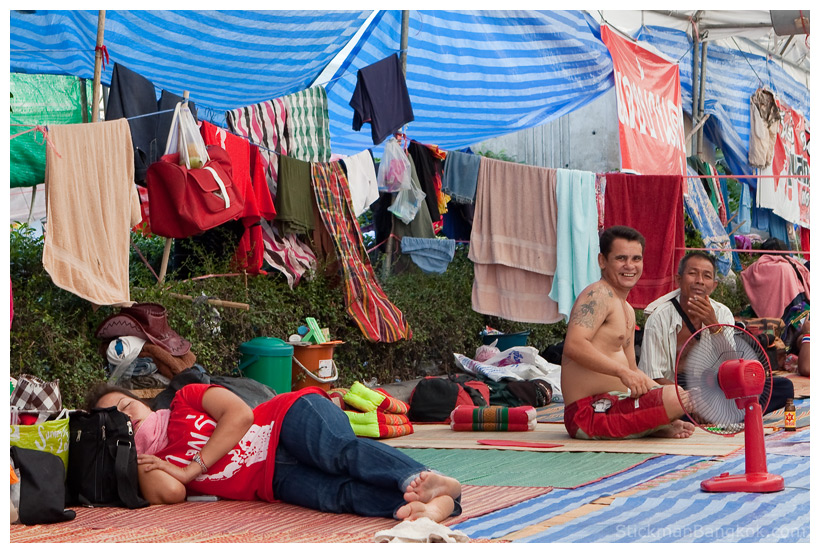 The mainstream media reports that the red shirts occupying the Rajaprasong intersection and its surrounds have been joined by reinforcements from the provinces. I had not walked through the area for a few days but it did not seem to me as though the numbers had increased. If anything, the number of people in the area might have dropped, although it was stiflingly hot today and that may have driven some protesters away during the hottest time of the day. 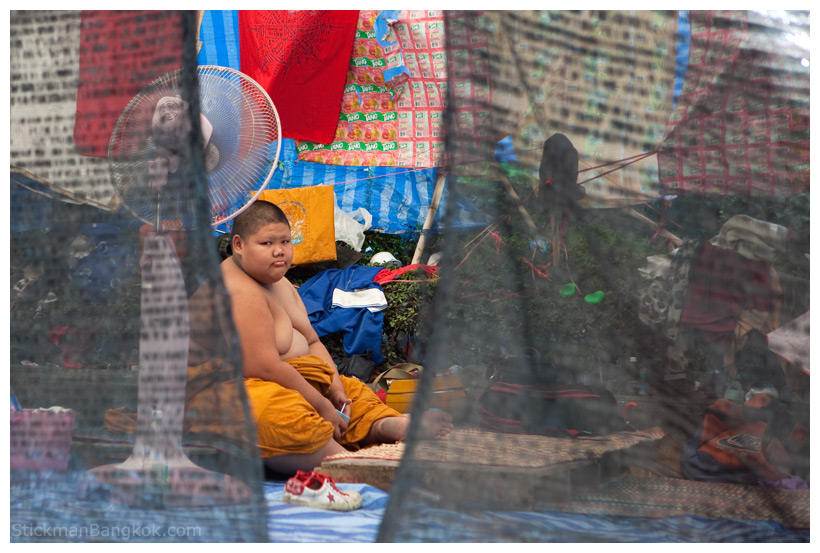 Those protesters who remain are for the most part older folks, kids, rural folk and even a few monks. Most are just lounging around, sleeping, really not doing much of anything. Some are playing cards, others drinking, more than a few wasted by early afternoon.

There's very little energy and not a great deal of enthusiasm. At one point a speaker called for the cry of "Apisit, get out!", but the response was so lackluster that she called for them to do better there was silence.

The hot weather, boredom and being homesick might be getting to them. You get the feeling many of the protesters really don't want to be there any more. 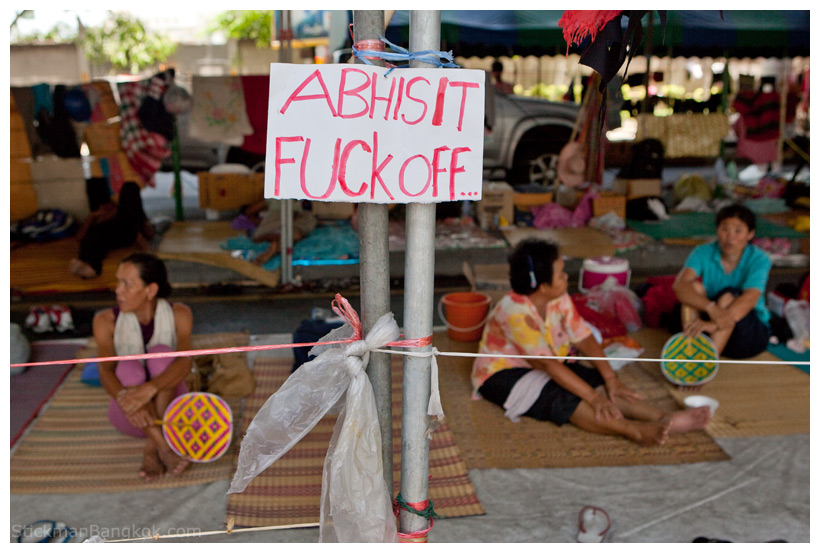 What I noticed more than anything on today's walk was the more aggressive nature of the signs and notices protesters had placed around the occupation area about the Prime Minister, Apisit Wejajiwa.

There are all sorts of signs with nasty messages and slogans about him posted around what now resembles a rural village. There's also a lot graffiti with many of the skytrain escalators and pillars full of obscenities about the Prime Minister. 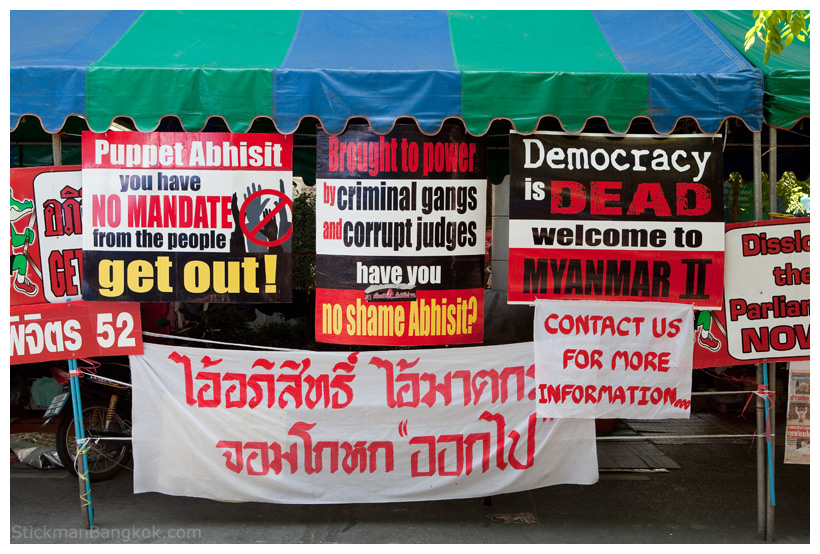 There is no shortage of English language signs around about, some of them clearly showing the radical element that has entered the protests. It wasn't quite so bad on the loudspeaker system today, but I put that down to it being incredibly hot and no-one having the energy to rant about the same things they have been going on and on about for days on end. 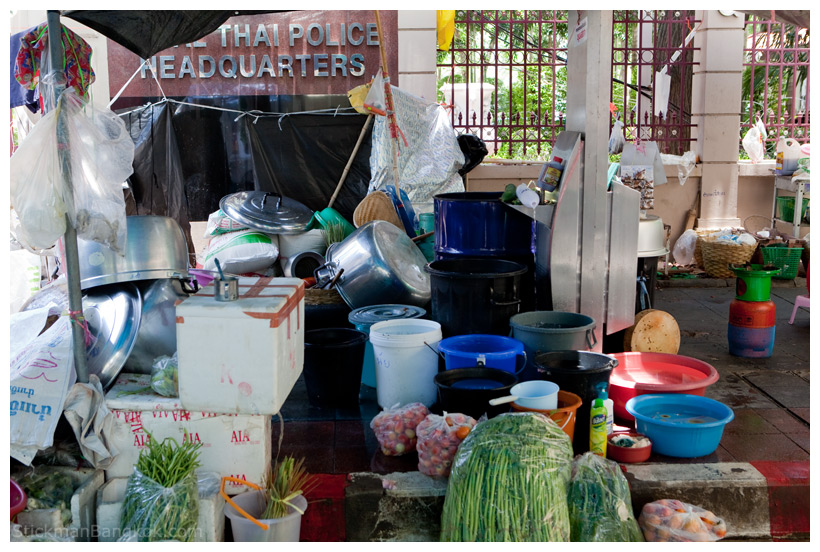 The police presence in the area around Rajaprasong intersection and the shopping centres – all of which remain entirely closed – is zero. It's amusing, but scary at the same time, that the protesters have put up barricades outside at least one entrance / exit to the Police Hospital and have also commandeered the area immediately outside national police headquarters, as per the photo above. 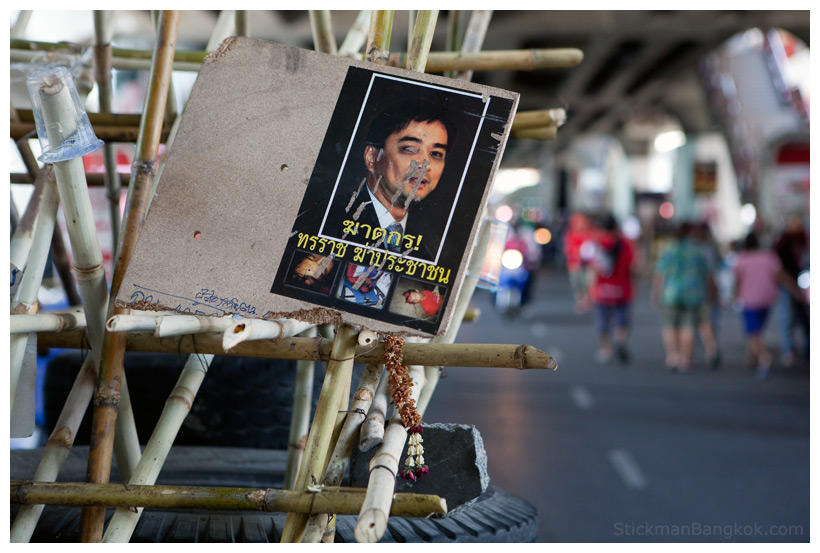 Mr. Apisit is clearly not flavour of the day with the protesters and images like the one above are spread right across the area. It says that Apisit is a murderer and that he killed members of the public.

My feeling, and it is nothing more than that, a feeling, is that the reds' resolve is not quite what it was. There seem to be a lot of really bored people and I just had that little suspicion that more than a few just want to go home. Time will tell…