* All of the photos in this report were taken late either on the evening of Tuesday May 4 or the afternoon of Wednesday May 5.


If you haven’t been following the mainstream media, it’s important to factor in that Prime Minister Apisit outlined plans for reconciliation and the current political impasse in Thailand on Monday night in a live television broadcast. I think it would be fair to say that many expected this to result in a de-escalation of the ongoing political crisis, but walking around the red shirt camp briefly last night, and then again from Mahboonkrong, all the way down to Silom Road today, I am not sure that things have de-escalated at all. 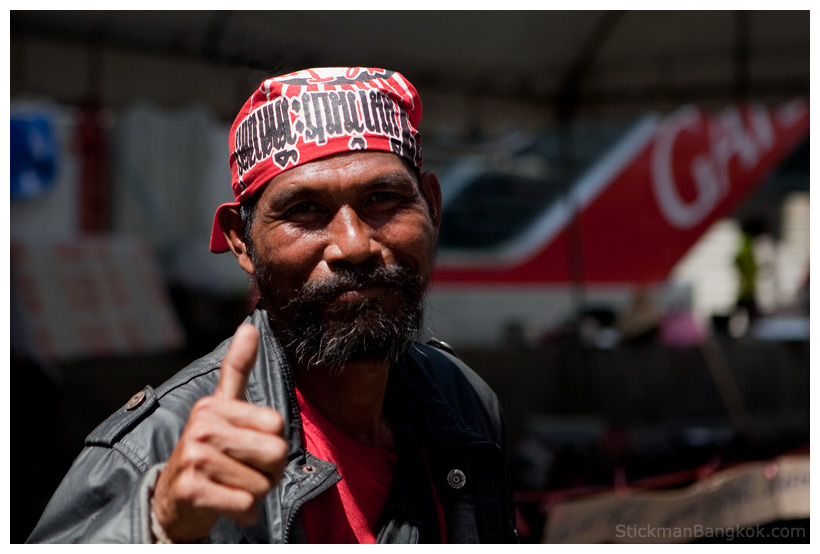 The police and military presence on Silom Road remains. The red shirts have moved their barricade at the bottom of Rajadamri Road, as per the photo below, to allow visitors to come and go to Chulalongkorn Hospital, the very hospital some of their number stormed last week, without obstruction or delay. 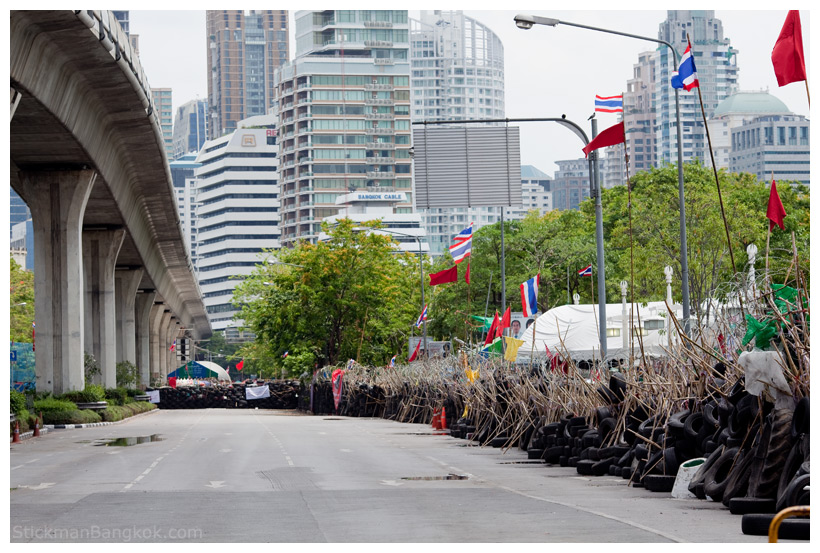 It seems to me that the red shirts have started to place a greater emphasis on spreading their message to both their supporters and the general public. They are very keen to distribute their VCDs and I was being approached all the time, offered free copies of the VCD which shows what they consider are atrocities committed by the government-backed troops. There seem to be more and more loudspeakers in the area where the red shirts are present and they are played at typical local deafening levels. There are more and more information boards set up with photos of the so-called atrocities. Some are pretty graphic. 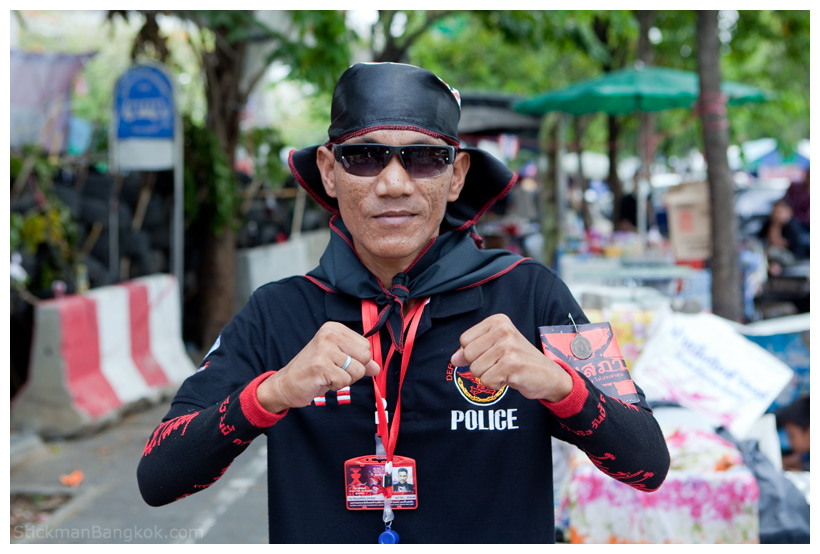 There is more and more commentary being made in English, which suggests to me that the red shirts want their message to be picked up outside the country. Family members of some of the victims who died or have been injured came along to speak, their thoughts translated into English. There was also an English translation of results of some of the autopsies of the victims with the speakers outlining what sort of injuries the protesters died from – head shots – and what sort of rounds they were hit by – from an M16.

I have to say that some of the speakers really ranted and some of their comments can only be described as extreme. I would need to exhaust all of the profanities in the English language to accurately convey what some said, needless to say that Apisit was called a bloody murderer and 100 years in jail would not be nearly long enough for him. 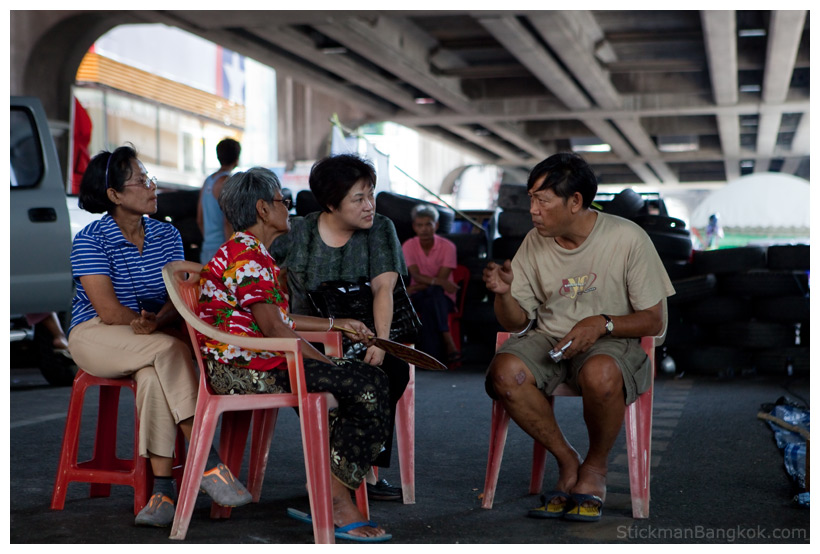 Some might disagree, but I thought the reds were starting to get into a bit of a blame game and some of the vitriol I heard today was not what I expected after the PM has made an effort to be conciliatory. Sure, the words said might not be shared by everyone, but they're being broadcast on a loud speaker system across most of their camp, which covers about 3 km of downtown roads.

The skytrain has resumed from 6 AM through to midnight. I am not sure about the underground which had been running full schedule, except for the Silom station which closed at either 7:00 or 7:30 PM. For sure, one entrance which empties out into the reds’ occupied area remains closed! 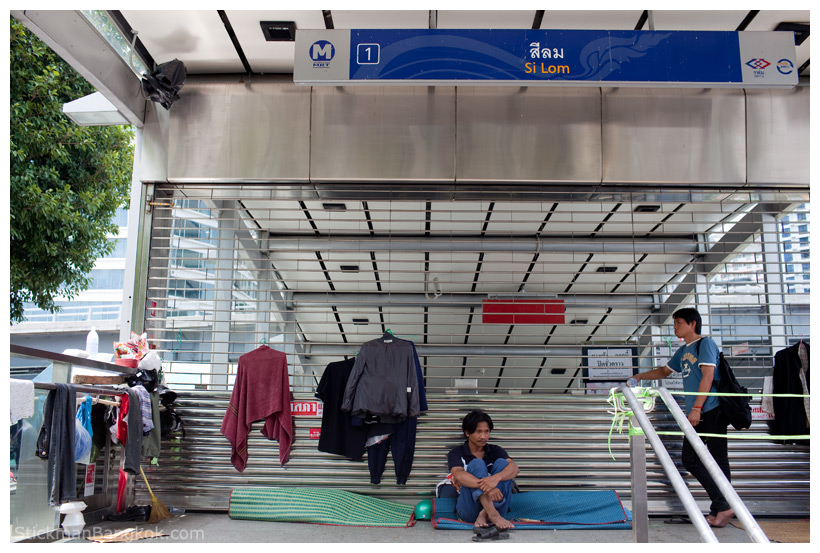 Throughout the reds area they were signing up for official “red shirt membership”. The whole registration process is really well-organised, with an orderly queue (!) leading into a tented area where officials have computers and digital cameras to register the applicants. In fact if there is one thing that really impressed me about the red shirts, it is that they are amazingly well organised. Things are also really orderly, quite a contrast from ho things can be at times here in regular life. I guess that is the what happens when everyone is working towards the same cause. Wandering up Rajadamri Road, I couldn't help but notice some of the tall condominium buildings and wonder how many foreigners have got caught up in this. For those who live in the area – and that would be quite a number I imagine – going to and from their place of residence means they have to make their way through the red shirt encampment. It would be difficult to use a car if they drive themselves, and all of the stores in the area, such as 7 Elevens, street vendors and what not would be out of action, adding to the inconvenience.

Also spare a thought for the 20 odd foreign English teachers who I heard have been laid from the main branch of AUA which is on Rajadamri Road, near the BTS station. This may be the largest single language institute branch in the country and it has been closed for a few weeks. I imagine AUA is trying to find the teachers work in other branches or perhaps give them first priority on openings that come up in other branches around the country, but still, I can’t help but feel sorry for them. 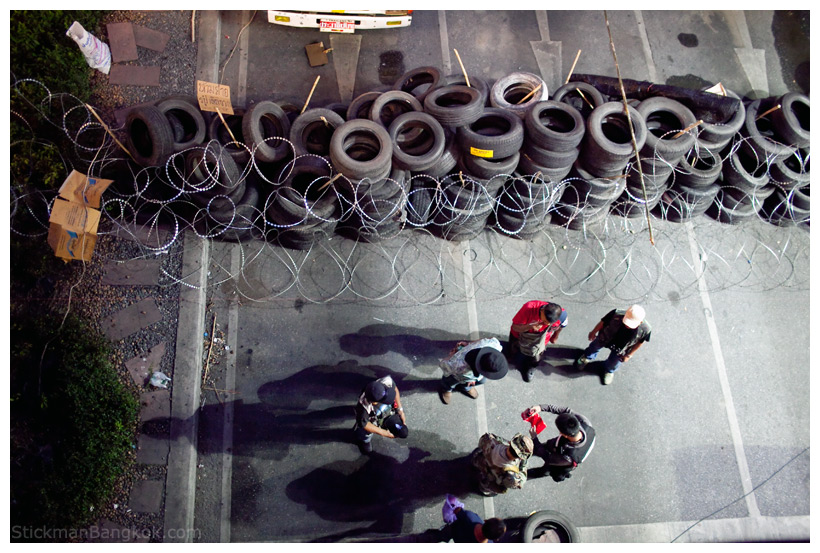 Walking around today, my feeling is that little if anything has changed with the red shirts since the prime minister's announcement. The seem to be much the same although I don't doubt that there are backroom meetings taking place amongst senior red shirt members. Whether they retreat based on the proposal the prime minister outlined on Monday night is as yet unknown.

As long as things continue as they are, the warnings I have previously mentioned remain.