The red shirts area of occupation seems to be expanding further and further. This past week they took over the area outside Central Chidlom and effectively forced Soi Lungsuan closed, a soi which has a number of high-end condominiums housing
Western residents as well as many upmarket restaurants and cafes. It is an area where many foreigners on expat salaries live, and is especially popular spot with those employed at Western embassies, many of which are near by.

The photo below was taken outside of Central Chidlom, looking west at the Chidlom skytrain station. The red shirts have erected their signature gate with bamboo, treys and razor wire. Disconcertingly, as per almost all of their barricades, just a few
metres behind is parked a lorry with large gas canisters attached to the underside. It doesn't take a genius to see why it's there… 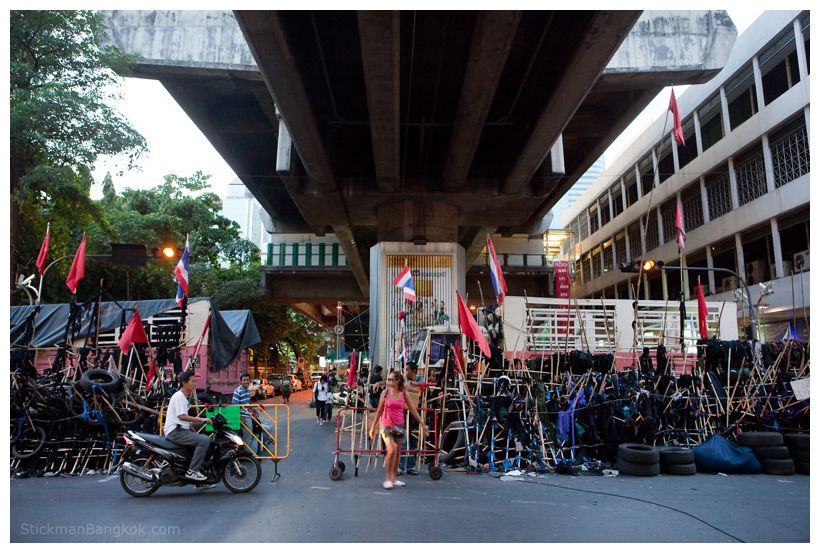 The area of Ploenchit Road between Central Chidlom and Wireless Road is very quiet. The reds control the area but there's not much happening there with little in the way of vehicles passing (which must pass through the red checkpoint) or foot traffic. 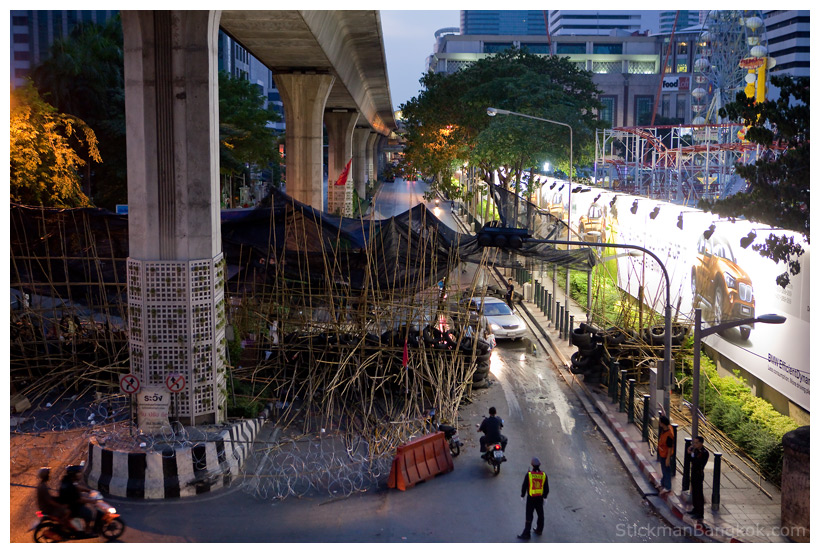 At the intersection of Wireless Road and Ploenchit is the tallest red shirts barricade I have seen with bamboo that towers 20 feet or more into the air. The barricade is also surrounded by razor wire and I cannot help but wonder just how on earth this
came into the red shirts' possession? Wireless Road is home to many embassies and a good number of international companies have their Thailand office on Wireless. 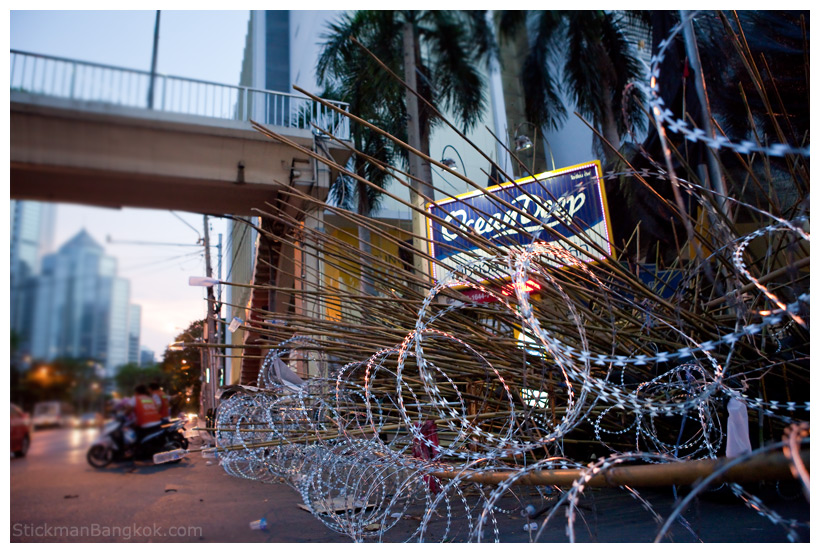 There's a large gap in the barricade so it is easy for individuals and vehicles to pass through. As I said in a previous update, I can't help think that the barricades would not really be that effective, given that there is a wide opening for
pedestrian traffic and vehicles to pass through. From what little I have observed, some of the gaps in these barricades seem to be permanent which really renders the integrity of the rest of the barrier useless. But then maybe I am missing something? 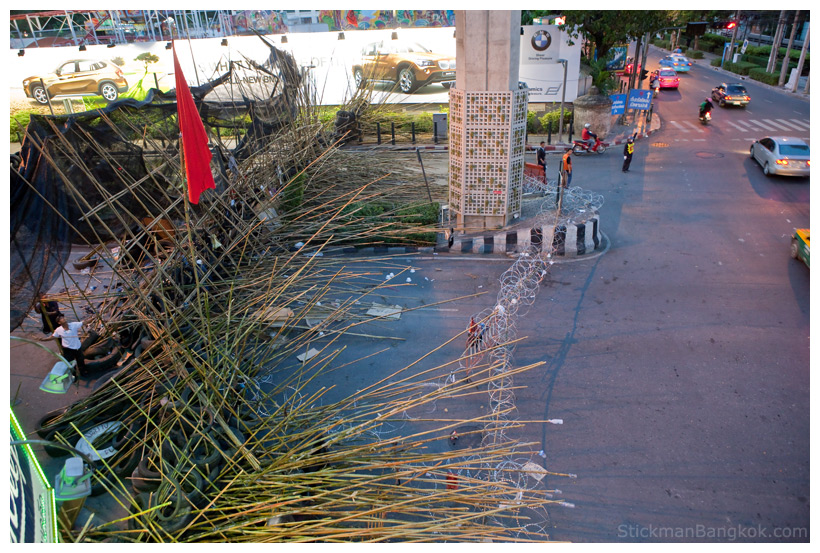 Standing on the overhead walkway at the Ploenchit / Wireless Road intersection, I found myself looking down the road towards a number if embassies, amongst them the US embassy. Now this whole occupation and protest may have nothing to do with the Americans
but one has to wonder if there is a possibility that the redshirts could start protesting outside the US embassy? It's located just a few hundred metres down the road in the photo below. 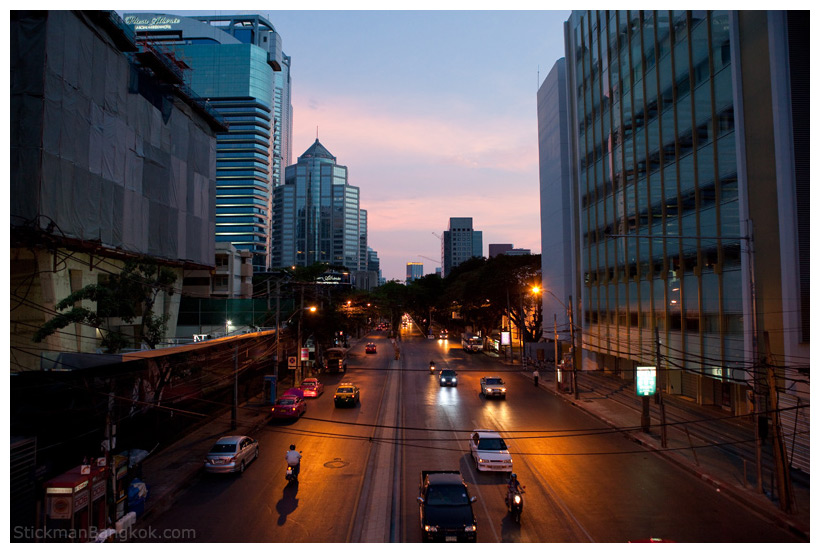 Troops can be seen at the Nana and Asoke skytrain stations as well as on the ground, between Sukhumvit sois 1 and 23. They seem to be in relatively small numbers in that area although there are a few military vehicles parked on Sukhumvit. 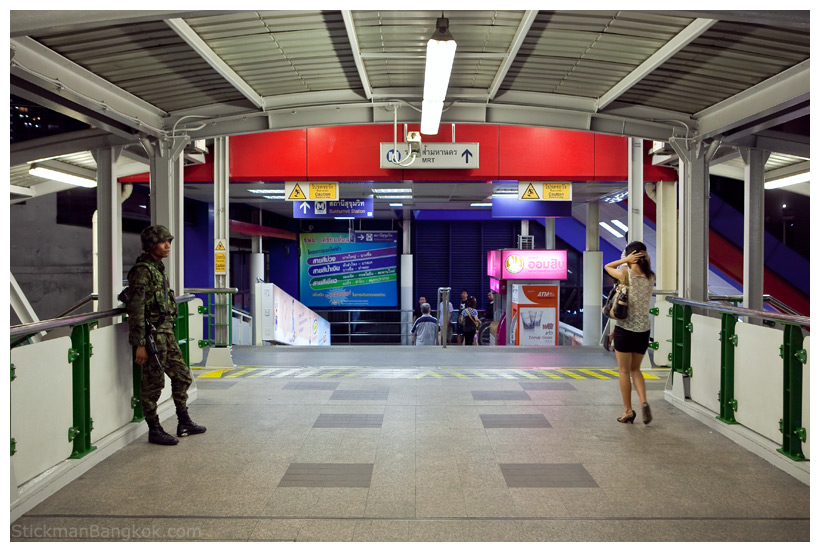 I have been receiving a lot of emails, from both regular readers as well as new readers, asking me whether it's safe to travel to Bangkok and what the effects are on holidaymakers. A number of people have also asked me about whether the airport might become occupied like it was in late 2008 by the yellow shirted protesters.

As far as shopping goes, the most popular shopping centres in central Bangkok are closed and the area where they are located is controlled by thousands of red shirt protesters. While some Westerners have ventured into this area and walked around without incident, it is recommended that you avoid this (expansive) area completely.

There is always a chance of getting caught up in something which cannot be ruled out. It is very unlikely but it could happen.

If you are the nervous type, or a worrier, then Bangkok might be best avoided for the time being.

Outside of Bangkok I imagine that you wouldn't notice that there are any problems at all.

My *feeling* is that it is very unlikely that the airport will be targeted by the reds like it was by the yellows 18 months ago. Of course, nothing can be ruled out.

Travel insurance companies will NOT insure you for travel to Thailand at this time.

If you know Bangkok well and are a frequent visitor to the city and shopping is of little or no importance to you and you have no need to visit the Siam Square / Central World area, there's probably no need for you to change your plans. If you're a first time visitor, it's probably best to wait until this whole crisis has been resolved – or at least until the red shirts' occupation in central Bangkok is over.