* Photos in this report were taken on the evening of Sunday May 16.

Life goes on in Bangkok as we expats try to avoid all of the crap that is going on around us. For those who live and / or work in central areas that isn't easy.

The no go zone is getting bigger as skirmishes break out outside the red zone. For anyone who works, or God forbid lives, inside the red zone, life has becoming very interesting indeed.

The skytrain and MRT remain closed, forcing those without their own transport to rely on taxis, or increasingly, on motorbike taxis. Traffic levels seem to be lighter than they normally are. Despite many people being forced to use a car, bus or motorbike, the average Bangkokian is not venturing out and only commuting to and from work or leaving home to get essentials. 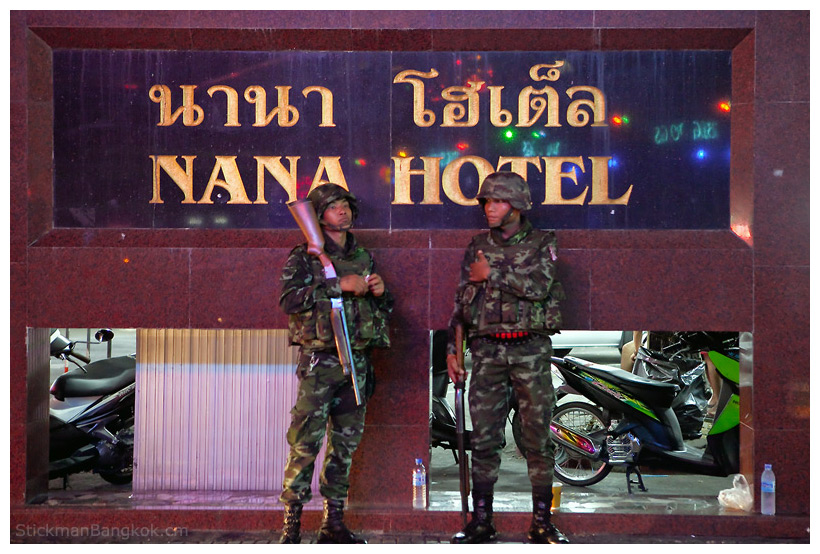 The great difficulty is that in addition to army and police checkpoints on a variety of roads, particularly those leading into the downtown area, you never know when the red shirts are going to target a road, or an intersection, and just close it down. This happened to me on Sunday night. I went from the Rama 3 area up to Sukhumvit, taking the fly over that gets you past the awful intersection at Rama 4 Road. Getting to Sukhumvit was a breeze. I went about my business there and returned about an hour and a half later to see that the fly over had been blocked by red shirts who had set up their signature barricade AND blocked the fly over ramp from each direction. There were perhaps 40 – 50 rough looking guys just milling around with perhaps a dozen or so taxis blocking the fly over at each end. Vehicles were forced to battle the intersection below where the traffic lights were out resulting in total traffic chaos, even by Bangkok standards!

Red shirt militia groups are zooming around town, taking over intersections and causing chaos. They seem to block an intersection for a period of time, perhaps permanently as a strategic move or perhaps just temporarily. Whatever the case, they do so with impunity and don't seem to face any challenge from the authorities. With so many roads in the central area closed, this can be a major hassle if you are in a car or taxi, not so bad if you're on a motorbike.

Early yesterday evening the big news was that a group of red shirts had attempted to blow up a petrol tanker which was pushed into the forecourt area of a PTT petrol station. Stories like this have made the average Bangkokian very nervous about leaving the sanctity and relative safety of their home. On top of this, images of the red shirts armed and firing weapons indiscriminately has caused great concern.

It is this lack of protection from the authorities, perhaps resignation that there is only so much they can, or are willing to do, that has shattered the confidence of Bangkok residents, Thai and foreigner alike.

The situation really is very fluid and things are happening all over the place that it is very, very difficult to get any sort of picture of what is going on at any one place at any time. There's also a lot of hoaxes, word breaking out that this or that intersection is closed when in fact it isn't, and never was! 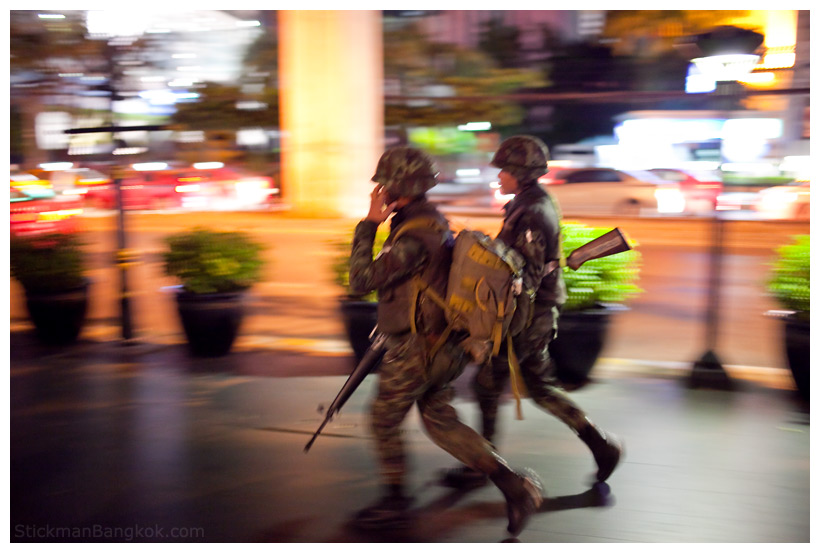 I don't live in the red zone, thankfully, so there is no immediate effect on me. In fact when I stroll outside of my condo and around the neighbourhood you would not know the city was under siege. It is largely business as usual although everyone is talking about the red shirts and living in a very yellow neighbourhood, where there are very few migrant workers and as best I can tell, no low income housing, what is being said about the reds is hardly complimentary.

As far as friends go, one who lives in the Nana area refuses to leave his room at all and another will only go out at night – he commented that all the nasty stuff seems to happen by day. Another friend whose condo is in Sukhumvit soi 7 is very nervous. One pal who lives some way from everything, in an area I would have thought totally safe, is not taking any chances and is going up country to his wife's village for a few days.

As far as businesses in the Nana area go – which is just outside the so-called red zone – some Nana Plaza bars opened last night but it was so quiet that most bars that did open had closed by midnight, Spanky's being the only bar I am aware of that was open until the usual closing time of 2 AM. Those bars that did open had few girls turn up for work. Many of the girls who work at Nana live in the Prakanong / Onnut areas and travel to work by skytrain – not possible for the time being. As one bar owner said to me, they're reviewing everything on a day to day basis.

I hate to criticise, but I am not the only local expat who feels that some of the mainstream media are providing misleading coverage of what is going on. One agency appears to be over exaggerating many things, its local correspondent seemingly rattled at what is going on around him, and, as last I heard, he is still waiting for his private security detail to arrive from the Middle East. One story run by a major American network stated that there had been a run on goods in supermarkets – which was absolute bollocks. I wandered down to the local market and it was business as usual with no stores experiencing a run on goods and everything available as per normal. Hopefully his private security detail will arrive soon and make him more a little more at ease with what's going on around him… 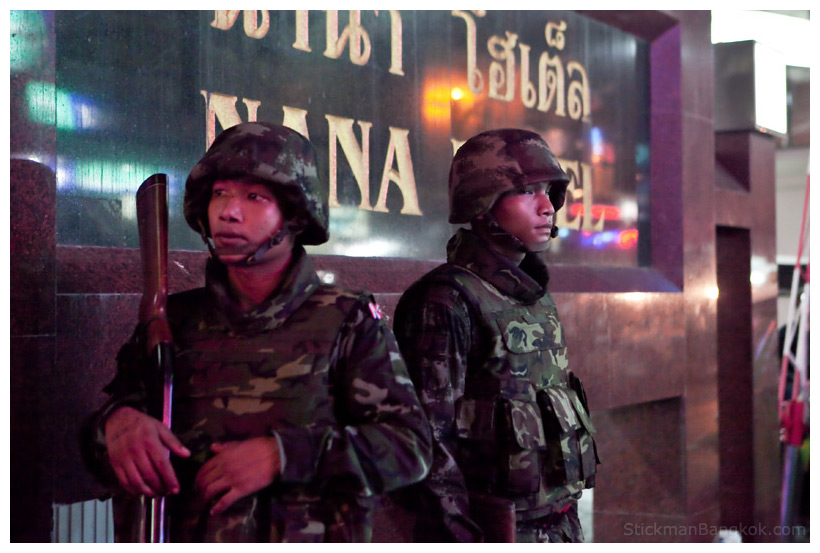 I would reiterate that now is not a good time to be visiting Bangkok unless you have pressing business and you know the city well. The disruptions are great, the chance of something happening very real. To reinforce how serious it is, there's no way I am venturing out to the hot zones at the moment. There have been too many reports of indiscriminate fire and innocent victims. I enjoy life way too much to take a chance up there…