Today's midday wander around Patpong, Silom, Rama 4 and into the red shirts' fortress – which seemed much less menacing by day than it did by night, saw peace and calm. It reinforced to me that the red shirts realise that storming
Silom Road with the army present would be futile.

By daylight troops are visible and seen to be patrolling the streets, although the number we see must account for a small percentage of the goodness knows how many are in the area.

Walking down side sois, and looking up into buildings and car parks you can see soldiers and their equipment everywhere. I don't see any way the red shirts could consider a march on Silom Road. They may not be outnumbered, but there's no doubt
that they're outgunned. 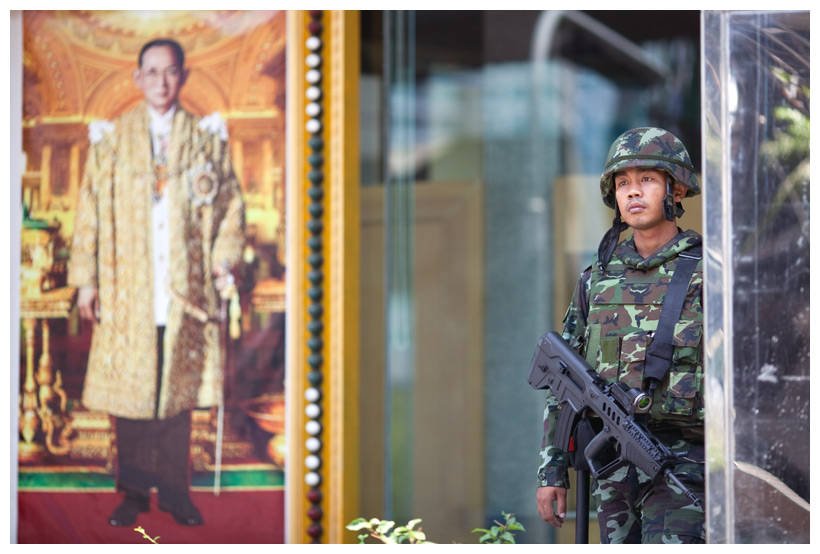 On the other side of Rama 4 Road from Silom at lunch time, a few hundred reds were maintaining a vigil. There's always someone is on the loudspeaker system around the clock, ranting on about this and that. At times it's moderately interesting,
at other times blatant propaganda.

The same can be said for those speaking at pro-government rallies. You can only remain interesting, and interested, for so long and for the red shirt speakers, standing atop a truck in the midday heat, it's hardly the most joyous of tasks. 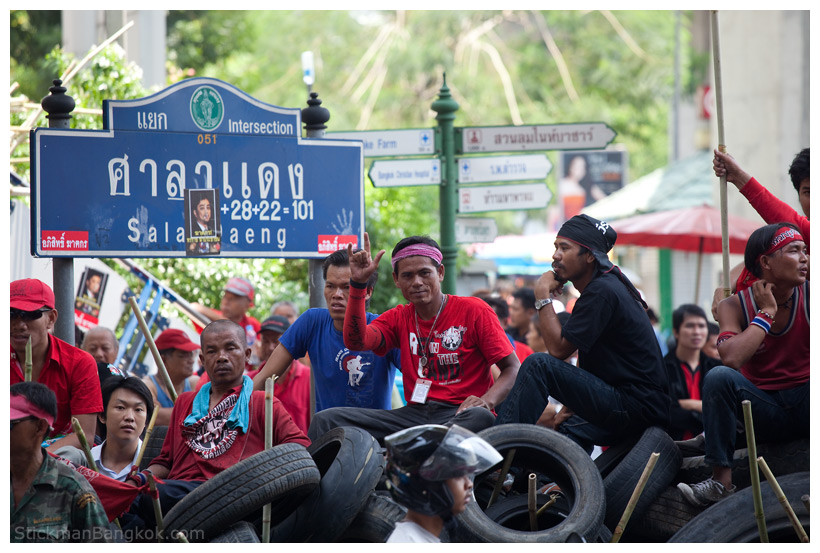 The hardcore red supporters on the front lines seem relaxed enough by day. They pose for photographers and wave at passers by, many of whom obviously support the cause. From time to time they get a bit agitated, possibly something to do with the authorities
lined up opposite, police in riot gear set up outside the Dusit Thani Hotel. 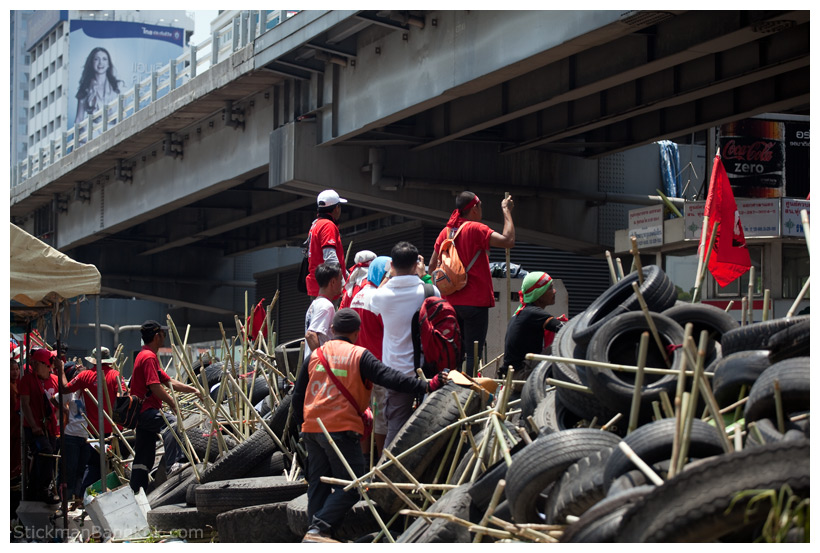 Whilst amongst the reds I had my first scare today when there was the sound of an explosion from the direction of Silom. I jumped, as did those around me. Everyone became jittery and started looking for cover. It takes something like this to know how
you will react. I found myself making a beeline for Rama 4 Road, heading west, in the direction of Hualumpong. I was getting out of there! Fortunately it was quickly announced that it was nothing to be concerned about and calm returned. 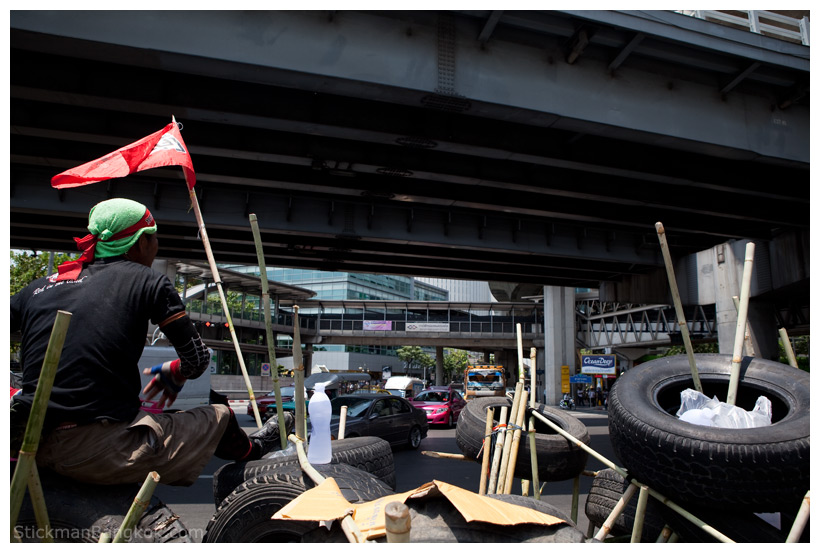 Rama 4 Road is one of the busiest roads in the city and with the reds on one side and the authorities on the other, traffic movement through this intersection is awfully slow at the best of times, but even worse now. There's no shortage of rubberneckers,
as is to be expected, and I am surprised that in all the time I have spent in the area over the last few days I have not seen a single accident, even something as innocuous as a nose to tail. If this section of Rama 4 Road was closed for any reason
it would cause major traffic problems – as if traffic in the immediate area was not bad enough already. 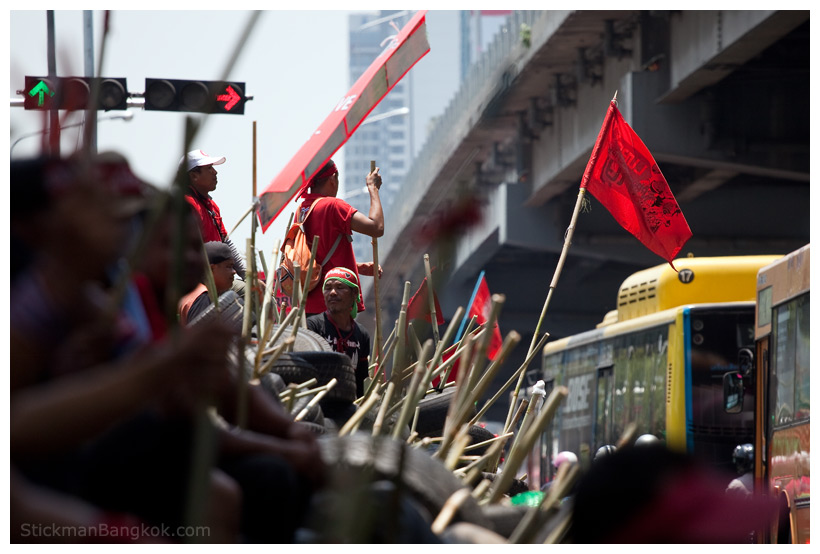 The overwhelming feeling I had today was that the reds had engaged in a lot of chest thumping last night but with the construction of a fortress-like front to their position, they have largely taken up what looks to be a defensive position. They have
guards at the front and plenty of their number on watch.

Just as up the road at the main rally point at Rajaprasong, during the day time the reds' numbers dwindle as many of their number disappear to somewhere more comfortable. As such there is a perception that they pose much less of a threat by day than
they do by night. 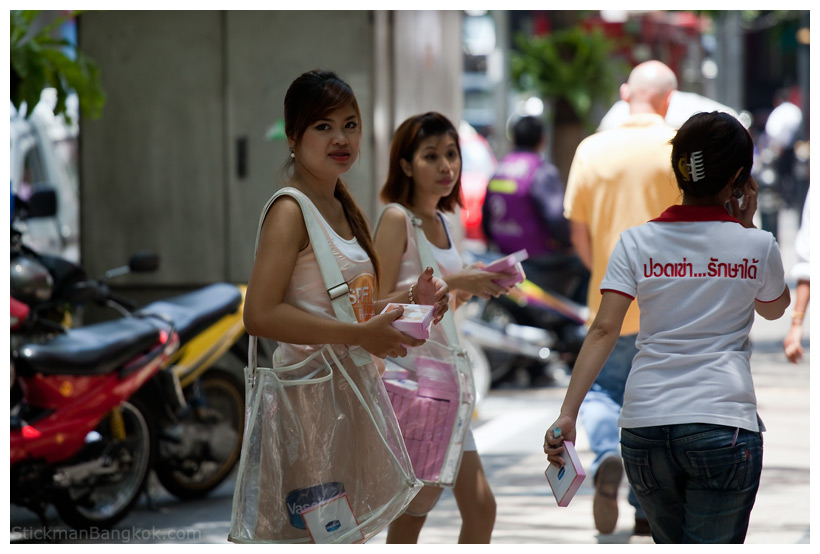 The presence of the authorities in and around Silom has done much for people's confidence and the tension that existed seems to have eased somewhat.

On Silom Road it's business as usual. More and more street vendors are returning and pretty girls are handing out free samples just a stone's throw from Rama 4.

While there are plenty of cops and soldiers on patrol, they are concentrated in certain areas and if you look the other way you might not see them, nor any evidence that they are there.

There seemed to be something of a calm today, which I put down to realisation setting in that the reds cannot realistically expect to take Silom Road. This has done much for the confidence for those who work, live and frequently visit
this downtown area. How long this feeling will last is anyone's guess.