After a couple of days outside Bangkok, I made it back to the Silom, Rajadamri and Siam area today for the first time since Tuesday. I strolled up and down Silom, along the two main Patpong sois, up Rajadamri to the Rajaprasong intersection, around the area out front of Central World Plaza and then along to the Siam skytrain station. What follows is a brief account of what I saw. 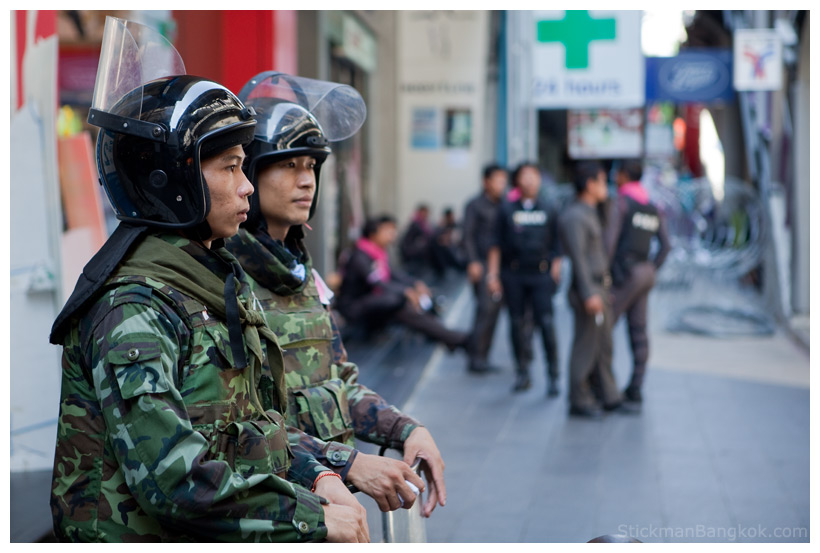 Up and down Silom Road, the area where soldiers were rushed to more than 10 days ago to defend the city's main commercial and financial district, the soldiers and police remain.

At the top of Silom Road, next to the Rama 4 intersection and opposite the area where the red shirts threatened to storm Silom from, there seems to be less of a police presence. Whether this could be interpreted as the authorities believing that the red shirts are less likely to storm the area would be conjecture. But I do imagine that is the case.

Some of the razor wire that had been installed in and around Silom and some of its tributaries has been removed although some remains. Armed soldiers remain in most of the hot spots.

I have to say there seem to be far fewer tourists around, at least at the time I wandered around today. 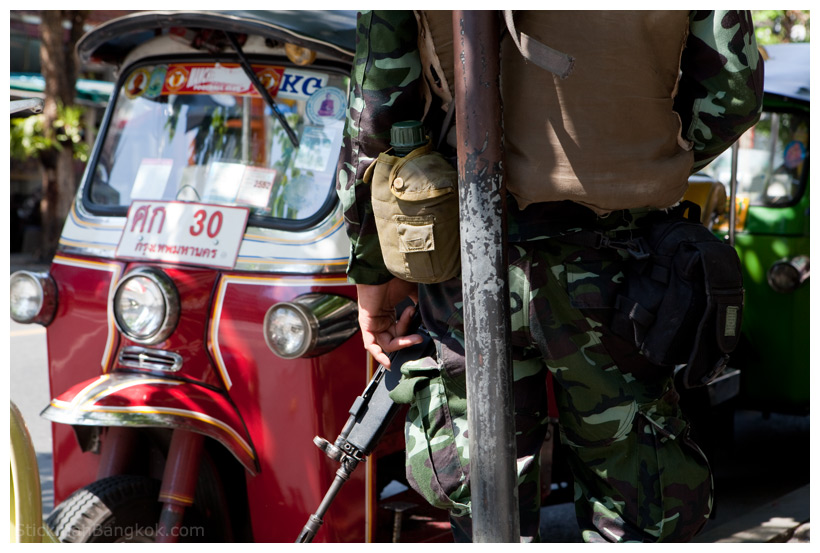 The popular Patpong Night Market reopened on Wednesday night and when I was in the area this afternoon the market was being set up to open as per usual.

While I was out of town the past two nights and did not see for myself, word on the street is that while the night market may have reopened, there were fewer visitors around and the market, as with the bars in Patpong, was very quiet. 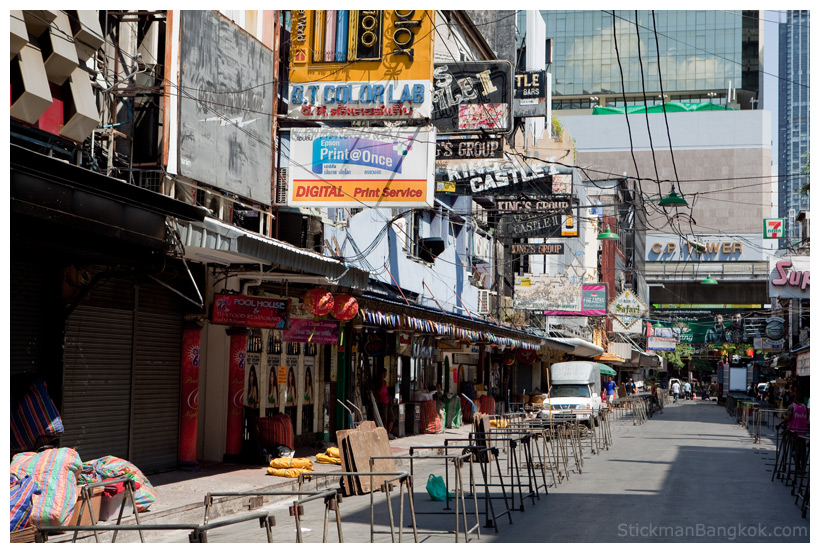 I had been told that the area around Rajadamri had become a cesspit, with piles of rubbish which the city had said it refused to pick up after the red shirts had commandeered four of its vehicles. Rubbish was not strewn everywhere at all. The reds seem to be managing the area well and with the exception of the foul smells in and around the area where the portable urinals are found the area is as clean as anywhere else in the city.

The barricades erected by the red shirts were being lengthened today, further down Rajadamri Road. It has to be said that while they may look impressive, they would provide almost zero resistance should efforts be made to breach them by armed forces. They might slow the forces down a little, but that would be about the sum of the resistance.

The area behind them is messy in parts with some concrete smashed up with piles of stones and rocks piled up, presumably to be hurled at authorities should they attempt to breach the barricade. The rocks looked big enough to do damage if they caught you on the head. 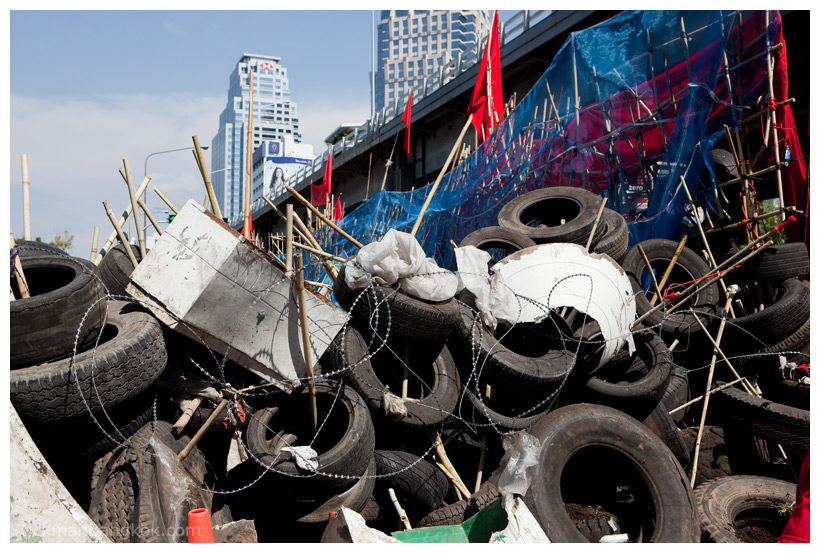 More and more of the red shirts just seemed to be there, lazing around, and really not doing a lot. There may or may not be more red shirt supporters / protestors spread over the protest site now than when I last visited – I really would not like to say one way or the other – but many are just sleeping. They don't seem to be doing much. 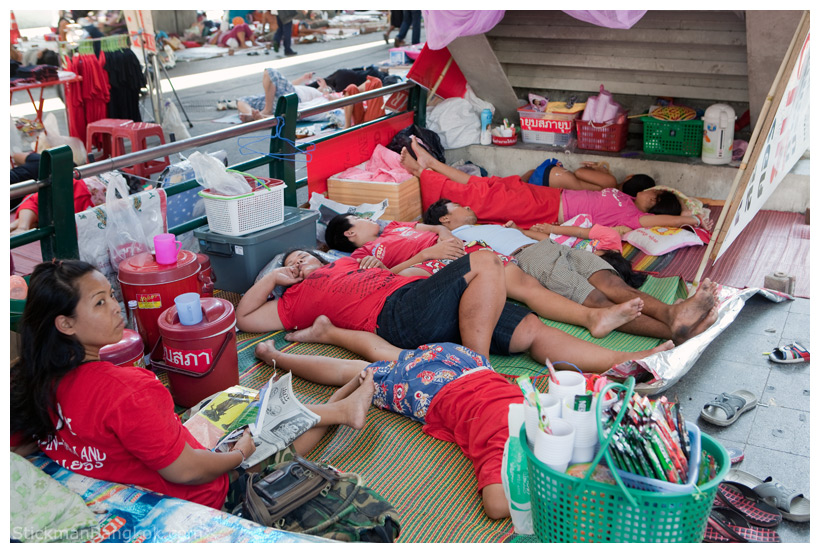 As I walked along Rajadamri Road, I was given a VCD showing what happened on April 10, the day 25 people died in the clashes between the red shirts and the authorities near Democracy Monument. I have not had a look at it yet, but the version I was given has English subtitles. A number of vendors offered copies, clearly keen to spread the message to foreigners.

The general attitudes of red shirts on the ground towards Westerners and other obvious outsiders does not seem to have changed. We're still very welcome. I would not engage anyone in conversation if you're not in favour of their cause though and while the area feels safe enough to me – the recent warnings from many Western governments are completely over the top – for sure one could find themselves in the wrong place at the wrong time.

It seems to me that the red shirts are now working on spreading the word, explaining what has happened so far, from their perspective of course. 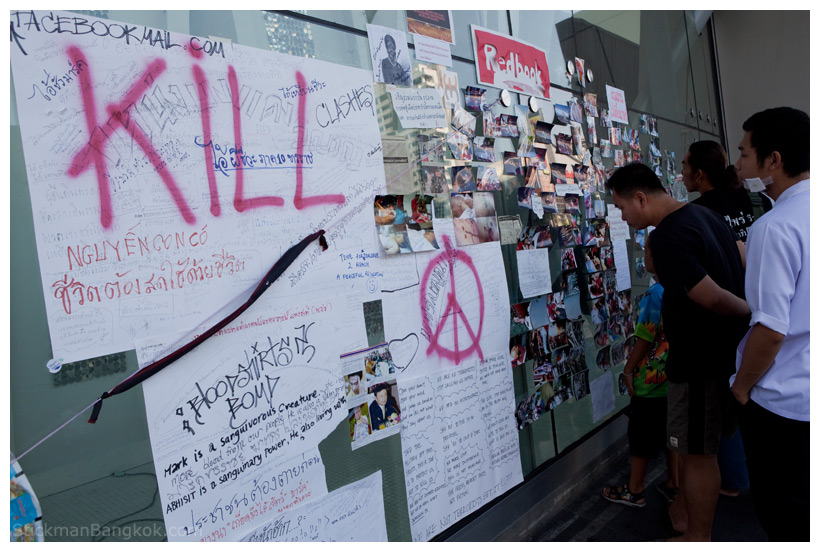 I don't think we will be seeing the authorities storming the site – you can hardly call it merely a site now, for it sprawls in all directions. It's so large that it would be a logistical nightmare to try and clear it and for the most part, the people on the inside are simple folk who just seem to "be there". They don't seem to be doing much. More and more seem to be sleeping. I guess many provide support services, from massage to food to various other support services.

The soldiers and other security forces will obviously have to remain in the Silom area until the reds are eventually dispersed, so I imagine that the sight of soldiers and police in Silom and its surrounds are something we will have to live with for now. It seems that the government's approach is to just wait them out. These people have to be missing their family. It is really hot on the ground, even under their tents.

The skytrain is still running a limited service, from 6 AM until 8 PM daily. That is at all stations.

What got me today is the size of the red shirts camp. It's massive. They're here for the long haul…