“That just sucks” he exclaimed in a North American accent, rattling the padlock firmly hanging on the locked door of the Star of Light to no avail. His favourite back alley bar was closed and didn't look like it would be opening any time soon.

I followed him out to the main Patpong soi, the wide one, the one we think of when Patpong comes to mind, the one sometimes referred to as Patpong soi 1.

The sun would soon be going down and the soi would become a hive of activity as Thai guys scramble around like ants racing to get the night market set up for the evening’s trade. But there was no sign of them. The Patpong night market in what is arguably Thailand's most famous street was closed for business. 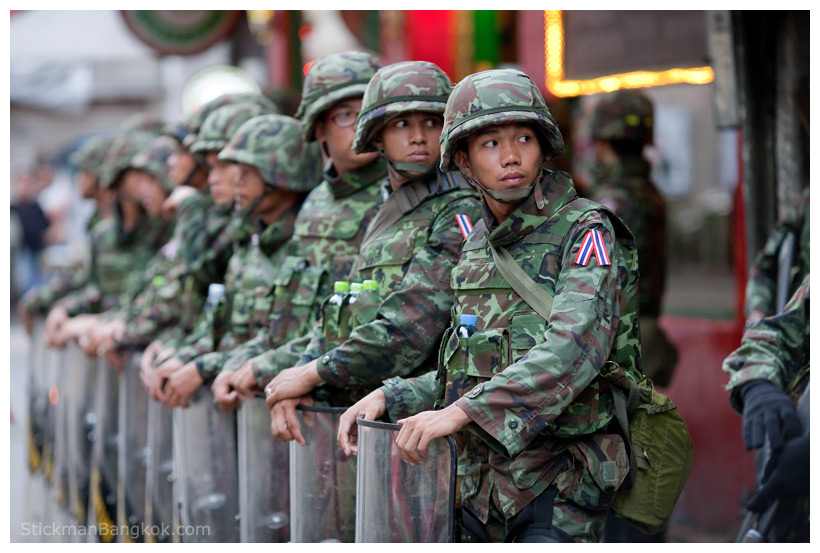 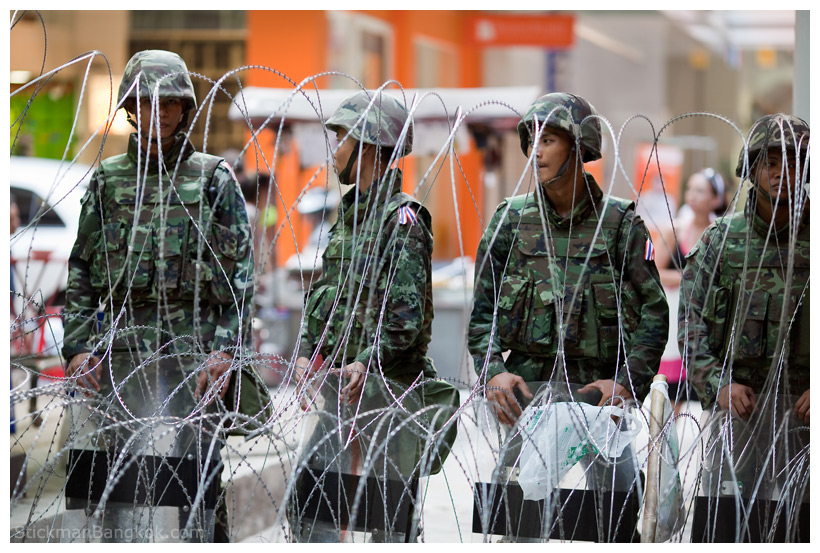 They were in small pockets of between 5 and 20. They were composed, but not entirely relaxed. There didn't seem to be any great urgency about anything. Some were snacking. Some were smoking. Some were gazing at their surroundings, no doubt the first time on the hallowed streets of Patpong for many, a farang nightlife area for sure, but without a doubt, Thailand’s most infamous nightlife district. They all seemed to be armed and many had riot gear, shields and batons in addition to heir rifles. For some their gun was lying by their side as they took a chance to catch up on some zzzz. It would be a long night ahead of them. 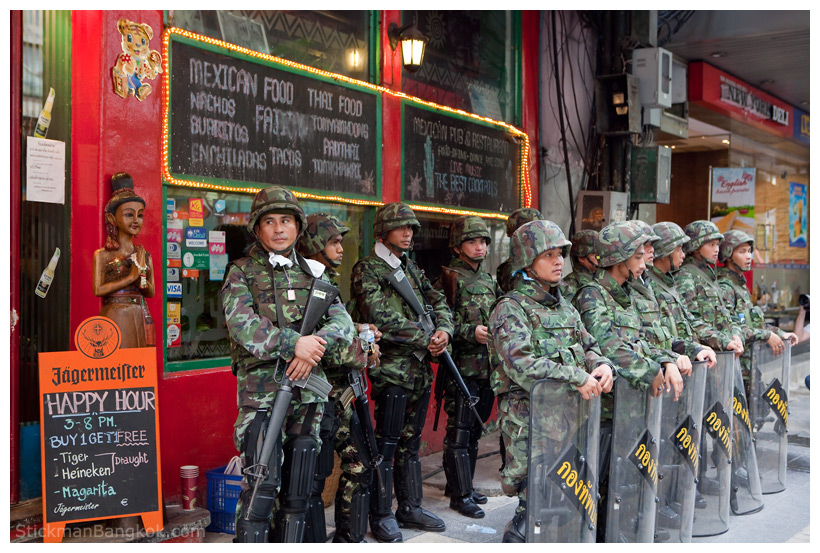 An American girl approached me and asked me for directions to the night market. It’s right here, I replied, waving my arms at the open space where one of Bangkok’s leading tourist attractions had failed to materialise for the first time in living memory. I explained that it looked like it wasn’t going to open tonight, due to the political situation and the red shirts’ threats to storm Silom Road and the heart of Bangkok's commercial district the next day.

So this is what Patpong used to look like, I thought to myself, thinking of a period I never did experience, when Patpong was about nightlife and only nightlife, long before it was reinvented for the mainstream tourist with the arrival of the night market. 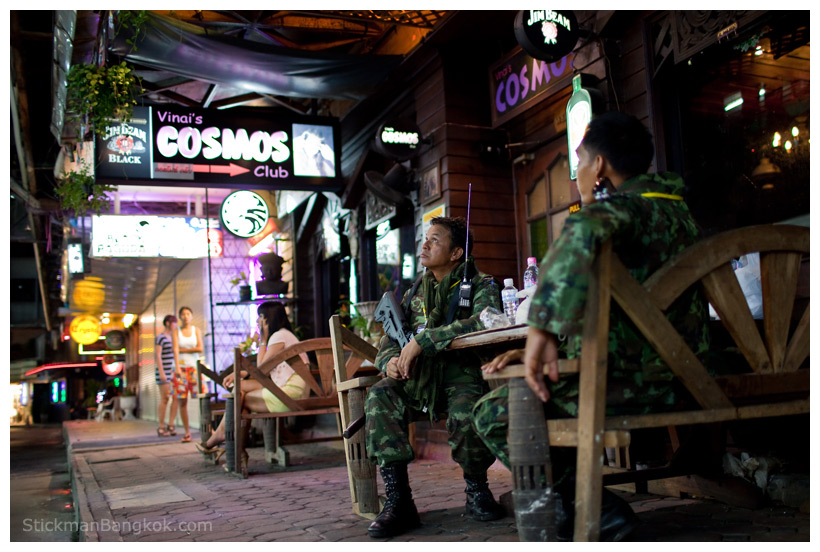 Without the night market Patpong's main soi is unremarkable and loses much of its flavour. If you ever thought Patpong was about nightlife, think again or better still, check it out now. Without the night market Patpong just feels dead, the long soi home to just a couple of dozen of its famed nightlife establishments – most of which were closed tonight.

Around the corner on Silom Road were pockets of soldiers. Some lined up in formation, behind large rolls of barbed wire. Some sitting down, leaning against the walls of shop fronts. Many sleeping, especially those posted up on the skytrain walkways. Some could be seen sitting inside shops savouring the cool air-condition or in driveways leading into underground car parks. Soldiers were all over the place. I wouldn't like to guestimate how many, but there were many. There were also small numbers of police although soldiers appear to outnumber them by a ratio of about 50 to 1. 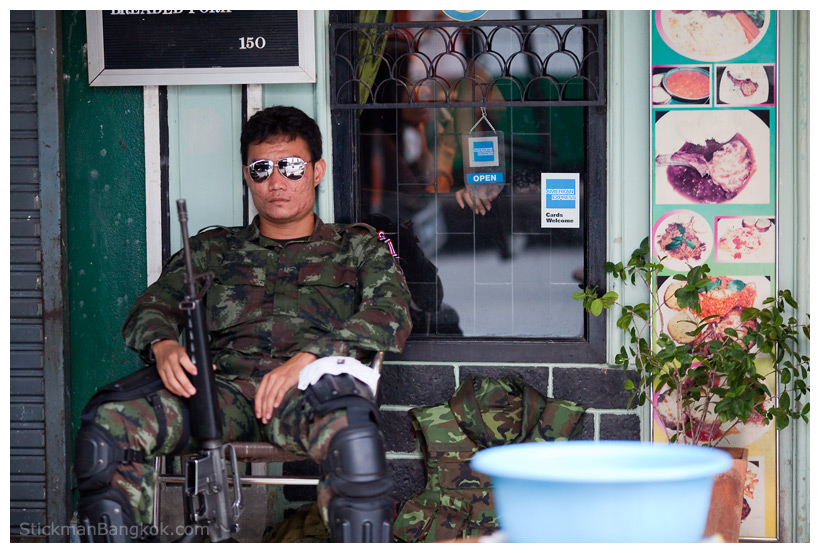 When I looked into the eyes of the soldiers I saw a strange look, not quite despair, but one which suggested they really didn't want to be there. I don’t imagine any of them ever dreamed when they enlisted that they might be ordered to fight against, or at the very least repel, their very own countrymen. Was this not the role of the police they must be asking themselves. There was a forlorn look in the eyes of some. I imagine that even in war, real war, against a real enemy, they would have had a rather different look in their eyes.

The soldiers were very well received by most Bangkokians, many of whom dropped into local 7 Elevens, donut outlets and other nearby stores to purchase drinks and snacks which were presented to the troops who graciously received them with a wai.

Military vehicles were parked up and down Silom, along side streets and in the driveways of buildings. There didn’t seem to be any heavily armoured vehicles and certainly I didn’t see any tanks which aren't exactly strangers to the streets of the Thai capital, but given that the soldiers seemed well-equipped it’s hard to see such heavy duty equipment being necessary. 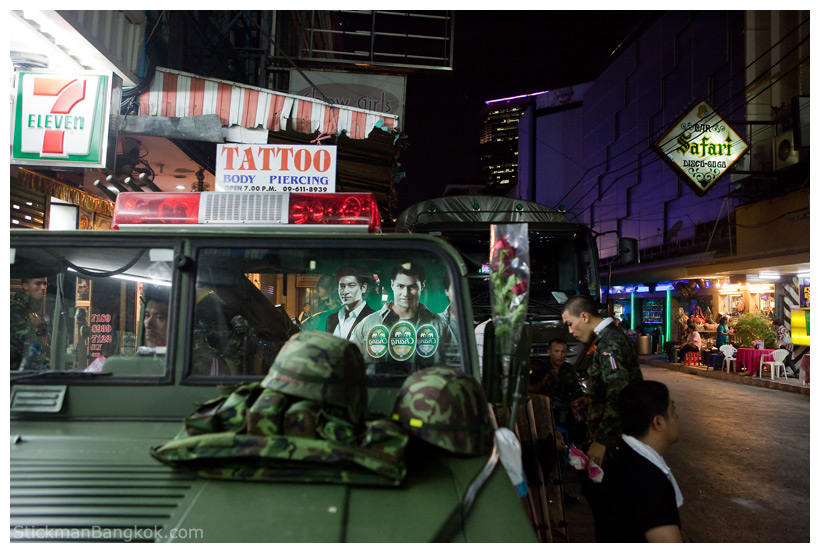 On the overhead skytrain walkway that connects the Sala Daeng skytrain station with the Silom underground were many soldiers, all armed. Whether they had real ammo or just rubber bullets, who knows. I am not military guy so I wouldn't know.

At the northern end a black mesh had been draped over the side of the walkway so you could not look down at the red shirts who were assembled across at Lumpini Park.

Some of the soldiers had insignia or t-shirts stating that they were rangers. The rangers are supposed to be amongst the best of Thailand’s military so it looks like they aren’t mucking around this time. 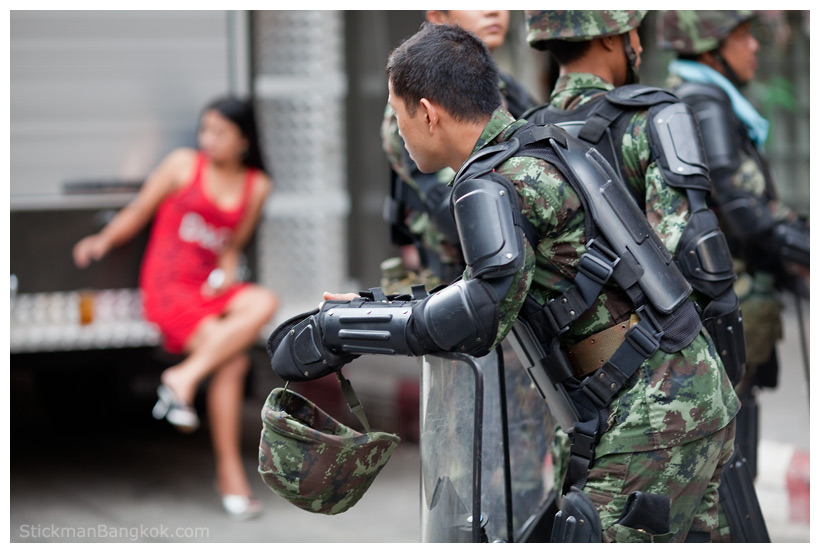 The red shirts had assembled in some numbers – which really didn’t look that significant to me – at the south-western corner of Lumpini Park and all over Rajadamri Road. They had succeeded in shutting down Rajadamri Road and have been threatening to storm Silom Road, part of the main commercial district in Bangkok. I wouldn't like to estimate the numbers that were there late afternoon, but it didn't seem to be that many. Of course the main occupation at the Rajaprasong intersection is only a mile or so up the road from where reinforcements could be called – and there are many thousands there.

The police and the military have largely taken a softly, softly approach when dealing with the red shirts so far but that approach has come under heavy criticism. There is very much a growing backlash against the government from within its supporters who are displeased at the government’s failure to repel the red shirts from their occupation of Bangkok which is causing untold problems from transport difficulties to lengthy business closures to massive disruption to tourism and a loss of confidence in Thailand as a whole. 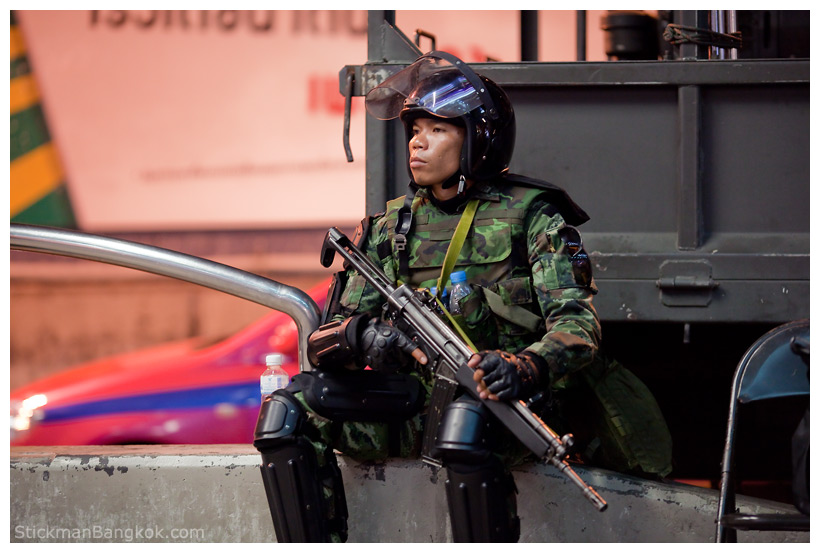 The authorities’ inability to deal with the issue has become something of an embarrassment and part of the response from the Prime Minister has been the shuffling of the head of the army to also head the Centre for the Resolution of Emergency Situations. It is his job to deal with this most difficult of situations.

Things are getting hairy and Tuesday could well be the big day. It looks like the authorities are determined to defend Silom – and with it Bangkok and Thailand's major business district. I also think it’s fair to say that the vast number of Bangkokians have had enough and want to see some action. At the risk of sounding crass, Tuesday promises to be very interesting indeed. 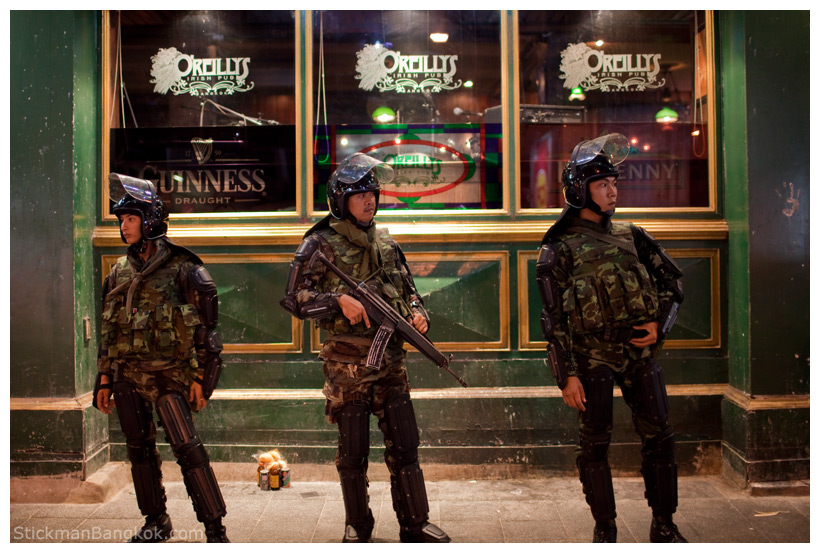 As far as the Silom entertainment area goes, an area where many foreigners, particularly expats, flock to, most bars – by this I mean regular bars as opposed to the naughty places – remain open. The popular British pubs like O’Reilly’s, Molly Malone’s, the Duke of Wellington and all the other expat bars in the area that I walked past seemed to be open. Silom Soi 4, Bangkok's gay centre was lit up and it appeared to be business as usual. While many venues may remain open, it's quite perturbing to see heavily armed troops with riot gear standing outside!

As far as the naughty bars of Patpong go, about a third appeared to be open. Some bars opened up and then decided to close, Club Electric Blue on Patpong’s soi 2 being one example. All of the King’s Group bars seem to be closed. 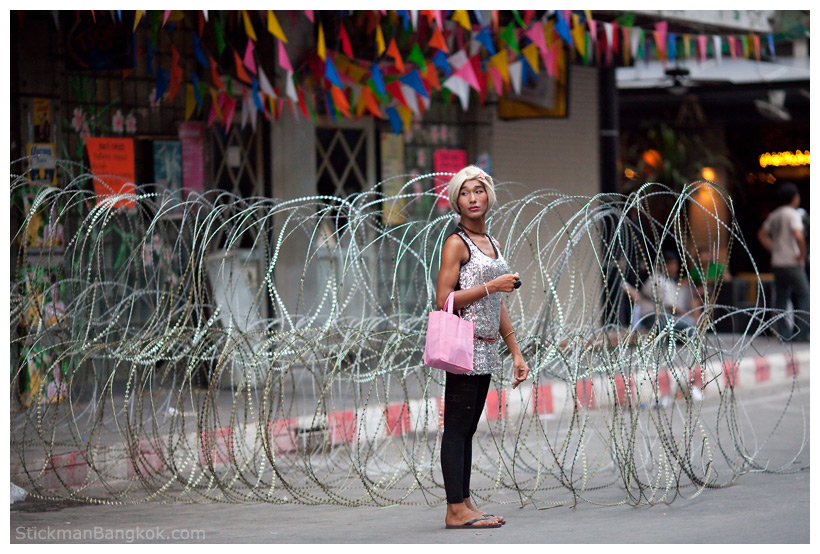 The usual odd characters were wandering around, the local loonies, ladyboys and freelancing prostitutes, none of whom seemed particularly concerned about what was going on and were quite happy to proposition passers by with a smile!

As per the photo below, Patpong didn't resemble its usual self in any way. It felt like just another Bangkok back soi, far from the most famous lane in all of Thailand. 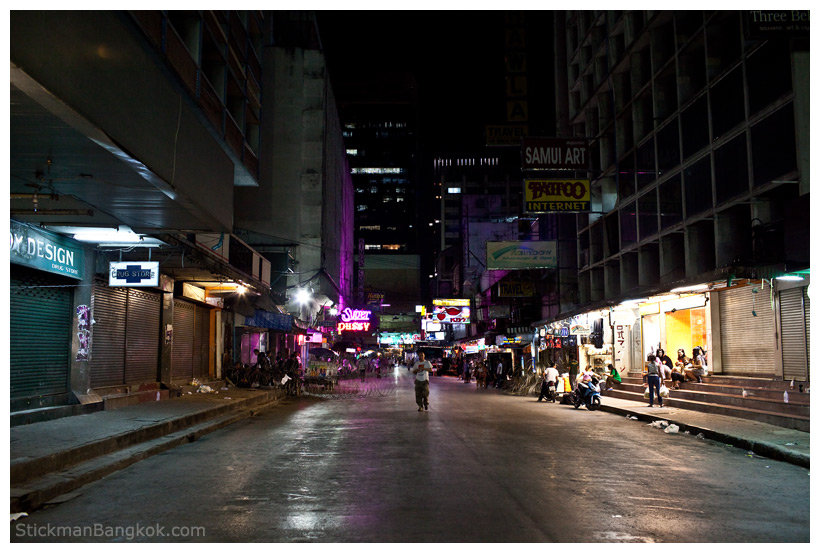 Of all of Thailand's foreigner-oriented nightlife areas, Patpong is tout central and it was amusing to see the touts walking around looking lost with few potential customers to con.

It’s hard to see bars breaking any records tonight with most bars that I stuck my head in without even a single customer. Even some of the back alley bars in Patpong soi 2 like Star of Light were closed. Super Pussy and Kangaroo Club both had piles of barbed wire right near their entrance which can't have done anything for trade. 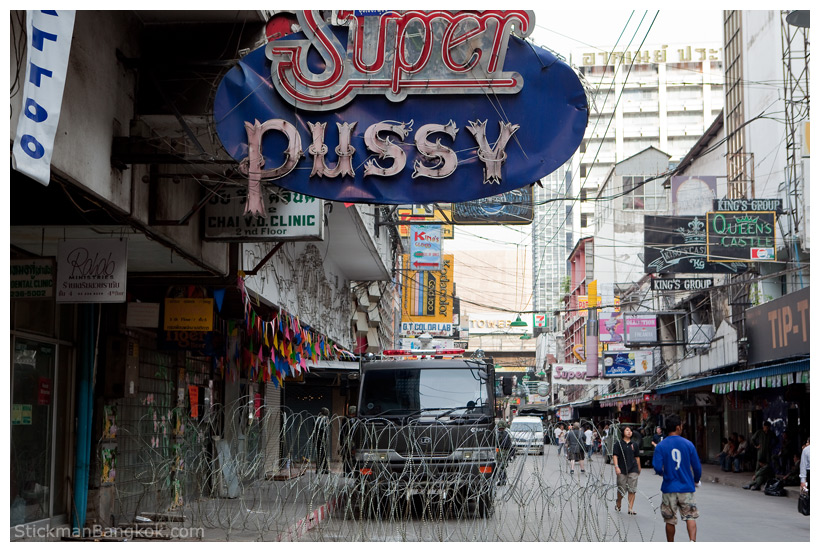 It might be wise to avoid the Silom area on Tuesday. It’s unclear what will happen next and with the red shirts threatening to storm Silom Road and head for the main branch of the Bangkok Bank. With so many military in the area anything could happen.

The red shirts were present at the southern tip of Rajadamri Road, just on the other side of Rama 4 Road, on their loud speaker system, ranting about the status quo and cheering on their hero, deposed Prime Minister Taksin Shinawatra. The mood amongst them was as ever jovial as these photos taken late afternoon show. 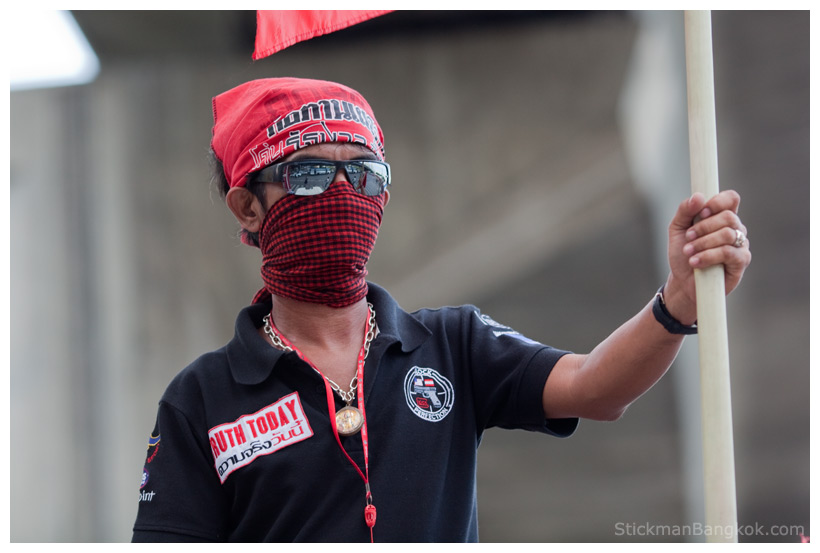 In addition to the threat of the red shirts storming the area, there have also been threats from pro-government groups who are threatening to do something if the reds aren’t cleared from their occupation spots soon. Things could get messy. 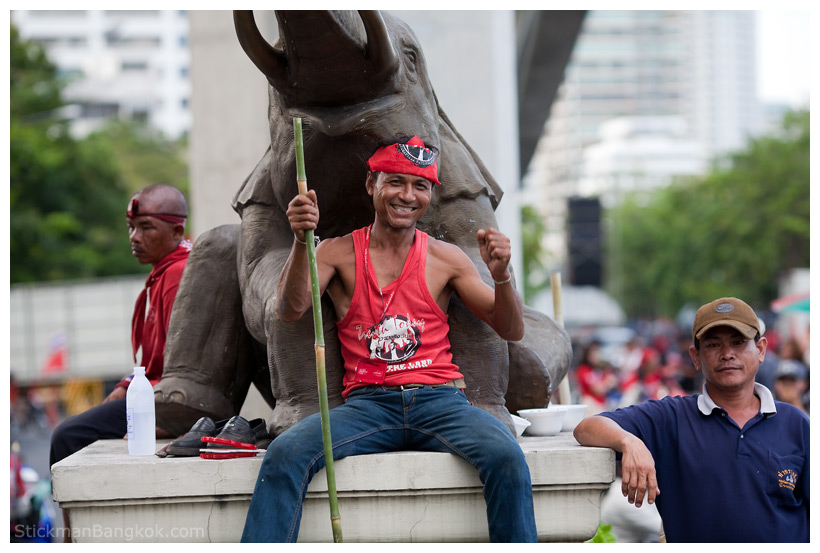 Despite the smiles from the friendly locals, both the red shirts as well as the soldiers and police – who tend to be solemn but will smile if you grin at them for long enough – things are very volatile at the moment and there is a tension in the air like I have not felt before. 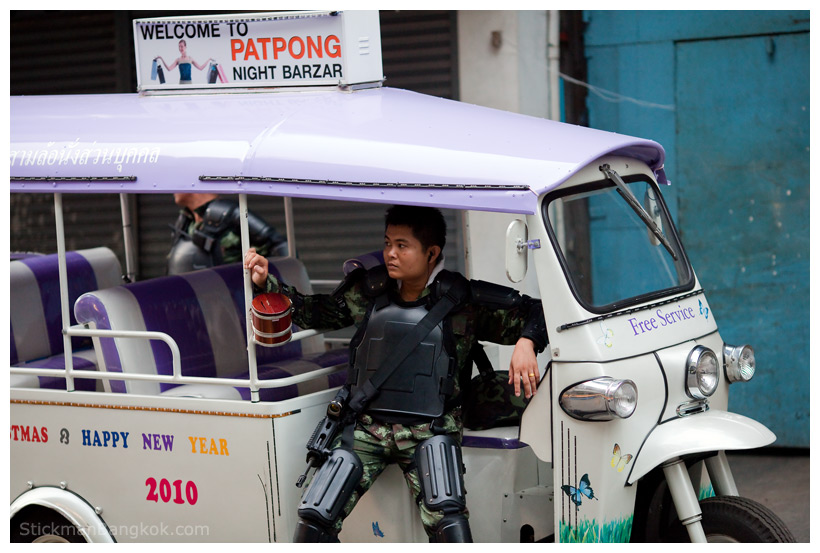 For the time being the Patpong night market is closed and about 2/3 of the naughty bars are closed too. How long things will remain this way, who knows? I guess it will largely be a day by day thing.

In other parts of the city, the number of reds has increased markedly at the Rajaprasong intersection and they seem to have spread out a little further taking over more and more street space. The city's best shopping malls remain closed. 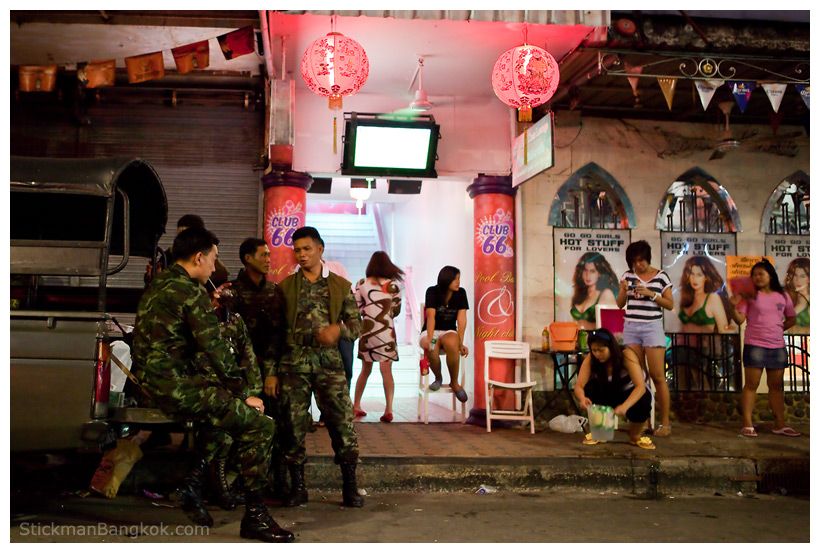 As far as safety goes, it felt safe enough in Silom Road and Patpong tonight but if the reports of a red shirt invasion of Silom Road really are true, Tuesday could get rough. I would not recommend going to the area unless you have to – and there really is probably no reason to be there. There's little in the area that cannot be found elsewhere.

I couldn't help but feel there was something of an adventure tourism feel to the area with many foreign visitors roaming around snapping photos of troops on the street in the heart of Bangkok. That said, remember it is only 10 days ago that bullets were fired and innocent people died. None of us wants to end up in the firing line.

It's anyone's guess what will happen next. The military presence is significant and while I really don't like to speculate, I just got the feeling that they aren't going to be a push over this time.

* Update Tuesday morning April 20: It appears the heavy military presence in the Silom Road area has had the desired effect and the red shirts appear to have cancelled their plans to protest there.