I returned to Silom Road today expecting a calmer scene than what I had found yesterday. After all, while the red shirts continue to protest at the bottom of Rajadamri Road, just 30 odd metres of Rama 4 Road tarmac separating them from Silom Road, they have been essentially forced to abandon their plans to storm Silom Road with the huge military and police presence in place and the government vowing that they will defend any attempt to storm the main business district.

I may be mistaken, but there seemed to be more troops about, at least out in public – and you just know that there were hundreds and hundreds hidden in the shadows, in abandoned buildings as well as commandeering multiple floors of some car park buildings. While the threat of the red shirts storming Silom on Tuesday appeared to have gone, the soldiers and police remained in edge. 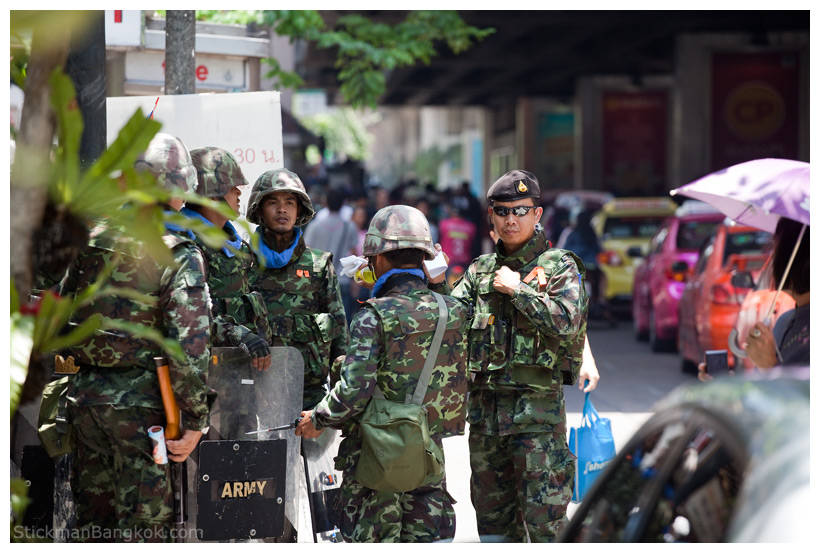 At what I guess you would call the outer perimeter of the area they are patrolling, which is roughly Rama 4 Road to the north, Suriwong to the West, Sathorn to the east and Chongnonsee to the south, you had police at the outer edges with their familiar checkpoint signs, and a short distance within the perimeter are the army, tooled up with all sorts of weapons and multiple layers of strategically-placed barbed wire.

The red shirts have been demonstrating for more than 5 weeks. They started their occupation at the Phan Fa Bridge which has been followed by occupation of the Rajaprasong intersection where their numbers appear to have swelled – and which is now the main point from which they are demonstrating.

Their occupation in what is one of the busiest intersections in all of Bangkok, and arguably the heart of the city, is causing not just great inconvenience, but much angst not only to tourists, but to the residents of this city. Thais can be a fairly tolerant bunch but Bangkokians are now coming out and saying that they are fed up with the ongoing disruptions to their city and their way of life. And they are responding.

There have been reports in the mainstream media of pro government groups demonstrating against the red occupation and today at Silom Road at lunch time there was a show of support for the status quo, a thumbs up from Bangkokians for the Democrats-led government. 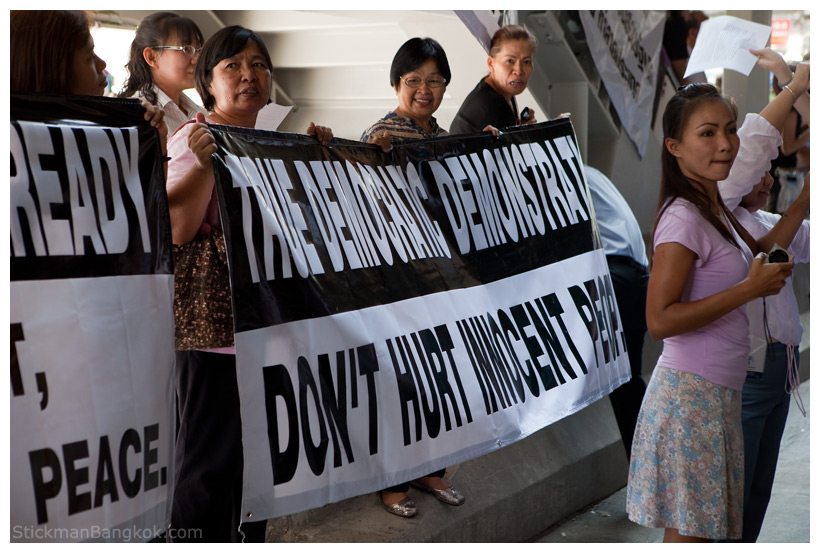 I had been strolling around Silom Road, just taking in the scene when all of a sudden something started happening below the Sala Daeng skytrain station, right out in front of Silom Complex. In a matter of minutes, what had been a bunch of loose bystanders was replaced by a bunch of pro-government supporters erecting banners in both English and Thai in support of the current situation. For the most part it was women involved, young women, many of whom looked like they were what we refer to as office girls.

They were organised and within no time a truck had pulled up and two speakers (leaders?) started ranting about the present situation and ranting against former prime minister Taksin Shinawatra. The more the speakers ranted, the more the crowd cheered. 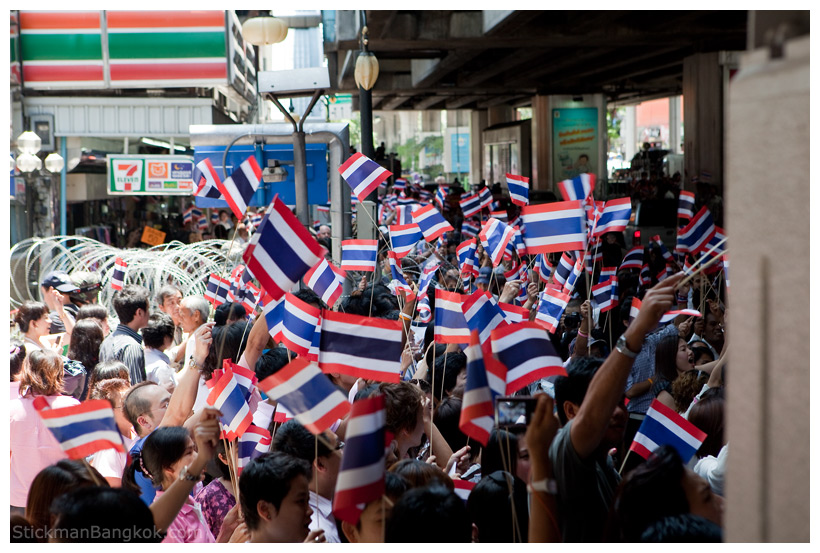 Silom Complex has many restaurants and is full of office workers at lunch time and the crowd swelled considerably as officer workers wolfed down their meal and came outside to see what was going on, many joining in the mini rally. Thai flags were handed out and waved ferociously in a sign of pride and togetherness as a wave of national unity reverberated amongst the hundreds who stopped to watch and listen.

Leaflets were distributed – in Thai only – and the main points were summarised on the banners. This group maintained that they understood the reds' point of view but disagreed with it. They asked that Taksin stop hurting his motherland and they implied that the reds' protests should stop for it is hurting innocent people. They also said that the red shirts should wait until next year when there will be a general election. There was a plea for peace in Thailand.

I may be neutral and daren't comment on the merits of either side, but there was no denying that there was something in the message this group was sending. 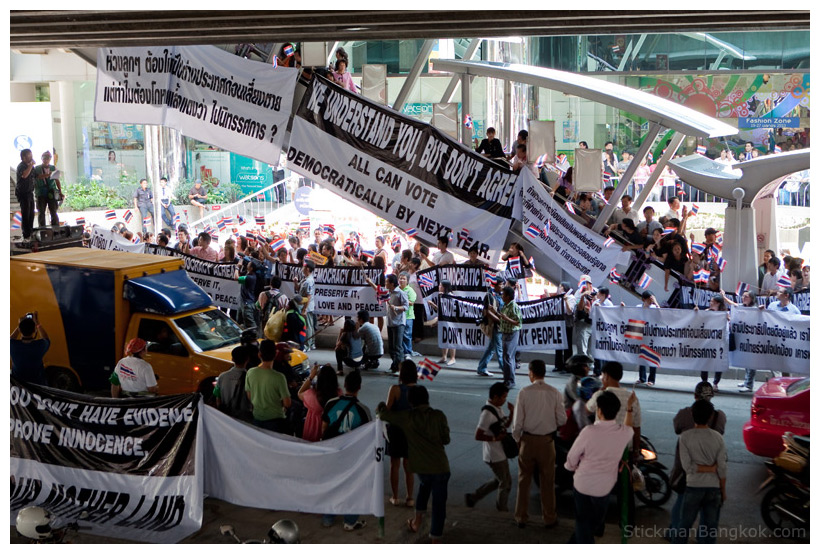 Whereas the red shirts seem to be dominated by country people, often older folk, this small group was predominantly female, predominantly young, and for the most part seemed to be well-spoken. I was approached out of the blue by two different women, each of whom launched into a compelling speech in absolutely fluent English about why they were there and what they were trying to achieve. I nodded, smiled and wished them well, not willing to say anything much one way or the other. 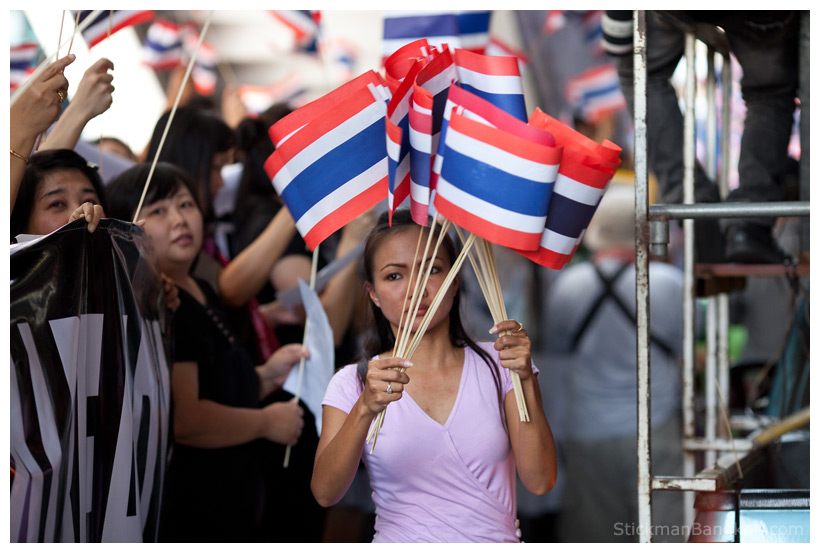 This mini rally was held perhaps 300 metres south of where the red shirts are camped out in front of the main entrance into Lumpini Park. Fortunately there were large numbers of police and army in between the two groups because for sure, they are diametrically opposed.

No sooner had this mini rally started than it stopped. They were there for perhaps an hour and then they all just seemed to drift away into the buildings, out of the oppressive midday heat.

I really do hope some sort of happy compromise can be achieved, both sides appeased and happiness and peace return…